Ukraine now said to be losing up to 200 fighters daily 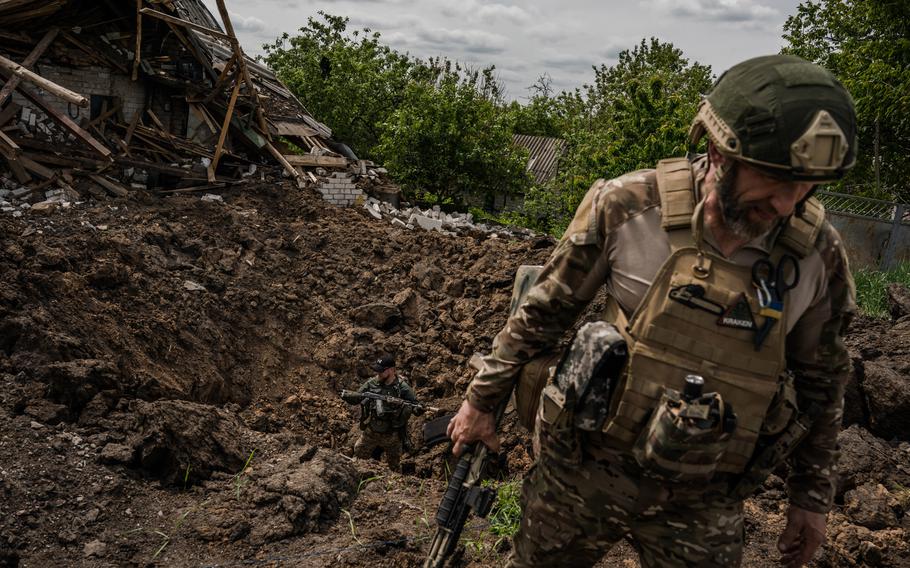 Ukraine is losing between 100 and 200 fighters daily on the battlefield as a Russian barrage pummels the country’s east, according to an aide to President Volodymyr Zelensky. About 10,000 civilians are trapped in the eastern city of Severodonetsk, the latest focus of the Kremlin’s offensive, while Russian forces are also moving toward Slovyansk and Kramatorsk, where the boom of artillery shook the two towns.

“The Russian forces have thrown pretty much everything non-nuclear at the front and that includes heavy artillery, multiple rocket launch systems and aviation,” Mykhailo Podolyak, a senior adviser to Ukrainian President Volodymyr Zelensky, told the BBC Thursday.

Podolyak’s estimates are greater than officials have previously reported. Last week, Zelensky said Ukraine’s daily losses amounted to as many as 100 soldiers killed and 500 injured.

Being largely outmanned and outgunned is leading to Ukraine’s high casualty rate, Podolyak said, as he made an appeal for the West to provide more weapons.

“Our demands for artillery are not just some kind of whim … but an objective need when it comes to the situation on the battlefield,” he told the BBC. Ukraine, he added, needs up to 300 rocket launch systems to match Russia’s capabilities.

On Friday, a British lawmaker said that two captured Britons who had been fighting against Russia and were sentenced to death by separatists in Ukraine were “essentially used as hostages,” calling for their release in a prisoner swap.

A tribunal in the Russian-backed, separatist Donetsk region sentenced the two British nationals and a Moroccan man to death, Russian state media said Thursday. Aiden Aslin and Shaun Pinner of Britain and Brahim Saadoune of Morocco were charged as working as foreign mercenaries by a court that is not internationally recognized in the self-declared breakaway region.

The families of Aslin and Pinner have said they had lived in Ukraine for years and officially fought alongside the Ukrainian military, while Saadoune reportedly had arrived in Ukraine as a student.

“These are not mercenaries,” Robert Jenrick, a British lawmaker who represents the constituency of Aslin’s family, told the BBC on Friday. “They joined to serve in the Ukrainian armed forces, were captured and should be treated as prisoners of war,” he said. “Instead, they’ve been put on this show trial.”

Jenrick called on the British foreign secretary to raise the case with the Russian ambassador, while adding that any negotiations for a prisoner exchange would primarily happen between Kyiv and Moscow. “I hope a prisoner swap can be negotiated quickly,” he said.

Also Friday, a Moscow-backed separatist enclave in Luhansk declared it will start sending grain to Russia via rail, amid the Kremlin’s blockade of Ukrainian crop exports that threatens to disrupt global food security.

“More than 3,000 tons” of grain will be shipped out of the eastern region after Russian forces “liberated” a slew of grain elevators, Yuri Pronko, the agriculture minister of the self-declared Luhansk People’s Republic, said Thursday, according to Russian state-owned news agency Tass.

Since March, Ukraine has accused Moscow’s forces of stealing vast stores of grain and exporting them to Russia. On Monday, U.S. Secretary of State Antony Blinken said credible reports showed that Russia is both “pilfering Ukraine’s grain exports to sell for its own profit” and “hoarding its food exports” - two actions that have led to a sharp increase in global grain prices and looming shortages across Africa and the Middle East.

Ukrainian President Volodymyr Zelensky called on Thursday for Russia to be excluded from the U.N. Food and Agriculture Organization.

“There cannot be even a question of Russia’s continued membership in the FAO,” Zelensky said. “What is there for Russia to do if it’s working for starvation of at least 400 million people and, at most, a billion people?”

Russia also threatened that the continuation of cyberattacks against government websites and state-run media could escalate to direct military combat.

Andrei Krutskikh, the Foreign Ministry’s top cyber expert, accused the United States and Ukraine of coordinating attacks against Russia’s information infrastructure, warning that by doing so they were “deliberately lowering the threshold for the combat use” of cyberweapons.

“The militarization of the information space by the West and attempts to turn it into an arena of interstate confrontation have greatly increased the threat of a direct military clash with unpredictable consequences,” Krutskikh said in response to a question from a journalist.

Since the war broke out, part of the conflict has spilled into the digital realm and both Ukraine and Russia have suffered losses. Ukraine’s government has endorsed the efforts of volunteer hackers opposed to Moscow, and it is assumed that Ukrainian government hackers have also focused on Russian targets. Meanwhile, the White House in February denied reports that it had been presented with different options of cyberattacks against Russia, Reuters reported.

In May, the Biden administration accused Russia of directing “malicious cyber activity” against Ukraine, including an attack on a commercial satellite communications network.

Russia has also faced a slew of security breaches. Throughout its invasion of Ukraine, hackers have plundered the country’s personal financial data, defaced websites and handed decades of government emails to anti-secrecy activists abroad, The Washington Post previously reported.

On Monday, state-owned news agency RIA reported that the website for the country’s Ministry of Construction, Housing and Utilities had been targeted - with a sign reading “Glory to Ukraine” popping up when searching for the site. Two days later, the Ukrainian anthem played from a Russian radio station after it was hacked, RBK media group posted on Telegram.

“Rest assured, Russia will not leave aggressive actions unanswered,” Krutskikh said. “All our steps will have a measured, targeted character, in accordance with our legislation and international law.”

Also Friday, Britain’s Defense Ministry warned that the battered port city of Mariupol is at risk of a major cholera outbreak, noting that isolated cases of the disease have been reported there since May. This echoes a World Health Organization warning in May.

“Medical services in Mariupol are likely already near collapse: a major cholera outbreak in Mariupol will exacerbate this further,” the ministry said in an intelligence update. It also pointed out Russia’s struggles to provide basic public services in territories it occupies, including access to safe drinking water.

The southeastern city was a focal point of the Russian campaign since the early days of the invasion. By late May, after weeks of bombardment, Mariupol came under Moscow’s full control - granting Russia a key port and a land bridge to Crimea, the peninsula it annexed in 2014.

The heavy fighting resulted in rotting garbage and corpses that have contaminated its drinking water, Mariupol mayoral aide Petro Andryushchenko said Tuesday - leaving thousands of people in the city at risk of dying from dysentery and cholera.

In the southeastern city of Zaporizhzhia, Rafael Mariano Grossi, director general of the International Atomic Energy Agency, Thursday expressed “grave concern” about a nuclear power plant. He said the situation is “untenable” as Ukrainian managers are operating the plant under “extremely stressful and challenging” conditions.