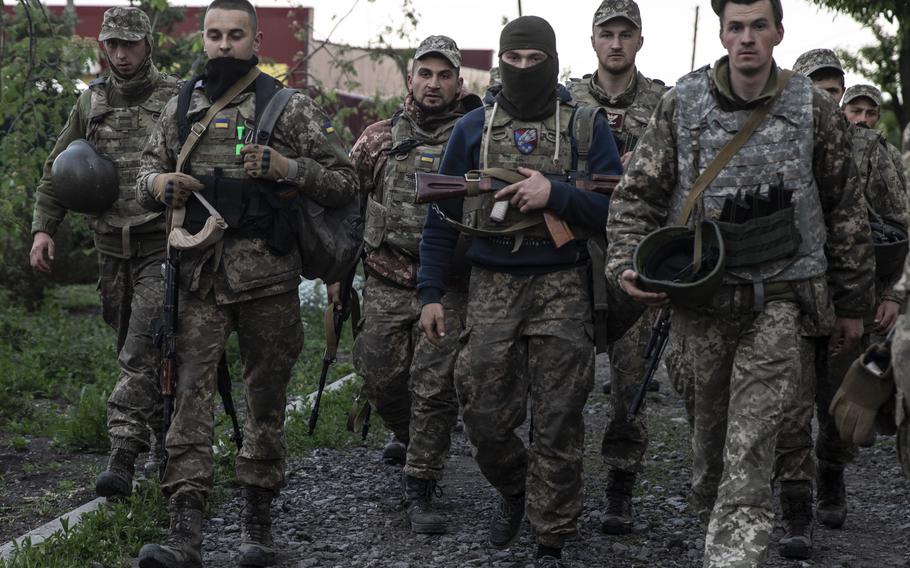 Members of a Ukraine battalion of young soldiers as they return to their base near Kramatorsk, Ukraine, on May 28, 2022. (Heidi Levine/for The Washington Post)

Ukraine said it needs 60 multiple-launch rocket systems to have a chance at defeating Russia, indicating that the number of such weapons pledged by the West so far may not be enough.

Oleksiy Arestovych, an adviser to Ukrainian President Volodymyr Zelensky, told the Guardian that 60 launchers would stop Russian forces "dead in their tracks." Forty would slow them down with heavy casualties, he said, while 20 would increase Russian casualties but leave the battlefield outcome little changed.

The United States and Britain recently announced plans to provide Kyiv with multiple-launch rocket systems (MLRS), which can hit targets up to 50 miles away. Washington is dispatching four M142 High Mobility Artillery Rocket Systems, commonly known as HIMARS, though Ukrainian troops need at least three weeks of training to use them, the Pentagon said. Britain confirmed Monday that it would send an unspecified number of M270 launch systems to Ukraine.

Colin Kahl, the U.S. undersecretary of defense for policy, in comments earlier this month left open the possibility that the United States could send additional rocket systems. No decision had been made as of Tuesday, said a U.S. defense official, speaking on the condition of anonymity because of undecided nature of the issue.

Gen. Mark Milley, chairman of the Joint Chiefs of Staff, will meet Wednesday in the Normandy countryside in France with other chiefs of defense to discuss how best to support Ukraine, the official said. It was not clear whether the issue will be addressed then.

The Kremlin has warned against equipping Kyiv with long-range weapons. Over the weekend, Russian President Vladimir Putin threatened a wider campaign of shelling in response, even as he dismissed their efficacy. Russian Foreign Minister Sergei Lavrov alleged that Ukraine would use the systems to strike targets inside Russia, though the Biden administration has said Kyiv agreed to use the weapons only within its territory. (London has not said whether it has received a similar assurance from Kyiv, but its shipment was made in consultation with Washington.)

Ukrainian leaders "simply laugh at the Americans who said, 'We believe Zelensky, he promised us not to shoot Russia,'" Lavrov told reporters on Monday.

Kyiv has said MLRS shipments are a top priority as it loses ground in eastern Ukraine. Earlier in the war, Ukraine successfully repelled Russian forces trying to seize the capital and other major cities. But Moscow has notched some recent victories in the flat lands of the east with the support of its long-range artillery systems, with pummeled Severodonetsk becoming the latest city in danger of falling under Russian control.

Ukraine has used Western-supplied equipment to great effect. Kyiv claimed several high-profile battlefield victories against Russian tanks and ships with its use of materiel such as Javelin missiles and British Next Generation Light Antitank Weapons (NLAW).

Ukraine's navy said this week that it had pushed ships from Russia's Black Sea Fleet back about 60 miles from the Ukrainian coast. The Institute for the Study of War, a Washington-based think tank, said anti-ship missiles provided by the West could have helped Ukraine regain control of portions of the northwestern Black Sea.

"The war in the east at the moment is being shaped by the role of artillery," said Mick Ryan, a retired Australian army major general, adding that 60 MLRS weapons would allow Kyiv to replace potential combat losses while conducting training.

The estimated 50-mile range of the U.K.- and U.S.-supplied MLRS weapons exceeds that of the howitzers that Russia is using and would give Ukraine a "much wider area of coverage for short-notice fire missions," he said.

The Washington Post's Dan Lamothe in Carentan, France, contributed to this report.