What to know about Severodonetsk, the Ukrainian city Russia wants to capture 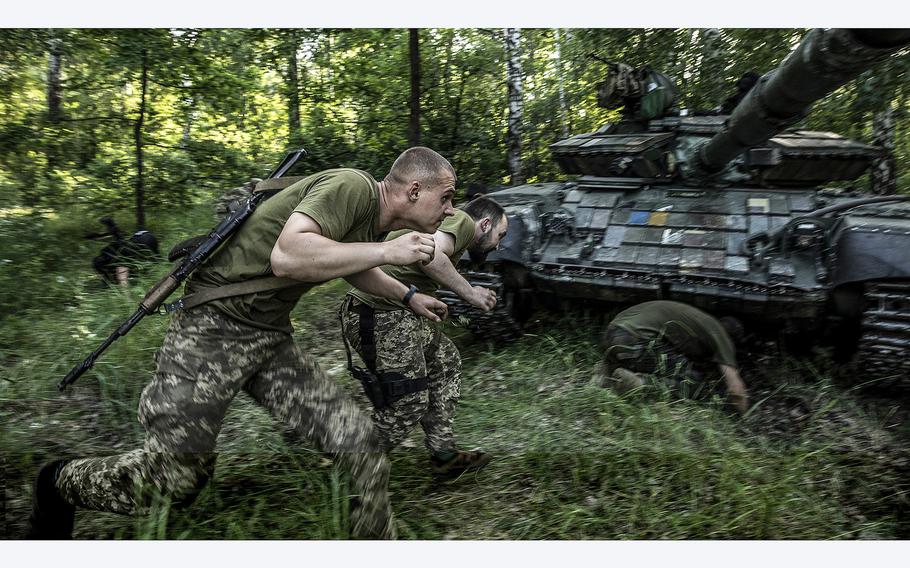 Ukrainian soldiers scramble to take cover under a tank during an intense bombardment of a suspected Russian cluster shelling that targeted their artillery position near a road that leads to the eastern city of Lyman, Ukraine, on June 2, 2022. Russia has officially announced that they now control eastern Ukraine’s strategic town of Lyman in Donbas. (Heidi levine/Washington Post)

The eastern Ukrainian city of Severodonetsk has emerged as a focal point of Russia’s war in Ukraine in recent weeks. Fierce fighting continues to rage there as Ukrainian troops seek to prevent Russia from seizing the entire city.

Russian forces have pounded Severodonetsk with artillery, wreaking immense damage as part of a scorched-earth assault on the east that is inflicting massive casualties on Ukrainian forces. Russian troops entered the middle of the city Monday and are battling Ukrainian soldiers on the streets.

Serhiy Haidai, the regional governor of Luhansk, said earlier this week that as much as 70% of Severodonetsk was in Russian hands.

The city is key to Moscow’s aim of capturing Donbas, an area encompassing the eastern Ukrainian regions (oblasts) of Luhansk and Donetsk. Russia has concentrated its forces around Severodonetsk, the U.K. defense ministry said Friday. Russian forces will likely take control of Luhansk in the next two weeks, the ministry said, but at a steep cost.

Here’s what to know about the strategic city.

Q: Where is Severodonetsk?

A: After failing to take Kyiv in an all-out assault across Ukraine in the early weeks of the war, Moscow in April pivoted its focus to the east - specifically, capturing Donbas. Severodonetsk, sometimes spelled Sievierodonetsk, is located in Luhansk near the boundary with Donetsk, about 90 miles south of the Russian border. It sits near the Donets river, which cuts across eastern Ukraine.

The battle for Severodonetsk is a continuation of the struggle that began with Russia’s invasion of Ukraine in 2014. Since then, the region has been divided into territories controlled by the Kyiv government and by Russia-backed separatists, with protracted fighting over the past eight years along the “line of contact.” After separatists captured the city of Luhansk, which had been the administrative capital of Luhansk oblast, Ukraine made Severodonetsk the administrative capital.

The city had a prewar population of about 100,000. The Donbas region is known as Ukraine’s industrial center, and Severodonetsk contains several factories as well as the Azot chemical plant, one of Ukraine’s largest manufacturers of nitrogen fertilizers. Before the war, the fertilizers produced there were exported around the world.

Q: Why is it strategically important?

A: Russian forces pushed past the line of contact to capture almost all of Luhansk in recent months. Severodonetsk is one of the last cities standing in the way of Russia controlling the region. The city offers strategic advantages, including its location on the Donets river.

It’s also one of the three cities Russia needs to claim victory in Donbas, Michael Kofman, director of the Russia studies program at the Virginia-based CNA, told The Washington Post last month. Russia has been trying to cut off Ukrainian troops there from their supply lines to the west.

Taking Severodonetsk would help Russia attack the neighboring city of Lysychansk and secure full control of the Luhansk region. From there, they could move southwest to Donetsk.

But the Donets river continues to serve as an obstacle to Russian troops’ advance to Lysychansk, located on the other side of the river, and into Donetsk. Haidai, the Luhansk governor, said Saturday that Russian forces were blowing up bridges to prevent Ukraine from bringing in reinforcements or aid.

Meanwhile, problems with combat power and morale have contributed to Russia making only incremental progress in neighboring Donetsk, according to the Institute for the Study of War.

To Ukraine, holding onto Severodonetsk would prevent the Kremlin from clinching a major win in a war that has otherwise dragged on longer than expected and come at significant cost to Moscow.

Haidai told local media Friday that Ukrainian forces had managed to regain control over 20% of the city. But Ukraine appears likely to withdraw from the city to reinforce its troops elsewhere, rather than mounting a desperate last stand as its forces did in Mariupol, according to the Institute for the Study of War. Russia’s defense ministry said Saturday that some Ukrainian units were pulling back from Severodonetsk, France 24 reported.

Q: What is the city’s symbolic significance?

A: Severodonetsk has been a flash point between Ukraine and Russia before: The city was briefly captured by Russian-backed separatists in 2014.

For Russia, taking the city would provide a much-needed symbolic victory after significant setbacks. It would allow the Kremlin to declare progress toward its goal of “liberating” Donbas, a region where a significant portion of the population speaks Russian as its first language.

Putin has described Russians and Ukrainians as “one people” and sought to undermine the idea of Ukrainian nationhood. He sees Donbas - and Ukraine broadly - as part of “Russky Mir,” or the “Russian World,” and has claimed he intends to “defend” the Russian speakers in the east.

Russian President Vladimir Putin recognized the separatist areas of Donetsk and Luhansk as independent before he invaded Ukraine in February. The United States said last month that Moscow was preparing to annex the regions, along with the southern city of Kherson.

But in areas of Donbas that Kyiv controlled before the February invasion, a majority of the population wanted the separatist regions to return to Ukraine. The war has also spurred many Russian speakers in Ukraine to abandon the language as a way of resisting Russian aggression.

And a Russian victory over Severodonetsk is likely to be Pyrrhic: Its population has largely left, with about 13,000 civilians still sheltering in the city. Oleksandr Stryuk, the Ukrainian mayor, said fighting has destroyed all critical infrastructure - and Ukrainian President Volodymyr Zelensky said this week that 90 percent of Severodonetsk’s houses had sustained damage. Russia will gain a ruined city, with the stench of corpses filling the summer air.