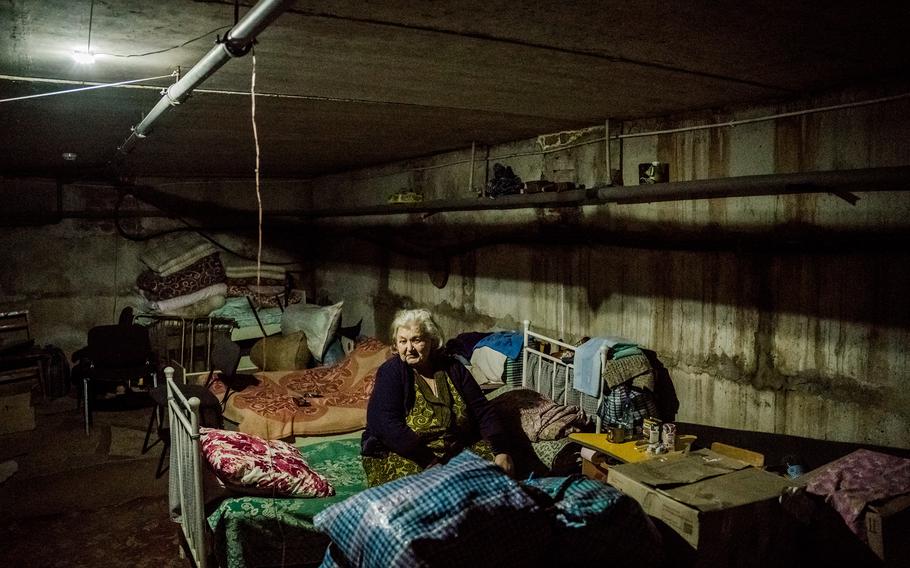 Marfa Ivanovna sits on her bed in a bomb shelter in the village of Kutuzivka on May 22. She sought refuge there in March. (Wojciech Grzedzinski/The Washington Post)

KUTUZIVKA, Ukraine — The day Russian military forces began pouring into Ukraine, residents in this village close to the border hurried into the basement of a municipal building to escape rockets and heavy artillery fire.

"It was constant shelling," said Nadezhda Ryzhkova, 76, a widow who tried to ride out the fighting in her apartment for a few days before fleeing with a neighbor to the municipal building's basement.

Within days, Russian soldiers and separatist fighters from Russian-occupied Donetsk overran the village, which is swaddled in forest less than 15 miles from the border north of Kharkiv. At the edge of the village lie acres and acres of farmland tilled into rich black earth.

As days turned to weeks in the municipal building's basement — and with most villagers either too frightened or too disgusted to speak with the Russian soldiers outside — a single person emerged as their intermediary.

Nadiya Antonova, the council secretary of Vilkhivka, a slightly larger village nearby, took charge, several villagers said. She spoke with Russian soldiers, relayed their instructions and oversaw some of the day-to-day affairs concerning everyone hunkered down in the basement of what had been a kindergarten and a medical clinic.

"We tried to do everything together. We tried to cook together, get firewood and water," said Yuri Lieus, 45, a car mechanic who helped fix the basement to make it more inhabitable. "And everything else was decided by [Nadiya] Antonova." 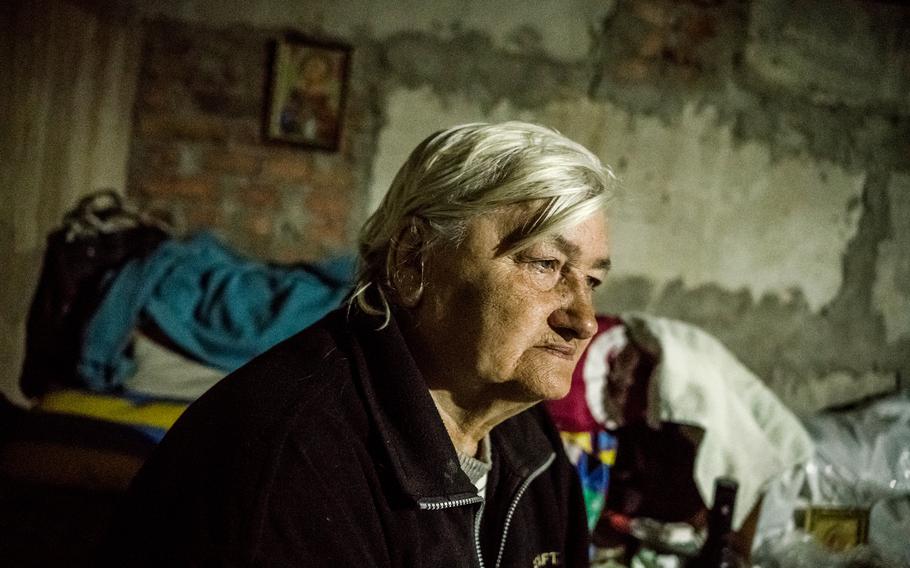 Nadia Alexandrovna came to the basement shelter after first she and then her daughter lost their apartments in bombings. (Wojciech Grzedzinski/The Washington Post) 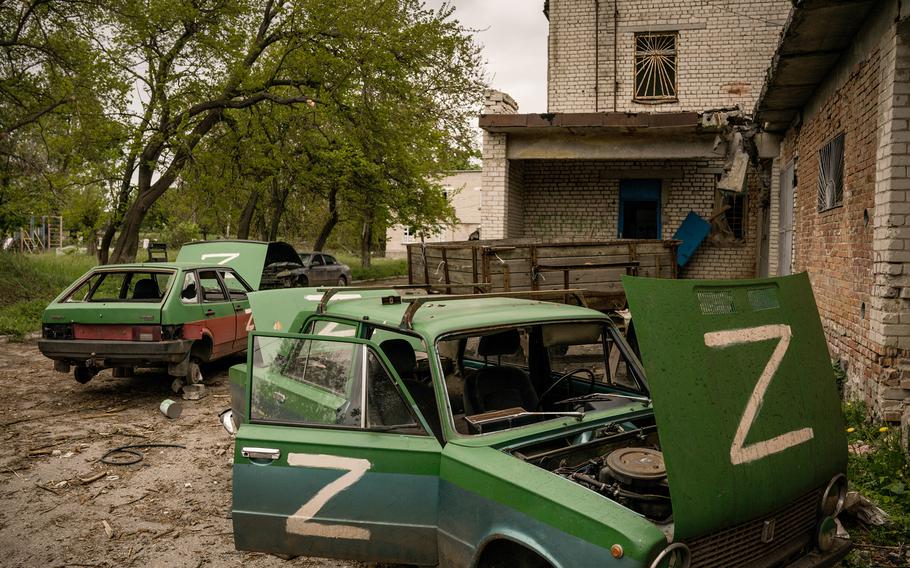 Regional government officials now say Antonova's intercession had a darker side. The Kharkiv Regional Prosecutor's Office, in a statement posted online earlier this month, said Antonova and another regional official are suspected of committing treason.

A spokeswoman for the prosecutor's office declined to comment further while the case was under investigation. If convicted, Antonova could face 15 years to life in prison. Efforts to reach her to determine whether she is represented by an attorney were not successful.

The villagers who lived through at least two months of terror in the municipal building's basement offer a glimpse at the way Ukrainians have often come together to help one another in a time of war. But their story also shows how some may have been helping Russian forces in a country where regions — and sometimes families — have divided loyalties between Moscow and Kyiv.

Before Russian President Vladimir Putin ordered an invasion on Feb. 24, fewer than 1,200 people lived in the village, which boasted a massive farm that supplies Kharkiv with milk and other dairy products.

As Russian forces swarmed toward Kyiv, as many as 170 villagers, including 40 children as young as 3 months old, sheltered in the municipal building's basement until the village was liberated at the end of April, Gen. Valeriy Zaluzhniy, Ukraine's commander in chief, said in a Telegram post.

At first, the basement was icy and damp, with nothing to sit on except tiny chairs taken from the kindergarten's classroom. Beds were brought down from the medical clinic to make people more comfortable. An outhouse around the corner served as a communal privy.

Villagers installed a potbelly stove to warm the room, though the wood smoke had to be vented through a hole knocked through the foundation wall and the basement entrance leading up the stairs to the building's front door.

They also worked together to reinforce a corner of the foundation that had partially crumbled after a glancing blow from a Russian shell. They used steel rebar and bits of metal fencing to shore up the wall but still feared that the foundation might collapse.

As Ukrainian forces battled to take back the village, another artillery round struck, this time on the municipal building's roof, sending a shudder throughout the structure.

"It's not stable even now," Lieus said, viewing the damage with a flashlight.

Meanwhile, the Russian occupation followed a familiar pattern. Soldiers commandeered municipal buildings and people's homes, using them as living quarters or firing positions and often trashing them before departing. They rounded up villagers for head counts, warned them to shut off their phones and imposed a nighttime curfew from 6 p.m. to 7 a.m. And they ordered everyone to wear a white armband, like the ones worn by Russian military forces.

"We tried not to talk to them," Lieus said, holding his hand over his heart. "We were afraid."

But the villagers were otherwise free to come and go at their own risk, except during curfew. Ryzhkova went back and forth between the basement and her apartment until someone told her, only half joking, that if she went out again risking her life, she might not be let back in.

"I only went home to my four babies — my cats — to feed them," she said through an interpreter. "They waited for me at the window, and when they saw me coming their ears pricked up." 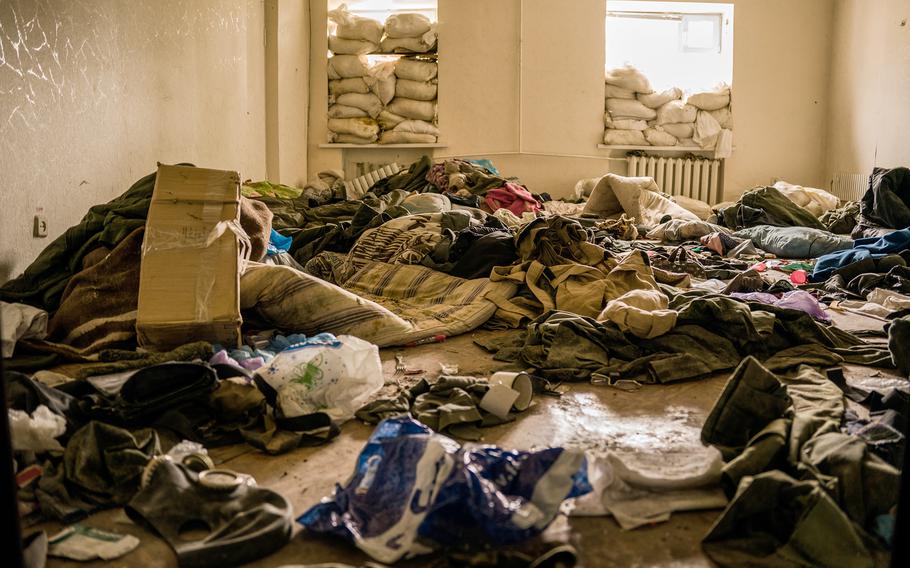 Inside a building used by Russian forces in Kutuzivka. (Wojciech Grzedzinski/The Washington Post) A woman cries while being evacuated from Kutuzivka. (Wojciech Grzedzinski/The Washington Post) 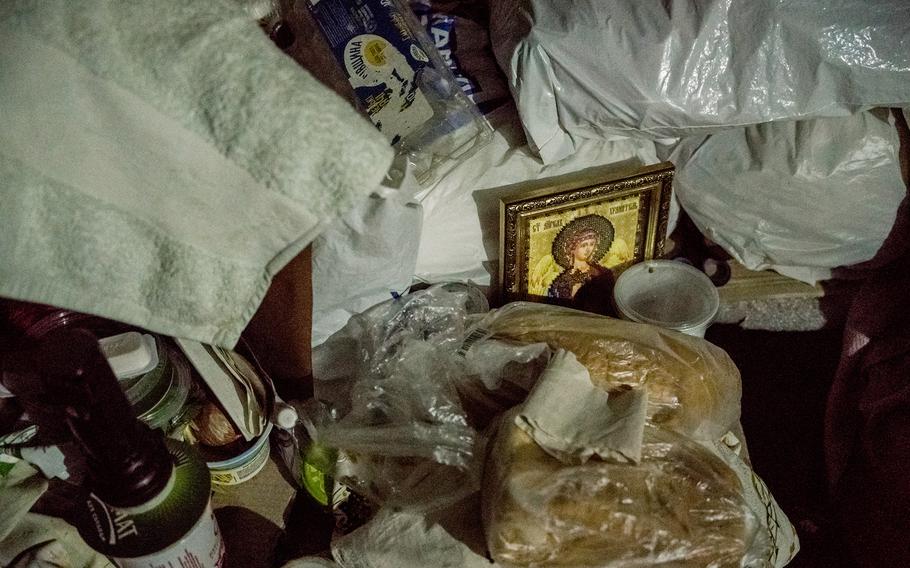 When Ukrainian forces battled their way back in, Russian forces broke and ran. They shed uniforms and donned civilian clothes, sometimes dropping ammunition magazines on the ground in their haste to flee, Lieus said. They left several civilian cars marked with "Z's," the letter that Russia has used to brand its forces in the war, and they left destruction.

One of the village's longest streets, School Street, winding past homes and a small beer and kvass stand, was cratered from bombs and littered with shrapnel. Heaps of glass ringed the school itself. The spent casing of a rocket found near the school carried a blunt message: "For Ogoltsa" — words of revenge and a name scrawled by the soldier who fired it on behalf of a fallen comrade. At the other end of the village lay the body of a Russian soldier, face down in the grass where he fell.

"They left nothing but ruins around here — ruins," said Nadezhda Boiko, 81, as the thump of outgoing Ukrainian artillery fire mixed with the thunder of Russian artillery far off toward the border. "Every house has been flattened, shelled or burned to the ground."

Periodic shelling also threatened the road that runs past the village from Kharkiv's outskirts to Stary Saltiv, closer to the front lines. Military vehicles, including civilian vehicles filled with soldiers, sped along the rough two-lane stretch of road that was already littered with the charred and rusted wreckage of a column that was destroyed in the early days of the war. On Saturday, the area was shelled again, Ukrainian military officials reported.

By the third week of May, Ukrainian forces had retaken 24 villages, including Kutuzivka. Yet even with Ukrainian forces in control, at least a dozen villagers continued to shelter in the municipal building's basement, with many wondering what would come next — and whether the allegations of treachery against Antonova were true.

Oleh Synegubov, the Kharkiv region's governor, said Antonova collaborated with a commanding Russian officer, whose call sign was "Knight," and helped identify Ukrainian military veterans and law enforcement officers in the village. She also pointed out the homes with hunting rifles or other firearms and carried out the Russians' order for everyone to wear a white armband, Synegubov said in a Telegram posting.

"None of those who volunteered to cooperate with the occupiers will escape punishment," Synegubov wrote. "Neither the law nor the Ukrainian people will forgive traitors!"

Serhii Korolchuk contributed to this report.