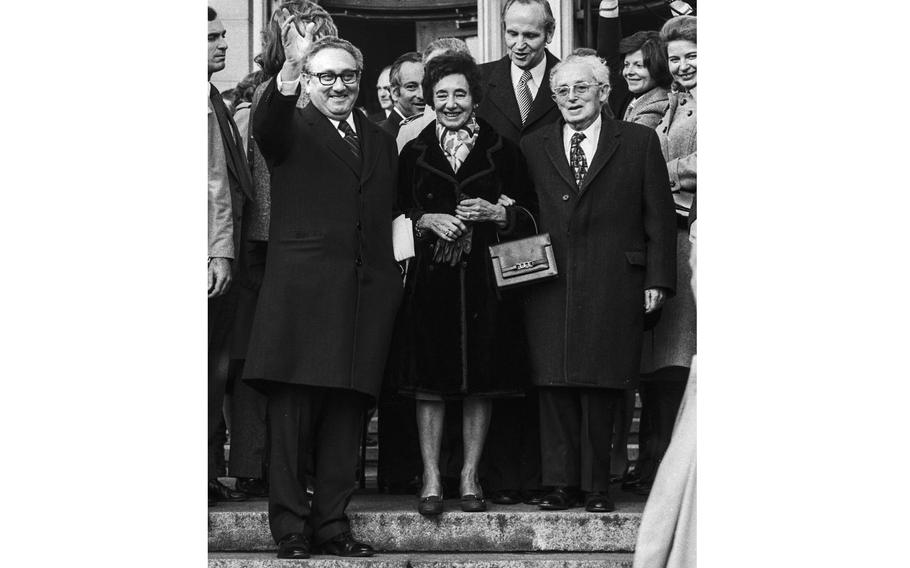 With his parents at his side, Henry Kissinger waves to the crowd gathered in his hometown for a ceremony at which he was presented with Fürth’s Golden Citizen’s Medallion in Furth, Germany, in December 1975. The Kissingers fled Fürth for the U.S. in 1938, but the then-secretary of state noted in his acceptance speech that “I believe that my visit here exemplifies the extraordinary rebirth of friendship between the American people and the German people.” (Gus Schuettler/Stars and Stripes)

Former U.S. Secretary of State Henry Kissinger said Monday that Ukraine should concede territory to Russia to help end the invasion, suggesting a position that a vast majority of Ukrainians are against as the war enters its fourth month.

Speaking at a conference at the World Economic Forum in Davos, Switzerland, Kissinger urged the United States and the West to not seek an embarrassing defeat for Russia in Ukraine, warning it could worsen Europe’s long-term stability.

After saying that Western countries should remember Russia’s importance to Europe and not get swept up “in the mood of the moment,” Kissinger also pushed for the West to force Ukraine into accepting negotiations with a “status quo ante,” which means the previous state of affairs.

“Negotiations need to begin in the next two months before it creates upheavals and tensions that will not be easily overcome. Ideally, the dividing line should be a return to the status quo ante,” said Kissinger, 98, according to the Daily Telegraph. “Pursuing the war beyond that point would not be about the freedom of Ukraine, but a new war against Russia itself.”

The “status quo ante” mentioned by Kissinger, who was secretary of state to Presidents Richard Nixon and Gerald Ford, refers to restoring a situation in which Russia formally controlled Crimea and informally controlled Ukraine’s two easternmost regions of Luhansk and Donetsk. Ukrainian President Volodymyr Zelenskyy has emphasized that part of his conditions for entering peace talks with Russia would include a restoration of preinvasion borders.

Kissinger’s comments come as world leaders say Russia’s war in Ukraine has thrown the “whole international order into question.” European Commission President Ursula von der Leyen told global leaders in Davos that the war is not only “a matter of Ukraine’s survival” or “an issue of European security” but also “a task for the entire global community.” She lamented Russian President Vladimir Putin’s “destructive fury” but said Russia could one day recover its place in Europe if it “finds its way back to democracy, the rule of law and respect for the international rules-based order ... because Russia is our neighbor.”

Much of Ukraine agrees with Zelenskyy on not giving up land in exchange for peace. A poll conducted by the Kyiv International Institute of Sociology this month found that 82% of Ukrainians are not prepared to give up any of Ukraine’s land, even if it means the war will drag on. Only 10% believe that giving up land is worth it to end the invasion, while 8% were undecided, according to the poll conducted between May 13 and last Wednesday.

The sample did not include residents of territories that were not controlled by the Ukrainian authorities before Feb. 24 — such as Crimea, Sevastopol and some districts of the Donetsk and Luhansk regions. The survey also did not include citizens who went abroad after Feb. 24.

Kissinger’s comments follow a recent editorial from the New York Times’s editorial board that argued Ukraine would have to make “painful territorial decisions” to achieve peace.

“In the end, it is the Ukrainians who must make the hard decisions: They are the ones fighting, dying and losing their homes to Russian aggression, and it is they who must decide what an end to the war might look like,” the Times editorial board wrote Thursday. “If the conflict does lead to real negotiations, it will be Ukrainian leaders who will have to make the painful territorial decisions that any compromise will demand.”

The editorial was met with backlash, including from Zelenskyy adviser Mikhailo Podolyak, who said that “any concession to Russia is not a path to peace, but a war postponed for several years.”

In his comments Monday, Kissinger, a longtime advocate of a realpolitik approach that has nations putting their practical aims in front of morals and principles, urged European leaders to not lose sight of Russia’s place in Europe and risk the country forming a permanent alliance with China.

“I hope the Ukrainians will match the heroism they have shown with wisdom,” he said, according to the Daily Telegraph.

Critics described Kissinger’s comments as what one called “an unfortunate intervention.” Inna Sovsun, a member of the Ukrainian parliament, denounced Kissinger’s position as “truly shameful!”

“It’s a pity that the former U.S. Secretary of State believes that giving up on part of the sovereign territory is a way to peace for any country!” Sovsun tweeted.

Podolyak returned to his refrain that Ukraine could not concede territory, even if it leads to peace, saying the country “does not trade its sovereignty for someone to fill their wallet.” He tweeted out an old photo of Kissinger shaking hands with Putin on Tuesday, with Podolyak saying he was thankful that Ukrainians fighting the war did not listen to the diplomat’s suggestion.

“As easily as Mr. #Kissinger proposes to give [Russia] part of [Ukraine] to stop the war, he would allow to take Poland or Lithuania away,” Podolyak said. “It’s good that Ukrainians in the trenches do not have time for listening to ‘Davos panickers.’ They’re a little bit busy defending Freedom and Democracy.”

The Washington Post’s Adela Suliman contributed to this report.