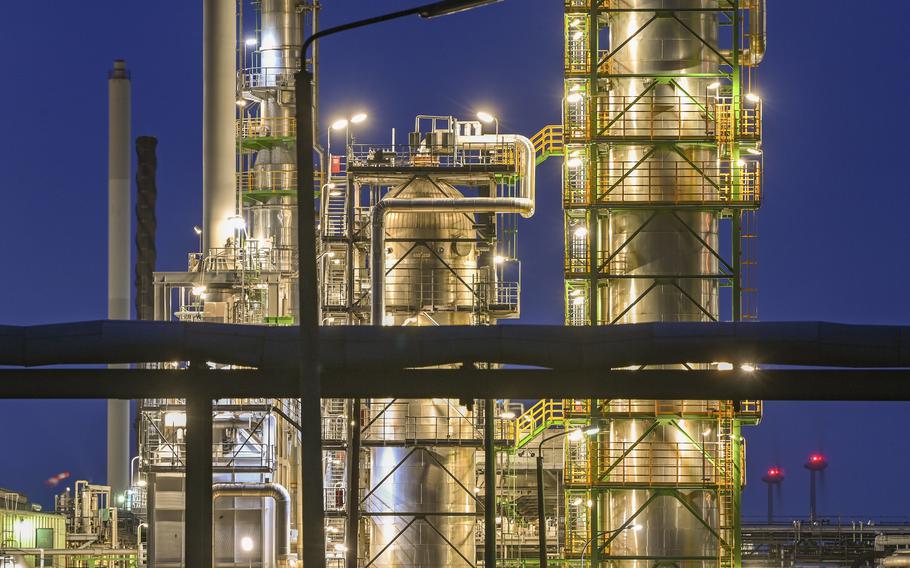 The facilities of the oil refinery on the industrial site of PCK-Raffinerie GmbH are illuminated in the evening in Schwedt, Germany, Wednesday, May 4, 2022. Crude oil from Russia arrives at the oil refinery via the “Friendship” pipeline. The Russian energy company Rosneft took over a large part of the refinery last year. Rosneft is Russia’s largest oil producer. According to its own information, the plant in the Uckermark region processes 12 million tons of crude oil annually, making it one of the largest processing sites in Germany. (Patrick Pleul/AP)

BERLIN - Former German chancellor Gerhard Schröder on Friday resigned from his position as chairman of Russian state energy giant Rosneft amid growing calls in Europe for him to face sanctions unless he gives up his income from Russia.

Rosneft said Schröder had informed the company that it was “impossible” to continue in the role. The former chancellor - who took up his $600,000-a-year position at Rosneft in 2017 - had been “invaluable” in implementing large-scale infrastructure projects in Russia and Germany, the company said in a statement.

He still holds board positions with Nord Stream 2 - which built the controversial, now-shelved gas pipeline between Russia and Germany - as well as its parent company.

Germany’s chancellor from 1998 to 2005, Schröder is a longtime ally of Russian President Vladimir Putin and a member of current chancellor Olaf Scholz’s ruling Social Democrats. The 78-year-old politician was instrumental in deepening Germany’s energy dependency on Moscow - a relationship Berlin is now scrambling to untangle. And Schröder has become an increasing embarrassment to his party and much of the country as Russia has waged its new offensive in Ukraine.

In February, as Moscow amassed its troops on the country’s border, he stirred outrage by criticizing Ukraine for “saber-rattling.” Since the war began, he has refrained from distancing himself from the Kremlin.

His decision to resign from Rosneft came a day after the European Parliament endorsed a nonbinding resolution urging the European Union to extend sanctions to “the European members of the boards of major Russian companies and to politicians who continue to receive Russian money.”

German lawmakers also approved a move that stripped him of the taxpayer-funded office and staff granted to him as a former chancellor. The changes, proposed by lawmakers in the ruling coalition, did not explicitly name Schröder but linked those expenses to official duties, making his office redundant. He is still entitled to his security detail and pension, which according to German press reports amounts to more than $100,000 a year.

Schröder is having the decision legally reviewed, according to Der Spiegel magazine. The former chancellor’s office did not immediately respond to a request for comment.

Scholz described the decision to stop funding to Schröder’s office as “logical” but has said sanctions against his predecessor were unnecessary. Scholz had called on him to resign his board positions.

Markus Ferber, one of the lawmakers who drafted the European Parliament’s resolution, told Reuters that holding a senior position at a major state-controlled company means Schröder is “de facto closely cooperating with Russia.”

The intervention was also intended to dissuade Schröder from taking a board position at Gazprom, another key Russian energy company, according to Ferber. Gazprom in February announced that Schröder had been nominated to its board, with a decision expected at its annual shareholder meeting on June 30.

It was just the latest announcement in a decades-long relationship with Russian energy, set in motion when Schröder used his last days in office in 2005 to cement Germany’s gas ties with Moscow. Then - facing an election he looked sure to lose - he left the campaign trail to sign a letter of intent with Putin to build Nord Stream 1, the first Baltic gas pipeline between Germany and Russia. He became head of Nord Stream’s board of shareholders three weeks after he left office.

Schröder was also key in facilitating the Nord Stream 2 deal, a natural gas pipeline that cost $11 billion and connects Russian fields directly to Germany. The notion of increasing reliance on Russian energy was controversial in Europe, and the project was a sore point between Berlin and Washington until Scholz halted certification two days before the war in Ukraine began.

Public outrage directed at the former chancellor has only increased since Russia’s invasion.

In a recent interview with the New York Times, Schröder called Putin’s war a mistake but stopped short of condemning Russia’s killing of civilians in Bucha, Ukraine. The incident “has to be investigated,” he said.

He declined to disavow his friendship with Putin and said he did not think that the bloodshed carried out in Bucha was ordered by the Russian leader.

Cheng reported from Seoul. The Washington Post’s Mary Ilyushina in Riga, Latvia, contributed to this report.