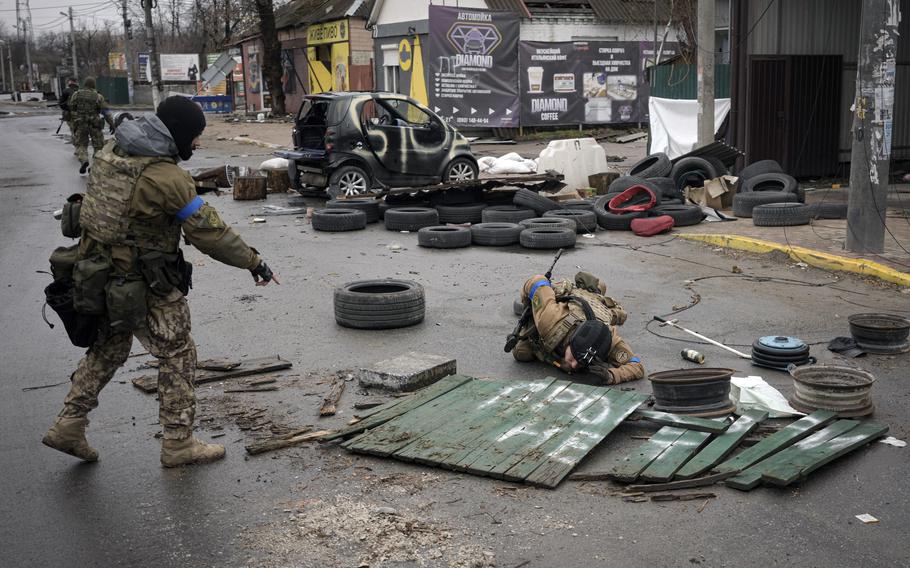 Ukrainian officials are seeking a prisoner swap to return fighters who left the city of Mariupol toward territory in Russian hands under a negotiated surrender. But some Russian officials are now signaling a swap may not be guaranteed.

Russia said nearly 1,000 Ukrainian fighters had exited the embattled Azovstal steel plant, their last holdout in the southern port city. The Washington Post could not immediately verify the claim.

At least 260 fighters, many seriously wounded and lying on stretchers, ended their weeks-long defense of the besieged facility on Monday as Kyiv announced the end of the battle there. Russia’s Defense Ministry said Wednesday that another 694 Ukrainian fighters left the plant over the last day.

While Ukraine said delicate evacuation talks were ongoing, uncertainty loomed over the fate of fighters who have emerged from the plant’s underground network, after Ukrainian Deputy Prime Minister Iryna Vereshchuk indicated they would be exchanged for Russian prisoners of war once “their condition stabilizes.”

It’s unclear how many remain in the Azovstal plant, which provided shelter for Ukrainian forces including from the far-right Azov Regiment, along with civilians who were rescued in an earlier agreement. Ukrainian authorities have previously said that nearly 1,000 fighters were holed up inside.

On Wednesday, a separatist leader in eastern Ukraine, whose forces are fighting alongside Moscow, said a court should decide the fate of fighters who lay down their arms, including “those who appear to be nationalists,” according to a local news agency in the breakaway region. He told reporters there were plans to demolish the battered steel plant.

Denis Pushilin, head of the self-proclaimed Donetsk People’s Republic, also said the highest-level Ukrainian commanders had not left the Azovstal holdout yet.

His comments came after a pushback from some Russian officials on the possibility of a swap. In Moscow, the speaker of the Russian State Duma, or lower house, Vyacheslav Volodin, said Tuesday that Ukrainian “Nazi criminals” should not be a part of an exchange, while a lawmaker proposed banning a swap. Russian investigators said they would interrogate the Ukrainian troops for alleged crimes. And Russian news agencies said the prosecutor general asked the country’s top court to designate the Azov Regiment as a terrorist group.

Kremlin spokesman Dmitry Peskov said Tuesday that Russian President Vladimir Putin guaranteed the treatment of the Mariupol fighters would be “consistent with the respective international laws.”

Yet there has been no definitive word on the possibility of a swap from Russia’s top leadership.

After a barrage that pummeled the city, the Kremlin has described the exit of the fighters from Mariupol as a victory. People who made it out of the plant recounted surviving the siege in a fetid bunker without sunlight, as food and water supplies dwindled.

Russia advanced into most of Mariupol over weeks. The city, on the Sea of Azov, helps secure a strategic land bridge from the Russian border to Crimea, the Black Sea peninsula it annexed in 2014.

Ukrainian officials have credited the Mariupol fighters and their desperate last stand with tying up Russian forces in battle for weeks, preventing advances elsewhere.

Some pro-Russian social media users denounced the deal for their evacuation as handing Kyiv a propaganda victory or called for the deaths of the fighters. When the Kremlin cast the war on Ukraine as a quest to “de-Nazify” the country, seeking to delegitimize the Ukrainian government as fascist, it was referring in part to the nationalist Azov Regiment.

Before the evacuation, Moscow may have created expectations that Russian forces would destroy the outgunned Ukrainian forces in Mariupol, according to analysts at the Institute for the Study of War, a Washington-based think tank. “Some Russians may find it difficult to reconcile the triumphant messaging with the abrupt negotiations leading to a negotiated surrender,” it wrote in a daily assessment.

The Washington Post’s Annabelle Chapman and Amar Nadhir contributed to this report.