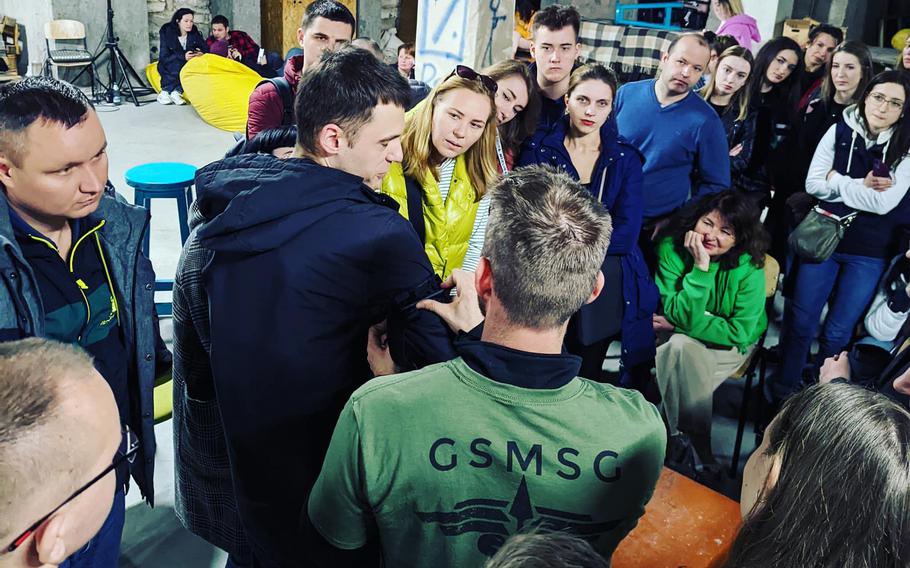 Members of Global Surgical Medical Support Group are seen in an underground bunker during an air raid alert in Ukraine as they train Ukrainians how to treat combat injuries. ( GSMSG/ Facebook)

(Tribune News Service) — Dr. Aaron Epstein, just back from Ukraine, pulled up a video on his phone, shot during his recent mission there.

He and his team of doctors had just wrapped up a day training Ukrainian fighters and civilians in combat care when a Russian missile hit about 1,000 feet away from where they stood.

In the video, a shock wave rattles a fence, a streak cuts the sky ahead, a plume of smoke rises and a car alarm sounds.

Such are the risks when you run a group that rushes medical aid and training to conflict zones. And for that work, Epstein, a University at Buffalo surgery resident, will be recognized this summer when he receives the civilian equivalent of the Congressional Medal of Honor.

He says it’s been worth juggling his medical training with his humanitarian mission, even though it has already delayed his five-year residency by a year so far.

Since Russia invaded Ukraine on Feb. 24, Epstein has been splitting his life between surgical shifts in Buffalo and the humanitarian aid group he founded in 2015. His Global Surgical Medical Support Group has a network of 1,500 medical experts who bring care and training to crisis zones and disaster areas around the world.

He recently returned from a monthlong mission leading a team of doctors and surgeons who trained thousands of Ukrainians in procedures ranging from basic combat care like applying a tourniquet to a severed limb to ligating a vein or artery to stop hemorrhaging.

The work earned him the 2022 Citizen Honors Award, America’s second-highest civilian honor, to be presented by the Congressional Medal of Honor Society in July.

Epstein says he’ll try to make it back from his next Ukraine mission to attend the July 20 ceremony in Charleston, S.C. But he really doesn’t care about winning awards. He wants to win “hearts and minds.”

That U.S. military motto for the War on Terror defines why he decided to become a doctor. His first career was national security, a field that put him in the Middle East during the Arab Spring uprisings in 2010-2012.

“I was in Lebanon watching the Arab Spring unfold and seeing decades of national security efforts to shape the region go up in smoke,” Epstein said. “And I was thinking, ‘What was the point?’ You can poke and prod and do all the national security stuff you want, and it doesn’t seem to have a lasting impact.”

“But what I did see was when American medical personnel treated someone’s kid or their mother or grandmother — that’s when you have a real, solid impact. The Army is always talking about winning hearts and minds,” he said. “But the only time I saw that happen was when we showed we cared for someone.”

Epstein, a wiry, youthful 36-year-old, originally chose national security because of 9/11. He was 15 and flying from his Florida home to a New England prep school that day, when his plane suddenly landed in New Jersey. His parents rented a car and drove past the thick clouds of smoke over New York City on the way to Phillips Exeter Academy.

It was Epstein’s first experience of seeing a wrong and vowing to do something about it. He decided his future would involve protecting the U.S and its allies from terrorist attacks.

He got a bachelor’s degree in international policy and economics from Rice University in Texas in 2008, then earned a master’s in intelligence and security at Georgetown University in 2012. Along the way, several U.S. State Department internships took him across the globe, including a fellowship at Beirut University in 2011.

But his work in defense showed him other problems. Besides his “hearts and minds” revelation, he also saw shortcomings with medical aid groups that often had few doctors in combat zones.

Epstein saw a solution. He could use his national security knowhow and connections to create “a security cocoon” in war zones, allowing teams of physicians and surgeons to treat casualties close by.

He also realized he wanted to be one of those doctors.

He came home and volunteered as a fire department medic while applying to medical schools.

At home on break his first year at Georgetown’s medical school, he decided to launch his aid group. “I just got online and went to one of those do-it-yourself legal websites and literally went step by step in how to form a 501c3 nonprofit. I spent a couple days just ripping out all these forms and PDFs, setting up a bank account and getting a business P.O. Box,” he said.

He chose the name Global Surgical Medical Support Group partly because its acronym, GSMSG, is a palindrome.

“At the time, I never thought this would turn into anything big,” he said. “I picked the smallest, most insignificant category of 501c3. And the funny thing is now that is biting me in the (butt) because we are so large that our funding is getting to the point where I’ll have to refile all over again.”

The group’s pilot missions brought Georgetown physicians and surgeons to Iraq during the war against ISIS in 2015-16. His security, military and Iraqi militia connections provided a “security blanket” on the ground and the United Nations, World Health Organization and U.S. Agency for International Development all had funding for medical encampments but lacked staff.

“We started putting our people into those camps and it was like, ‘This is what a fully functioning medical encampment is supposed to be,’ “ he said. “We had an entire refugee camp of 5,000 families lining up to be seen by our physicians, and from there it took off. It was like, ‘Wow, this works!’ “

In 2016, a GSMSG team’s proximity to the fighting saved the life of a U.S. Special Operations Forces member who was “critically injured and would have bled out” if forced to wait for a helicopter to bring him to the nearest military aid, he wrote in a 2017 article about the group.

Epstein has since led a dozen missions to Iraq to assist in the conflict with ISIS, proving that the model of placing large, efficient teams of civilian doctors downrange from combat areas is far more effective than relying on small mobile military units on the battlefield.

As his group’s reputation has spread, so has its reach. On Monday, USAID is flying him to Honduras to train military and civilian teams fighting drug cartels in a nation with one of the world’s highest homicide rates. A few weeks later, he’ll head back to Ukraine.

Fortunately, UB has accommodated his aid work. When applying for residencies in 2017, Epstein chose UB because its chair of surgery, Dr. Steven Schwaitsberg, recruited him for his achievements as a humanitarian and a doctor. While other schools told him why he’d be lucky to train there, Schwaitsberg told him why UB would be lucky to have him.

He was in the middle of his fourth year of residency when Russian troops began massing on the Ukraine border in December. He saw what was coming, prepared teams to deploy to Ukraine and reached out to offer GSMSG’s help. Then the call came. “We had teams on the ground training people in combat casualty care within days,” he said.

So far, his rotating teams of 10 to 20 civilian doctors and nurses have trained more than 5,000 Ukrainian civilians and over 1,000 soldiers, with as many as 200 people attending some sessions. He said the casualties they’ve seen include “blown off limbs and bullet wounds,” injuries they can treat and train others to handle.

What they haven’t seen before are the military atrocities committed on civilians, Epstein said. “The most dramatically awful things we’ve seen are areas that Russian troops occupied with instructions to vacate the population, either by escorting them out or executing them,” he said.

“We saw children who had been burned alive and women with cigarette burns on their faces who had been raped before they were executed,” he said. “These will be considered war crimes.”

The horrors are further fueling Ukraine’s determination to prevail, Epstein said, and he sees every indication it will succeed. Russia’s supposedly formidable military might has turned out to be “more of a testament to their ability to deceive,” he said. “Their equipment is garbage that falls apart on the battlefield, compared to the new equipment being supplied to Ukraine by every Western nation.”

Even more important, “Ukrainians are literally fighting for their lives and their homeland, and their morale could not be higher, whereas the Russians’ morale could not be lower,” he said. “If you lack morale and equipment, you don’t have much to fight with. I would be surprised if Russia doesn’t come out of this a failed state.”

Back in the U.S. for a few weeks, Epstein has spoken about the war at UB and D’Youville University, as well as in a video interview with the American College of Surgeons, which awarded him the 2020 ACS/Pfizer Resident Volunteerism Award for his aid work.

As the conflict rages, Epstein said the group has enough personnel — 90% of them former military with prior experience in war zones, which can make or break a team when missiles start falling. They also have plenty of medical equipment provided by Western nations and aid groups.

But they rely on donations to support their missions.

That’s the one reason he’s happy about getting the Citizen Honor award, he said. If it helps him generate support for the work, it will be worth traveling two days each way from his next stint in Ukraine to pick it up in person.

And if Epstein does make it, he doesn’t expect friends and family to be there.

“At this point my parents are like, ‘Please just finish your residency,’ “ he joked.