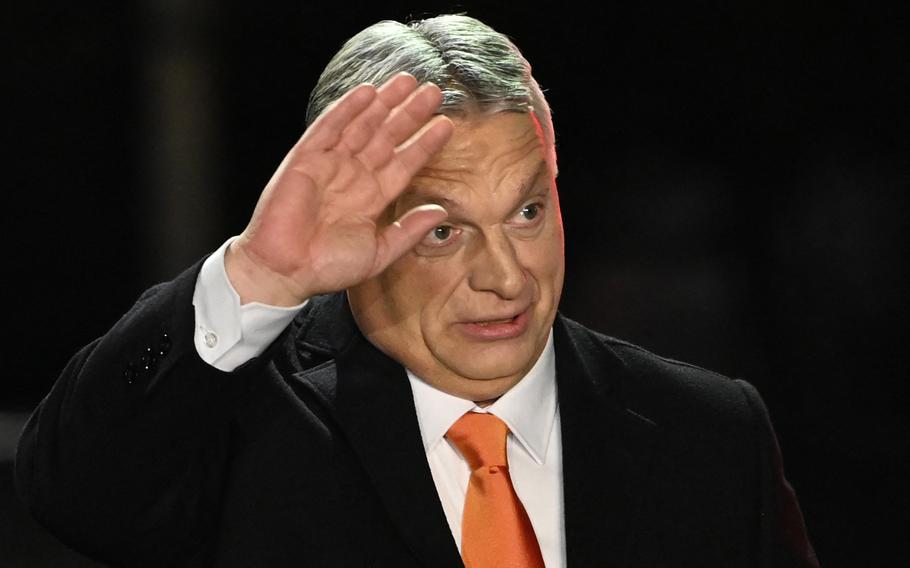 Hungarian Prime Minister Viktor Orban celebrates on stage with members of the Fidesz party at their election base, “Balna” building on the bank of the Danube River of Budapest, on April 3, 2022. (Attila Kisbenedek/AFP/Getty Images/TNS)

Hungarian Prime Minister Viktor Orban appeared to quash the prospect pivoting away from Moscow following his landslide election victory last month by naming two allies with ties to Russia to top posts in his next government.

Szijjarto, an Orban confidante, received the Order of Friendship award last year in Moscow from Russian Foreign Minister Sergei Lavrov, who is now under European Union sanctions. Szalay-Bobrovniczky has a stake in a joint venture with the biggest Russian producer of rail cars in a town north of Budapest.

With Orban’s government refusing to help western efforts to arm Kyiv’s troops and blocking EU proposals to ban Russian oil, the selections effectively end speculation that he would follow his fourth consecutive election win with a shift away from Moscow.

“The new cabinet lineup shows that the Russian thread is going to get even stronger for Orban,” said Daniel Hegedus, a fellow at the German Marshall Fund in Berlin.

Orban will take the oath of office on Monday, while the rest of his cabinet is expected to win parliamentary approval in the coming weeks.

His current clashes with the EU over Ukraine follow years of dust-ups over the rule of law, with the bloc accusing him of undermining its democratic values. Kyiv has also been severely critical of Orban, who has sealed energy deals with Russia, including for natural gas contracts and the expansion of a nuclear power plant.

Still, while the Hungarian leader has irked his partners in the EU and NATO over his relationship with Moscow, he has marked his tenure as the EU’s current longest-serving head of government with acts of pragmatism and keeping his options open.

In that vein, he selected Tibor Navracsics, a former EU Commissioner and critic of Orban’s eastern drift, as minister in charge of EU funds. His role may include convincing the European Commission to unlock billions of euros in aid that’s being held up on graft and rule of law concerns.

“Navracsics’s selection is a gesture of sorts and suggests Orban’s peacock dance between east and west is set to continue,” Hegedus said.

Other appointments confirm Orban is sticking to a tried-and-true team that has helped him consolidate power over Hungary’s courts, media, education and culture on an unprecedented scale since he returned to power in 2010.

His chief of staff, Antal Rogan, will gain oversight of the national security service, while Marton Nagy, a former deputy central bank governor and Orban economic adviser, will become minister in charge of economic development. Mihaly Varga will stay on as finance minister.