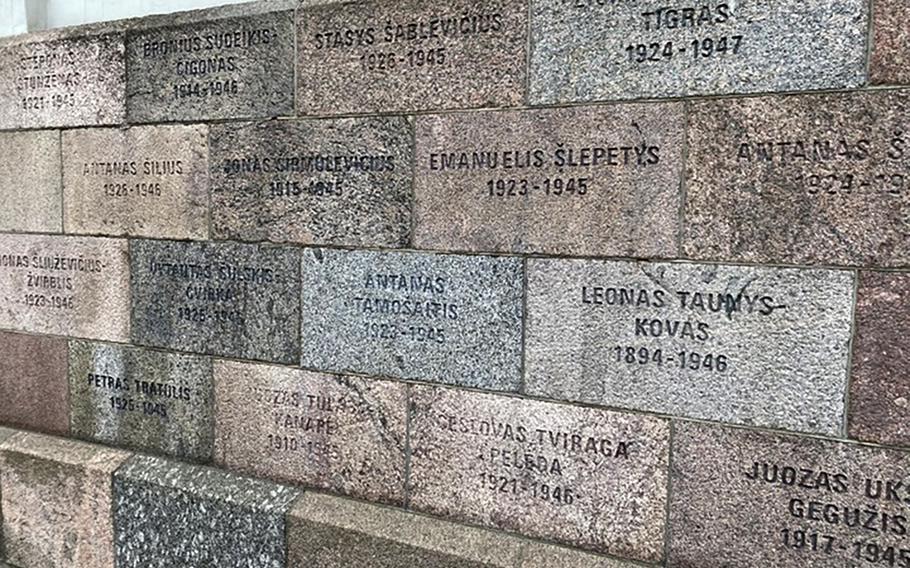 A memorial wall outside the KGB prison museum features the names of people who were tortured and killed inside. (Jeanne Whalen/Washington Post)

VILNIUS, Lithuania - The Energy Ministry in this Baltic nation is located across a small street from a former KGB prison, where, during decades of Soviet rule, Lithuanian dissenters were interrogated, tortured and killed.

A museum in part of the building tells the story of those years, showing the dank cells and bullet-riddled execution chamber that the Soviets used to crush resistance during and after World War II.

From his office overlooking the former prison, Energy Minister Dainius Kreivys says this history is the fuel that propelled Lithuania, an independent nation since the 1991 Soviet collapse, to spend years working to break free of Russian oil and gas.

“During all of our history, we had to fight for our independence, for our survival,” Kreivys said in a recent interview. “In Lithuania, we say that energy is the second pillar, next to the military, of our national security.”

That’s meant a years-long construction spree to build oil and gas import terminals, pipelines and other infrastructure to prepare the country to live without energy from the continent’s biggest supplier, Russia.

While Germany was helping build two undersea pipelines to dramatically increase its imports of Russian natural gas, Lithuania was spending its taxpayer money with the single-minded goal of breaking free. The effort paid off last month, when the nation of 2.8 million was able to halt its remaining gas purchases from Russia to protest the invasion of Ukraine. It broke its reliance on Russian oil years ago.

Long-simmering hostility toward Moscow and its historical subjugation of Eastern Europe is the propellant that has driven the continent’s most successful energy-independence movements. Fellow Baltic states Estonia and Latvia, as well as Poland, are years ahead of other European Union nations in rejecting Russian oil and gas.

Some say they tried to warn Germany over the years as it deepened its dependence on Moscow through the Nord Stream 1 and 2 pipelines from Russia.

“Germany was claiming that this project is fully an economic one, [that] it has nothing to do with politics, and they could see no issue [with] the independence of Germany and the whole of Europe,” Anna Moskwa, Poland’s minister of climate and environment, said in an interview in Warsaw. “For us it was an issue, taking into account the history we had, the whole of Europe has.”

Poland’s efforts are now putting it in a position to help Germany as it races to kick its Russian habit. In talks in Warsaw last month, the countries discussed ways that Germany could use Poland’s oil infrastructure to break its remaining dependence on Russian supplies.

Lithuania has a long, bitter history of Russian occupation, starting with Catherine the Great’s forces in 1795. The nation regained its independence after World War I, but external domination returned during World War II, when Germany briefly occupied the country and enlisted Lithuanian collaborators to help slaughter most of the country’s Jewish population. Lithuania then fell to the Soviet Union, which forcibly incorporated it as a Soviet republic in 1944.

Thousands of guerrilla fighters continued resisting Soviet rule in the postwar years, a movement eventually crushed through torture, execution and mass deportations to Siberia. In the basement execution chamber at the KGB museum, the discarded eyeglasses and shoes of some of these partisans are displayed on the floor next to a wall pockmarked with bullet holes.

Lithuania felt a different kind of pressure after it became the first Soviet republic to declare independence, in March 1990. By that time, Moscow had built a web of pipelines and refineries to deliver heavily subsidized oil and gas from Siberia to Eastern Europe, and it leveraged that network to punish its recalcitrant republic.

In April 1990, Moscow sharply cut oil and gas deliveries to Lithuania for more than two months, causing a spike in gasoline prices and the shuttering of many factories.

Lithuania desperately sought supplies from Norway and others, but it didn’t have the money to pay or the power to steer foreign tankers around the Soviet navy. It was an early lesson that if Lithuania wanted to have sovereignty in its decisions, it needed to buy energy elsewhere, Kreivys said.

As a first step after its independence, it hired an American firm to build a new oil import terminal that was completed in 1999. Buying oil that way was more expensive but freed Lithuania from relying on Russian pipelines.

The risk of such dependence was underscored later that same year, when Lithuania sold a stake in its Soviet-era refinery to an American bidder instead of a Russian rival, prompting Russia to impose a sporadic oil blockade on the facility through a pipeline the Soviets had named Friendship.

Energy pressure worsened after Vladimir Putin came to power in 2000, and after Lithuania joined the European Union and NATO in 2004. Russia started charging Lithuania significantly more for natural gas than it did other European customers. And after Lithuania chose a Polish buyer over a Russian suitor when its refinery came up for sale again, it once more found Russia shutting down shipments of crude.

That spurred Lithuania to accelerate its efforts to break free, drawing up plans for a new terminal to import liquefied natural gas (LNG) via Baltic Sea shipments.

When Putin warned against proceeding with the gas project, in a rare 2010 meeting with Lithuania’s then-president, Dalia Grybauskaite, he only motivated Vilnius to move faster, said Romas Svedas, who was vice minister of energy at the time.

Grybauskaite “is a very strong personality, and immediately she said, ‘No, we are going to develop alternatives,’” Svedas said in an interview.

“We’ve been forced to build an extensive LNG terminal even though our neighbor is the richest country in the world for natural gas,” he said. “It’s a paradox but basically Putin pushed, as he is pushing the whole world, to make a choice for democratic values.”

The LNG plan still met resistance in Lithuania’s Parliament, where some legislators questioned the wisdom of building such an expensive project in a small country. Kreivys and Svedas blamed Russian disinformation for the obstruction, which was eventually overcome.

A clutch of anti-shale billboards mysteriously appeared on the main highway out of Vilnius. When local journalists investigated, some of the billboard companies said a private individual had purchased them, but they wouldn’t name the person, Svedas said. No central or local government officials would claim responsibility.

“In Lithuania, normally if you have a position, you make it public. You go to the street and say, no for shale, no for war. It’s OK, we’re a democratic country,” he said.

Despite the odds, the LNG terminal began operating in 2014 and helped lower gas prices for Lithuania, officials say. The country continued buying some gas via pipelines from Russia, which lowered its prices to compete with the LNG supply.

But after Russia invaded Ukraine, Lithuania was the first European country to announce that it would immediately stop buying Russian gas. Latvia and Estonia quickly followed. “Our terminal is supplying them as well,” Kreivys said.

This week, Lithuania and Poland opened a new pipeline connecting the countries and enabling them to share gas - a timely development after Russia abruptly cut gas deliveries to Poland last week.

“Together we say NO to Russian gas, NO to Russian oil, NO to financing the war,” Lithuanian President Gitanas Nauseda tweeted after the opening ceremony Thursday.

Shared electricity is the last remaining link to Russia that Lithuania is racing to cut. It still gets about 10% of its electricity from a network built in Soviet times and controlled by Moscow.

The transmission loop connects all three Baltic states with Belarus and western Russia, creating an interdependence that no one country can break without hurting itself and the others, said Rokas Masiulis, head of Lithuania’s electricity grid.

Still, Vilnius is scrambling to build new electricity links to Poland and the E.U. with the aim of leaving the Soviet-era network.

“By the end of 2025, we’ll be ready to desynchronize from Russia,” Masiulis said.