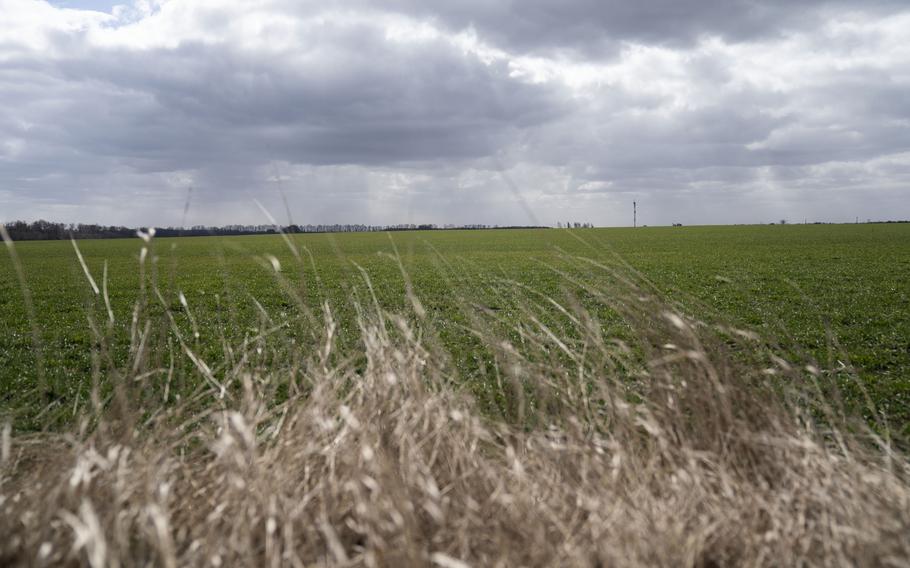 A field of young wheat rises off a country road on March 27, 2022, in Uman, Ukraine. (Michael Robinson Chavez/The Washington Post)

Ukrainian officials say that Russian forces have taken vast stores of grain from Ukraine and exported it to Russia, exacerbating the risk of shortages and hunger in areas under Russian control.

Farmers in Ukrainian territory occupied by Russian forces reported that the Russians were “stealing their grain en masse,” according to a statement released over the weekend by Ukraine’s Ministry of Agrarian Policy and Food.

Agriculture minister Mykola Solskyi said on Ukrainian television last week that he had heard a surge of accounts from elevator operators of Russians seizing grain in recent weeks in occupied areas.

“This is outright robbery,” he said, warning that the behavior could cause a food crisis.

One of the world’s largest grain exporters, Ukraine has seen its grain industry hobbled by Russian attacks and blockades of sea ports that Ukraine relied on to transport food products to countries around the world. Countries in the Middle East and South Asia rely heavily on Ukrainian grain, and the United Nations World Food Program has warned that the war could exacerbate global hunger.

Ukrainian officials say hunger is a growing threat at home, too — and accuse Russia of deliberately seeking to prevent Ukrainians from consuming or selling their agricultural products.

Ukraine had 30 million tons of wheat in storage as of last month. Deputy agriculture minister Taras Vysotskiy said Thursday that Ukraine has enough food stocks in the parts of the country it still controls to feed the population there, Reuters reported. But in Russian-occupied territory, it may be a different story, officials warned.

Two months into its invasion, Russia controls swaths of southern Ukraine — a region that helped the country earn its reputation as the breadbasket of Europe. Vysotskiy said on Ukrainian television this week that the Russians had exported about 441,000 tons of grain from four occupied regions: Zaporizhzhia, Kherson, Donetsk and Luhansk.

Vysotskiy said 1.4 million tons of grain were stored in occupied territory and are needed for daily food needs of Ukrainians who live there.

More than 90% of farmland in Luhansk is concentrated in the northern part of the region, which Russian forces have taken over since February, Serhiy Haidai, the regional governor of Luhansk, said on his Telegram channel. The Russians removed or destroyed a quantity of grain in the region that would have met residents’ needs for three years.

The Washington Post could not verify the accuracy of the claims. The U.N. World Food Program said it was was unaware of any grain seizures and exports by Russian forces in occupied areas of Ukraine.

The Kremlin denied Ukraine’s allegations, according to Reuters.

Reports of Russian attacks on Ukrainian grain facilities have also mounted. Haidai accused Russia of attacking a grain elevator tons of grain in Rubizhne, a city in Luhansk, in April. Nearly 19,000 tons of wheat and about 9,400 tons of sunflower product was destroyed, he said. Earlier this week, the regional governor of Dnipropetrovsk shared a video of a rocket attack which he said destroyed a grain warehouse in the Synelnykove district.

Satellite images provided to The Washington Post by Planet Labs, a public Earth imaging company, taken on April 8 and April 21, show the elevator before and after the attack. In the April 21 image, the majority of the facility appears completely flattened.

German Agriculture Minister Cem Ozdemir has accused Russia, the world’s top wheat exporter, of using the war in Ukraine to gain a competitive advantage on the export market.

“We keep getting reports about targeted Russian attacks on grain silos, fertilizer stores, farming areas and infrastructure,” he told RedaktionsNetzwerk, a network of German regional newspapers, on Monday, adding that Russian President Vladimir Putin apparently aimed to “eliminate Ukraine as a competitor in the long term.”

Speaking to Fox News’ Griff Jenkins on Wednesday, Ukrainian President Volodymyr Zelensky accused countries of making backroom deals with Moscow to buy grain “stolen from Ukraine.” He did not name the countries.

Ukrainian officials allege Russia is trying to cause a famine in Ukraine. Some have drawn parallels to the Holodomor, the famine engineered by Soviet dictator Joseph Stalin that killed about 4 million people in Ukraine in 1932 and 1933, mostly farmers and rural residents. While even the most serious of today’s allegations hardly compare, the resonance runs deep, amid a conflict that has opened unclosed historical wounds.

Solsky, the agriculture minister, described alleged Russian pillaging of grain in recent weeks as reminiscent of the 1930s.

“The goal is the Holodomor,” Haidai, the Luhansk governor, said after the grain elevator bombing in Rubizhne.

Ukrainian human rights ombudsman Lyudmila Denisova, in a Facebook post, repeated the comparison, and called the exportation of grain from occupied areas a violation of the Geneva Conventions.

The term invokes a horrific episode of cruelty from Moscow toward the Ukrainian people. During the Holodomor — which means death by hunger — Stalin sought to put down resistance to collectivization by blocking rural Ukrainians from accessing food. Some desperate Ukrainians resorted to cannibalism.

Russia has blockaded Ukraine’s Black Sea ports, preventing Ukraine from exporting grain and other agricultural products. Zelensky said Ukraine could lose tens of millions of tons of grain as a result of the blockade, telling Australian news program 60 Minutes that “Russia wants to completely block our country’s economy.”

Global food prices are already skyrocketing. Countries such as Egypt, Lebanon and Pakistan, which rely heavily on Ukrainian wheat, are likely to be hardest hit by export blockages.

Since the war began, Ukraine has sought other ways to transport wheat out of the country. Vysotskiy, the deputy agriculture minister, said the country had increased grain exports in April through these alternative routes, and that he expected another uptick in May.

But Ukraine can’t export nearly as much wheat by train as by sea, and the World Food Program has warned that without functioning ports, the risk of famine around the world is growing.

The Washington Post’s David Stern and Rick Noack contributed to this report.