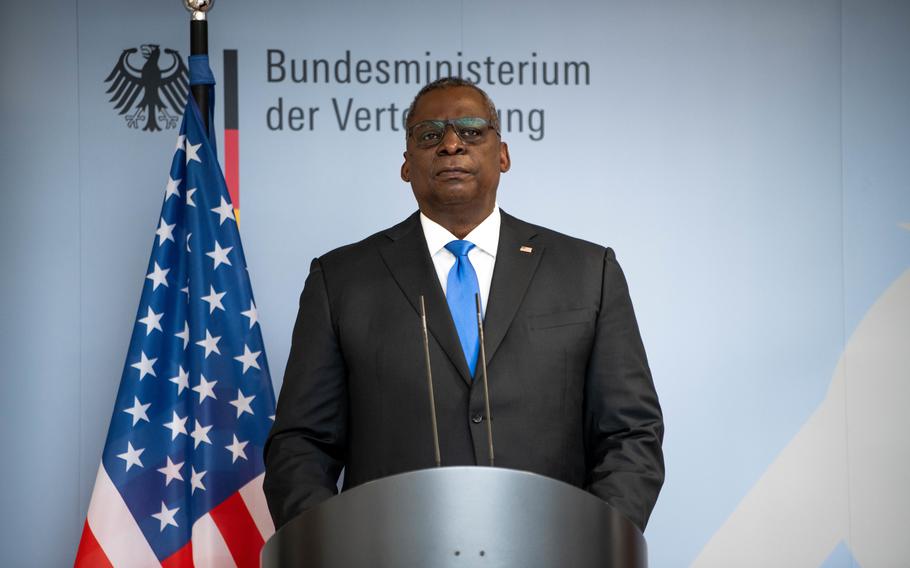 Defense Secretary Lloyd Austin participates in a joint press briefing with former German Defense Minister Annegret Kramp-Karrenbauer in Berlin, April 13, 2021. Austin is slated to meet with his counterparts from NATO and other nations on April 26 at Ramstein Air Base, Germany, to discuss current and future defense needs of Ukraine. (Jack Sanders/Defense Department)

Russia’s invasion of Ukraine has laid bare a deep rift among leaders in NATO member state Croatia, offering a glimpse into how the war has upended the political calculus across Europe and undermined unity within the military alliance.

Croatian President Zoran Milanovic said earlier this week that no lawmaker in Croatia should approve the accession of Finland and Sweden into the North Atlantic Treaty Organization before the West helps his kin in Bosnia-Herzegovina or faces being branded “a traitor.” His role is a largely ceremonial, though he commands the former Yugoslav republic’s armed forces.

The barbed comments escalated a public row with Prime Minister Andrej Plenkovic, his main political rival over the past two years. The premier, who holds executive powers in the European Union’s newest member, accused the head of state of placing himself in the Kremlin’s fold with the comments.

“The stance of being against NATO expansion is a pro-Russian stance,” Plenkovic told reporters in Zagreb late Monday after meeting with his party’s top brass. “This is a catastrophe, and very damaging for Croatia.”

The high-level standoff in the Adriatic nation of 3.9 million is the latest demonstration of how Russia’s war ambitions have shaken relationships in countries far from the front lines. In Germany, Chancellor Olaf Scholz has struggled to account for his party’s past ties with Moscow, while Finland and Sweden have abandoned policies of neutrality that held throughout the Cold War to join NATO.

The clash in Zagreb may undermine NATO Secretary General Jens Stoltenberg’s insistence last week said the alliance would welcome the two Nordic states with “open arms.” The group decides on new members by consensus, after consultations among member countries.

Milanovic, himself a former prime minister who remains Croatia’s most popular politician, has condemned Russia’s aggression. But he’s also criticized the premier’s unwavering support of Kyiv as irresponsible in the light of the risk of an expanded war with the Kremlin.

The president’s remark last month that Ukraine was a “corrupt state” prompted the prime minister to apologize to the government in Kyiv and widened the rift between the two, with Plenkovic implying that Milanovic was a “Russian agent.”

As premier, Plenkovic leads a government with his center-right Croatian Democratic Union. Milanovic is a former leader of the center-left Social Democrats.

The prime minister said the quarrel broke all channels of communication between the two leaders, a high-stakes estrangement for a nation seeking to adopt the euro as early as next year and join the EU’s visa-free Schengen travel zone.

Zarko Puhovski, political science professor at the University of Zagreb, laid the blame with the president -- and said it posed a risk to the EU’s newest member state.

“Milanovic’s duty is to harmonize and stabilize the workings of institutions, but what he is doing is exactly the opposite,” Puhovski said in an interview. “In what’s essentially an interpersonal conflict raised to a state level, he’s risking the goodwill that Croatia has in Europe and is damaging the country’s reputation.”