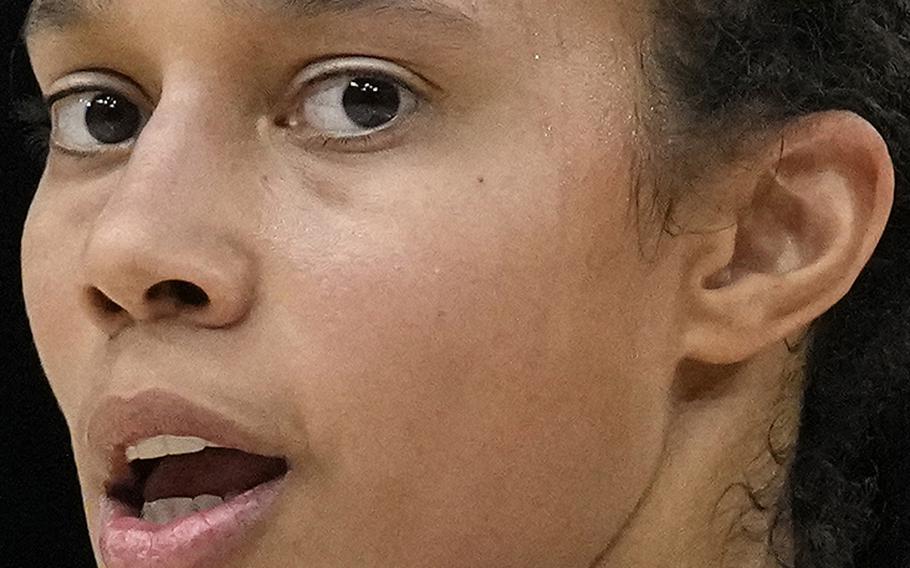 FILE - Phoenix Mercury center Brittney Griner is shown during the first half of Game 2 of basketball’s WNBA Finals against the Chicago Sky, Oct. 13, 2021, in Phoenix. Griner remains in Russia two months after she was detained arriving at a Moscow airport in mid-February. Russian authorities said a search of her luggage revealed vape cartridges that allegedly contained oil derived from cannabis, which could carry a maximum penalty of 10 years in prison. (Rick Scuteri/AP)

The U.S. government is now characterizing Brittney Griner’s arrest in Russia as a “wrongful detainment,” an official designation that indicates it will no longer wait for the WNBA star’s case to proceed through the Russian legal system and will take more aggressive steps to negotiate her release.

“The Department of State has determined the Russian Federation has wrongfully detained U.S. citizen Brittney Griner,” a State Department spokesperson said in a statement provided to The Washington Post. “The U.S. government will continue to undertake efforts to provide appropriate support to Ms. Griner.”

Griner, 31, has been in Russian custody since February, when she was arrested at an airport outside Moscow. Russian authorities alleged she illegally brought vape cartridges containing hashish oil into the country. She has not been formally charged but is scheduled to have another court hearing on May 19.

It was unclear what prompted the State Department’s shift in how it characterized Griner’s case, news that was first reported Tuesday by ESPN. However, it came a week after the release of former U.S. Marine Trevor Reed in a prisoner swap with Russia. Reed had been held in Russia since August 2019.

An unnamed official told ESPN that Griner is not considered a hostage, which would be a different legal classification.

Previously, government officials and representatives for Griner had taken to working behind the scenes, keeping a low profile as they addressed a situation complicated by Russia’s invasion of Ukraine. The Phoenix Mercury star and two-time Olympic gold medalist was arrested Feb. 17 and accused by Russian officials of having vape cartridges containing hashish oil in her luggage at Sheremetyevo Airport near Moscow, an offense that could carry a sentence of up to 10 years in prison. Griner was returning at the time to Russia, where she plays for UMMC Ekaterinburg during the WNBA offseason.

In a March court hearing, her arrest was extended until May 19, according to Russian news agency TASS. A person close to the situation told The Washington Post that the hearing involved an appeal from Griner’s Russian legal team, which challenged her detention and sought to have her transferred to house arrest while the investigation is ongoing. Once the investigation is complete, a trial date will be set. If that hasn’t happened by May 19, an extension will be considered at another hearing.

“We feel really good about [the “wrongful detainment” classification],” an unnamed source ESPN said is close to Griner told the network, “but we also know it can drag out, so we don’t want to get our hopes too high.” ESPN cited another unnamed source who confirmed that Bill Richardson, a former U.S. ambassador who has worked privately for years as an international hostage negotiator, agreed last week to work on Griner’s case.

“We are working very closely with her team. Her case is a top priority for us,” State Department spokesman Ned Price told CNN last week. “I can tell you that with the utmost certainty. We’re in regular contact with her team, we regularly are engaging through our embassy in Moscow with their counterparts in order to see to it that she’s treated fairly, to see to it that we have the consistent access to her that the Russians are required under the Vienna convention to provide.”

The WNBA took steps Tuesday to raise the profile of her case, announcing that it would place “BG 42” decals on the floor of its arenas when its season opens Friday. The Mercury will host the Las Vegas Aces.

Many WNBA players head overseas during the offseason to augment their salaries and Griner, one of the league’s most recognizable stars, earns a WNBA maximum $228,000 with the Mercury. During her detention in Russia, the league’s Board of Governors approved Phoenix paying her salary, according to the Associated Press.