EU to propose phasing out Russian oil by end of year 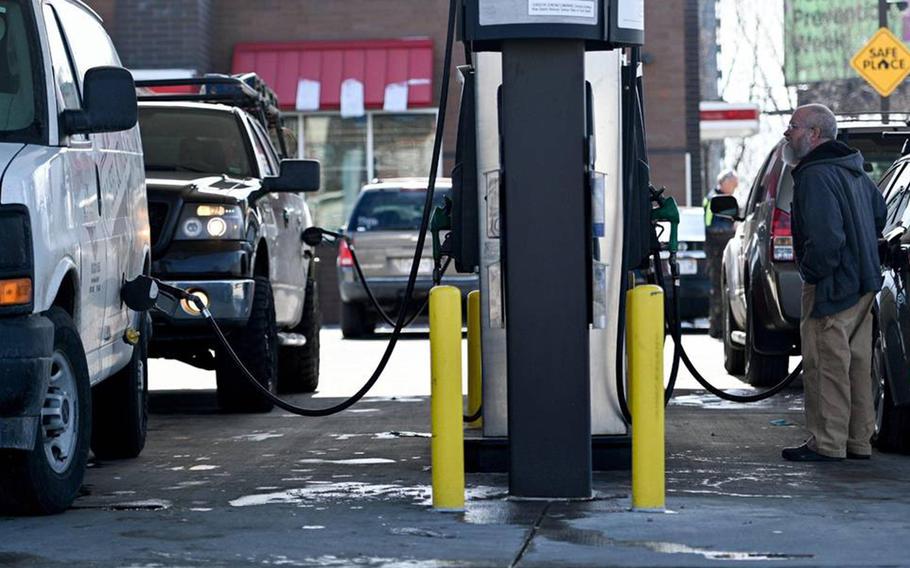 Drivers fill up at a QuikTrip in North Kansas City on March 8, 2022. After the ban of Russian oil into the United States to punish Russia for its invasion of Ukraine, gas prices have hit a record. Now the EU is considering similar measures. (Jill Toyoshiba/Kansas City Star/TNS)

BRUSSELS (Tribune News Service) — The European Union is set to propose a ban on Russian oil by the end of the year, with restrictions on imports introduced gradually until then, according to people familiar with the matter.

The EU will also push for more banks from Russia and Belarus to be cut off from the international payment system SWIFT, including Sberbank PJSC, said the people, who asked not to be identified because the discussions are private. The U.S. and U.K. previously imposed sanctions on Sberbank, Russia’s largest financial institution.

A decision on the new sanctions could be made as soon as the coming week at a meeting of the bloc’s ambassadors, according to the people. The proposed measures, which would make up the EU’s sixth package of sanctions since Russia invaded Ukraine in February, have yet to be formally put forward and could change before that happens.

EU sanctions require the backing of all 27 member states to be adopted and several countries, such as Hungary, have long resisted measures targeting Russian oil. Bloomberg reported this week that Germany, earlier another holdout, has signaled its blessing for a gradual ban.

German Economy Minister Robert Habeck on Thursday said in an interview with public broadcaster ZDF that Berlin would not stand in the way of an oil embargo, but expressed skepticism that it’s the most effective means of damaging President Vladimir Putin.

An oil embargo would dramatically raise the stakes with Russia as the EU, the single largest consumer of crude and fuel from Russia, seeks to pressure Putin over his war and comes as tensions are already high over gas supplies. In 2019, almost two-thirds of the bloc’s crude oil imports came from Russia.

Other options that have been discussed to slash Russia’s oil revenue have included price caps, special payment mechanisms and tariffs. Belarus would be included in the package for its role in aiding the Russian invasion, including acting as a staging ground for troops at the start of the offensive.

The EU is also considering treating oil shipped via tankers and through pipelines differently, with the latter being easier to sanction, the people said.

The measures are aimed at hitting Russian revenues from oil exports as much as possible without leading to turmoil on global markets. A spike in oil prices could boost the income that Moscow gets from sales rather than serve as a punishment.

The discussions take place amid a stand-off between the EU and Moscow over how to pay for gas imports. The EU has said that a mechanism demanded by Russia to pay for the supplies in rubles would breach the bloc’s sanctions. Russia says it will stop sending gas to countries that don’t comply.

Poland and Bulgaria have already been cut off for failing to abide by Putin’s new terms, but other nations are confident they can keep the gas flowing.

The EU has imported some $46 billion worth of fossil fuels from Russia since it invaded Ukraine, according to the Centre for Research on Energy and Clean Air.

Other proposals to be discussed as part of the new sanctions package include restrictions on consultancy and cloud-based services, as well as on real-estate purchases, according to the people. There could also be more individual listings, including military officials, tycoons and their associates and those deemed responsible for alleged war crimes committed by Russian troops in Ukraine.

Some member states are also pushing to tighten existing restrictions on maritime trade and ports as part of the package, the people said.