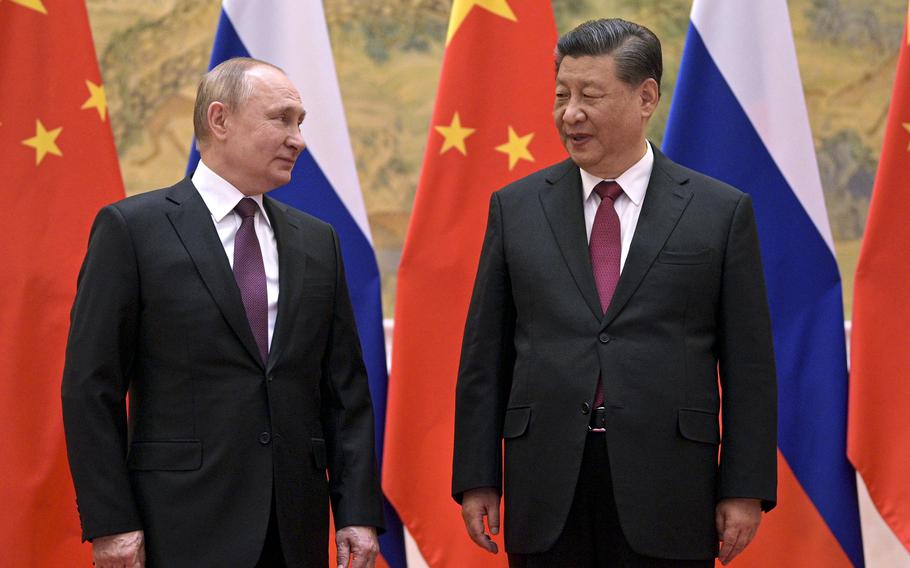 Chinese President Xi Jinping, right, and Russian President Vladimir Putin talk during their meeting in Beijing, China, Friday, Feb. 4, 2022. With Russia’s military failings in Ukraine mounting, no country is paying closer attention than China to how a smaller, outgunned force has badly bloodied what was thought to be one of the world’s strongest armies. (Alexei Druzhinin, Sputnik, Kremlin Pool Photo via AP)

Russia’s war on Ukraine has triggered a profound reassessment in European capitals of their individual and collective relations with China.

Confronted by the need to rapidly unwind a dependence on Russian energy built up over decades, government officials from Rome to Prague are re-evaluating the extent of their economic and political ties to China.

Senior lawmakers in Berlin who now concede that such closeness to Russia was a historic liability are starting to see the danger of repeating the mistake with another authoritarian regime, raising alarm bells over Germany’s status as Beijing’s largest European trading partner.

Nations in central and eastern Europe are casting fresh doubt on the wisdom of the so-called 16+1 forum with China. Italy has just strengthened its veto power against foreign takeovers, a measure directed at China.

At the European Union level, attitudes have soured over Beijing’s refusal to condemn Russia’s invasion and its attempts to undermine the transatlantic unity the war fostered. A virtual EU-China summit on April 1 took place in the context of what a person familiar with the discussions described as an increasingly challenging relationship.

Against the backdrop of war in Europe, the EU went into the talks with the key priority of calling on China to use its influence with Russia to stop the bloodshed, the person said, adding there was a serious concern that continued inaction by China would have a lasting negative impact on EU relations.

After the summit, a readout from the Ministry of Foreign Affairs in Beijing said that President Xi Jinping called on Europe to have an “autonomous” view of China, and that the solution to the conflict was to accommodate the “reasonable security concerns of all parties concerned.”

“A dialogue of the deaf” was how the EU’s foreign policy chief, Josep Borrell, described the exchange with China.

After Xi met with Vladimir Putin in early February and declared a “limitless partnership,” Beijing has attempted to stay neutral in the conflict, expressing understanding for the Russian president’s stance even while defending Ukraine’s sovereignty.

Beijing is unlikely to welcome the instability and economic turmoil Putin’s war has brought. Yet even if its ability to influence him is limited, the EU argues China has unique channels it can use to try.

The view from a European diplomat in Beijing is that the war is pushing China and Europe further apart, strengthening their systemic rivalry. The pandemic and Europe’s realization that it relied on China for basic medical supplies was the wake-up call; Russia’s war on Ukraine bolsters the argument that Europe must reduce its dependence on Beijing, the diplomat added.

“This is really the awakening of the West,” said Lithuanian Foreign Minister Gabrielius Landsbergis, whose Baltic nation suffered a collapse in exports to China after it tussled with Beijing over Taiwan, the island democracy China regards as its territory. The EU lodged a complaint with the World Trade Organization in March over China’s treatment of Lithuania.

“The main lesson that we should learn from Russia’s war in Ukraine is that trade alone doesn’t change how authoritarian countries act,” Landsbergis said in an interview in Vilnius. “When we’re talking about China, we are clearly seeing that new dependencies are being developed.”

China overtook the U.S. as the EU’s largest trading partner in 2020, with total trade worth some $868 billion last year.

The war in Ukraine has snarled up already fragile supply chains on trade routes between China and Europe, while adding to soaring costs for energy and raw materials. But geopolitical considerations are also influencing firms operating in China.

A majority of German companies there said in late March -- prior to the Covid Zero lockdowns in Shanghai and elsewhere -- that the crisis caused by the war in Europe was impacting their China strategy, a survey of 391 members of the trade chambers found.

A third of respondents said they expected to put planned business or investments on hold, while 46% saw a decrease in the attractiveness of the Chinese market. Some 10% said existing business might be moved out of China, and 27% said they expected diversification to accelerate in Asia.

Jens Hildebrandt, executive director of the German Chamber of Commerce in North China, says the trend is away from globalization and toward more of what he calls “localization,” where companies build localized supply chains to serve specific markets. The U.S.-China trade conflict spurred that development, “and the Ukraine war gives another push to that,” he said by phone.

For Joerg Wuttke, who heads the EU Chamber of Commerce in China, “the kind of public image of China when it comes to Ukraine is really making a difference.” Taken along with its Covid Zero policy and the associated disruptions to business, “what really matters now is the perception of China becoming unreliable,” he said, calling it a “new dimension.”

EU-China relations have deteriorated sharply in the past year, marked by the imposition of reciprocal sanctions over the human rights situation in Xinjiang. China hit members of the European Parliament, putting passage of an ambitious EU-China investment deal on ice. Its treatment of Lithuania added to tensions.

In March, two weeks after Russia’s invasion, China warned the U.S. against trying to emulate NATO in the Pacific and dismissed comparisons between the security disputes over Ukraine and Taiwan.

“China-EU ties are already facing growing difficulties on various issues, and bringing more points of friction based on nothing is not in the interest of either side,” the Chinese Communist Party’s Global Times newspaper said in an op-ed this week calling on the EU not to “fall into Lithuania’s trap.”

Going into the April summit, Brussels and member states had hoped that Beijing would halt the “downward spiral” in EU-China ties by using its leverage on Russia to help end the war, said Janka Oertel, director of the Asia program at the European Council on Foreign Relations.

“That hope has been shattered,” she said in an online commentary.

China always views relations with the EU from a “strategic and long-term perspective,” and stands ready to work with Brussels, Foreign Ministry spokesman Zhao Lijian said at a regular press briefing on Friday. “We hope the European side will come to an independent perception of China and adopts an independent China policy.”

At the same time, Zhao said that China’s ties to Russia were a “new model” for the world.

In the EU, the sense of dismay at China is arguably most acute among countries in central and eastern Europe that have the most hawkish views on Russia. Paradoxically, they are also among the EU nations with which China had the best relations via its 16+1 forum that allowed smaller states an audience with Beijing’s leadership.

Disaffection with the forum has long been evident, and Lithuania quit last year. A Chinese diplomat was dispatched to the region last week, fanning speculation that others may now be considering a way out. She was met by a warning from the Czech government that China’s endorsement of Russia would hurt its relations with the whole EU.

The Dutch have woken up to the China threat in recent years, yet that doesn’t mean they are going to stop trading with or talking to Beijing, people familiar with the government’s thinking said.

Some European companies are increasing their focus on China. One of Volkswagen AG’s priorities for 2022 is to “boost our #China business,” Chief Executive Officer Herbert Diess said in a post on Linkedin.

Europe needs China to stabilize the economy as it suffers spillover from the war, according to Henry Wang Huiyao, founder of the Center for China & Globalization, a policy research group in Beijing set up as a bridge explaining China’s position to the world.

“The message is that if the EU militarily is more bonded to NATO now, economically they will have to be more bonded to China as time goes on,” he said.

The political mood in Europe’s biggest economy appears to be shifting in the opposite direction. German Finance Minister Christian Lindner, speaking at the Ludwig Erhard Summit last week, said that Berlin needed a whole new business model to reduce its economic reliance on China.

Lars Klingbeil, who co-leads Chancellor Olaf Scholz’s Social Democratic Party, told the same conference of the need to learn the lessons of Germany’s Russian policy and “end the dependence on China.”

In Italy, Prime Minister Mario Draghi has hardened his stance on China after Russia’s invasion. Italy strengthened its veto powers against foreign takeovers this month by setting up a special division to oversee any potential merger, enabling it to block a deal if it involves a strategic sector.

“The war has already triggered intense debates on critical infrastructure and resilience in Europe,” Agatha Kratz, an associate director of the Rhodium Group, and Max Zenglein, chief economist at the Mercator Institute for China Studies, said in a joint report this week.

The era of “massive Chinese investment” in Europe may be over, they said.