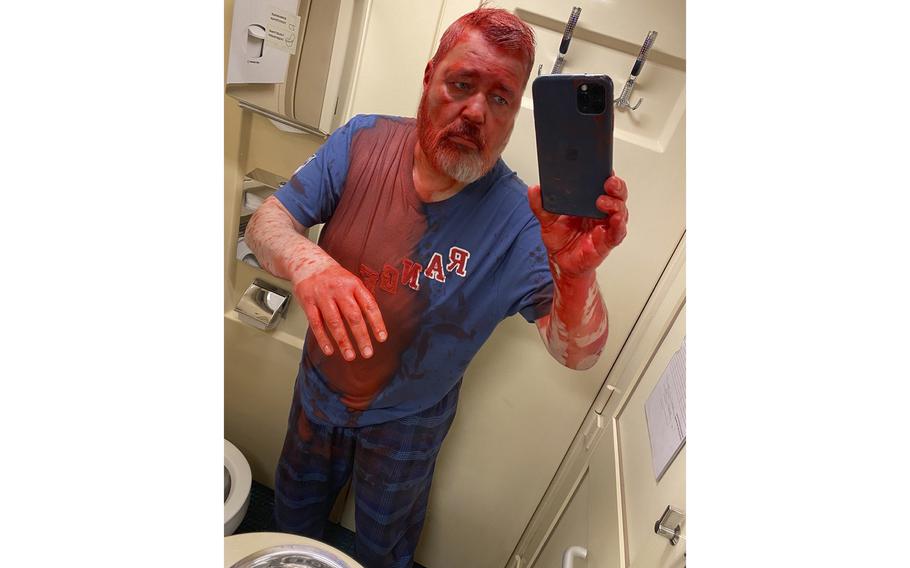 In this photo published on Novaya Gazeta Europe’s Telegram channel, Nobel Peace Prize-winning newspaper editor Dmitry Muratov takes a selfie after he said he was attacked on a Russian train by an assailant who poured red paint on him, causing his eyes to burn severely, Russia, Thursday, April 7, 2022. Muratov told Novaya Gazeta Europe, a project launched by newspaper staff after the paper suspended operation last week under government pressure, that the Thursday assault happened on a train heading from Moscow to Samara. (Novaya Gazeta Europe’s Telegram channel via AP)

The U.S. government has assessed that Russian intelligence was behind an attack earlier this month on a Nobel Prize winner and prominent Russian editor who had criticized the Kremlin’s war against Ukraine.

Dmitry Muratov, the editor of the independent Russian newspaper Novaya Gazeta, was about to travel on a train from Moscow to Samara, Russia, on April 7 when an assailant attacked him with a mixture of red paint and acetone, leaving his eyes with a chemical burn. The assailant yelled, “Muratov, here’s one for our boys” - a reference to Russian forces fighting in Ukraine.

U.S. intelligence has concluded the incident was the handiwork of Russian intelligence, according to a U.S. official, who spoke on the condition of anonymity under rules set by the Biden administration. The official did not give any detail about how U.S. intelligence had come to make that assessment, citing the need to protect sources and methods.

“The United States can confirm that Russian intelligence orchestrated the 7 April attack on Novaya Gazeta’s editor in chief Dmitry Muratov, in which he was splashed with red paint containing acetone,” the U.S. official said in a statement.

Muratov wasn’t immediately available to comment on the U.S. intelligence assessment because he was traveling, a spokeswoman for Novaya Gazeta said. The Russian Embassy in Washington didn’t respond to a request for comment.

Muratov, who was honored with the Nobel Peace Prize last year alongside Filipino journalist Maria Ressa, came out swinging after Russian President Vladimir Putin announced his war against Ukraine on Feb. 24.

The 60-year-old editor called for a broad antiwar movement, asserted Ukrainians were not enemies of Russia, and published the next issue of Novaya Gazeta in both Russian and Ukrainian. A giant, front-page headline read, “Russia is bombing Ukraine.”

The newspaper continued to operate even after Putin signed a censorship law in early March that threatened up to 15 years in prison for those who publish what Russia called “fake” information about its armed forces.

Although the paper attempted to comply with the wartime censorship, the pressure from Russian authorities only mounted. In late March, the country’s communications regulator sent a second warning to Novaya Gazeta that threatened the loss of its media license. As a result, the paper announced that it would suspend operations in Russia until the end of the conflict.

The newspaper made an exception on April 12 to publish an investigation into the attack on Muratov.

The Nobel laureate managed to photograph his assailant before the man escaped into Moscow’s Kazansky railway station, where the train had been waiting to depart when the incident occurred.

In its investigation, the paper identified the suspected assailant as Nikolai Trifonov, a 41-year-old Russian who has run in nationalist and veteran circles, including at the prestigious Moscow State University. The paper also reported that he had used other names in the past. He could not be reached for comment.

The assailant acted alongside another man who was filming the attack as it took place. Within hours of the incident, a video of the attack appeared in the pro-Russian military channel “Union Z of paratroopers” on the Telegram messaging service. An accompanying message threatened Russians such as Muratov with retribution for supporting Ukraine.

“We will come for each of you, just wait!!!” the message said.

The day after the attack, the Russian Ministry of Internal Affairs said in a statement that a man born in 1984 had been arrested in connection with the assault and a second man involved in the incident was being sought by authorities.

The Russian news channel Baza later identified the man who had been detained; Novaya Gazeta’s investigation concluded he was not the assailant but possibly the camera operator.

The paper’s investigation did not link either of the attackers to Russian intelligence.

Russian intelligence has a track record of going after Kremlin critics when they are traveling within Russia. Opposition figure Alexei Navalny, for instance, was poisoned in August 2020 shortly before boarding a plane back to Moscow from the Siberian city of Tomsk.

The online investigative outlet Bellingcat identified Navalny’s poisoners as Russian intelligence operatives and found instances in which they had followed other Kremlin critics to Russian provinces to poison them.

The April 7 attack on Muratov came amid a wave of similar intimidation against other journalists and government critics. Two weeks before the train assault, another prominent Russian journalist, Alexei Venediktov, the longtime head of the now-shuttered Echo of Moscow radio station, found a severed pig’s head outside his apartment door alongside an antisemitic message. Vladimir Kara-Murza, a Russian opposition activist and Washington Post opinions contributor, was charged with spreading “false” information about Russia’s military after he called the government “a regime of murderers.” He also earlier was poisoned in an attack by suspected government operatives.

As the invasion of Ukraine advanced, the Russian government moved swiftly to gag reporters, ushering in a level of censorship and state control over media unseen in Russia since the Soviet era. Media outlets critical of the Kremlin were forced to shut down. Hundreds of Russian journalists fled the country after the new censorship law made their work impossible. Many of them have resorted to publishing their reports on the messaging application Telegram or on YouTube and other websites from locations outside the country.

A number of Novaya Gazeta journalists have launched Novaya Gazeta Europe, which is publishing outside the country in Russian and English online. Nadezhda Prusenkova, a spokeswoman for Novaya Gazeta, said the European publication is a separate, stand-alone project run by longtime Novaya Gazeta political editor Kirill Martynov, unrelated to Muratov or the flagship Russian paper. She said Muratov isn’t leaving Russia and plans to resume publishing the Russian newspaper once Moscow announces the end of military operations in Ukraine.

Novaya Gazeta’s staff have faced attacks, assassinations and threats in the years since the newspaper was founded in 1993, but this is the first time the paper has been forced to suspend publication.

The paper established a vaunted reputation for its investigative reporting and coverage of Moscow’s wars in Chechnya. Six members of Novaya Gazeta’s staff were killed from 2000 to 2009, including journalist Anna Politkovskaya, who was shot in the elevator of her Moscow apartment building in 2006.

Muratov dedicated his Nobel Peace Prize to those members of the paper’s staff who lost their lives because of their work.