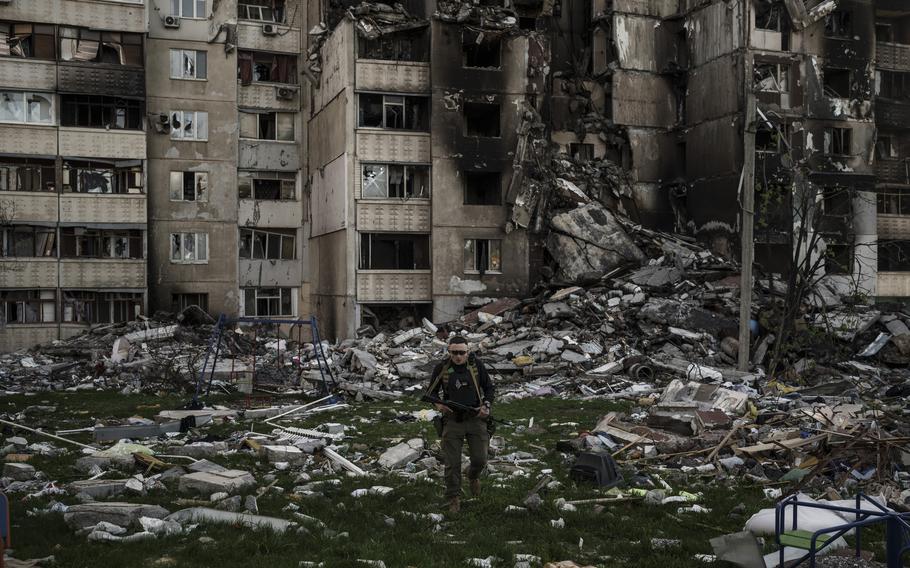 A Ukrainian serviceman walks amid the rubble of a building heavily damaged by multiple Russian bombardments near a front line in Kharkiv, Ukraine, Monday, April 25, 2022. (Felipe Dana/AP)

The United States is monitoring events in the eastern European country of Moldova, the Pentagon said Tuesday, after the breakaway republic of Transnistria bordering Ukraine said explosions over the past two days hit a radio center and a security headquarters.

The reports of explosions could stoke fears about the scope of Russia’s war in neighboring Ukraine, and prompted Moldova’s president to convene a meeting of the country’s security council as she vowed to prevent an escalation.

Pentagon spokesman John Kirby told CNN in an interview on Tuesday it was too soon “to know exactly what happened here, who’s responsible” for the apparent explosions. “We’re watching this as best we can.”

A Russian military commander said last week that one goal was to establish a corridor through the south of Ukraine to Transnistria - a strip of land with a population of nearly 500,000 that is backed by Moscow and hosts Russian troops. The region, which broke away after the collapse of the Soviet Union triggered a conflict in the early 1990s, is not recognized as independent by any country but operates separately from Moldova.

It was unclear whether the commander’s comments on Transnistria reflected official policy, although Ukraine depicted them as proof of the Kremlin’s ambitions beyond its borders and Moldova summoned the Russian ambassador to express “deep concern.”

No one immediately claimed responsibility for the blasts. A Moldovan government body warned Monday of possible attempts to “create pretexts for straining the security situation in the Transnistrian region” and the Ukrainian Defense Ministry called the blasts a “planned provocation by the Russian special services.”

Meanwhile, the Russian Foreign Ministry said Tuesday the country wanted to avoid a scenario in which it “will have to intervene in the conflict in Transnistria,” in a statement published by Russia news agency RIA describing the news of explosions as “alarming.” The head of pro-Moscow separatist forces fighting to expand their grip in eastern Ukraine, Denis Pushilin, said the latest incidents in Transnistria “would require the continuation” of Russia’s military operations.

The head of Transnistria, Vadim Krasnoselsky, on Tuesday blamed Ukraine for “traces of terrorist attacks,” according to Russian news agency TASS.

The Washington Post could not independently verify the claims made by any side.

In Transnistria, the Internal Affairs Ministry said explosions in the village of Mayak on Tuesday morning damaged two antennae that broadcast Russian radio. It put out photos of the collapsed towers a day after declaring that several blasts hit the Ministry of State Security building in the capital and that preliminary information suggested rounds were fired from a rocket-propelled grenade launcher.

The ministry said there were no injuries. The office of Transnistria’s leader reported a third incident on Tuesday, an attack on a military unit near the village of Parcani, without giving further details.

As the breakaway region raised its security threat level, Moscow said it was “very closely watching” Transnistria. Kremlin spokesman Dmitry Peskov added there were no plans for contacts between Russian President Vladimir Putin and his Moldovan counterpart Sandu. “Of course, news from there causes concern,” he said.