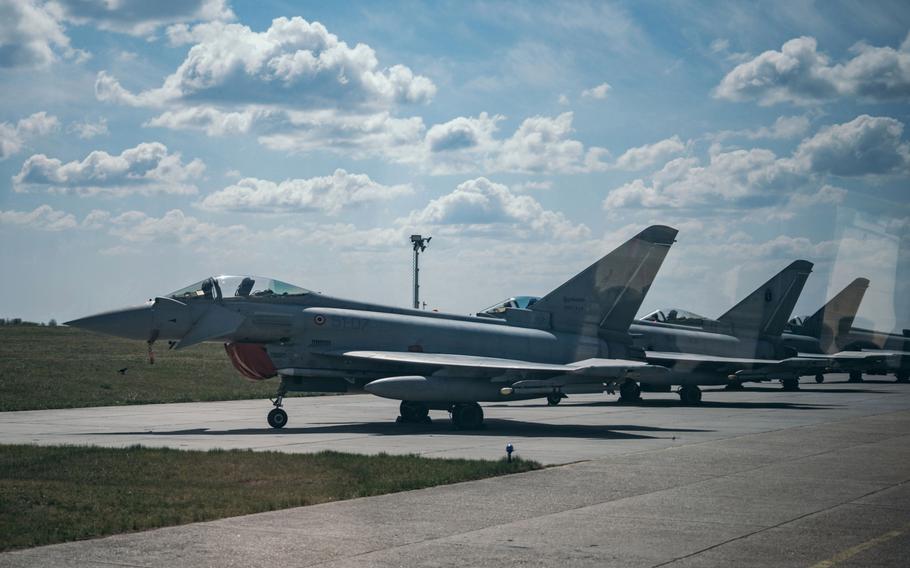 Military aircraft at the Mihail Kogalniceanu Military Base in Constanta, Romania, on April 13, 2022. (Andrei Pungovschi/Bloomberg)

The economic and budgetary benefits of lower military spending enjoyed by the West since the end of the Cold War look set to dwindle as Russia’s invasion of Ukraine forces the focus back to defense from Berlin to Washington.

The coming ramp-up in security outlays threatens to crowd out space on already-strained government budgets for politically popular social priorities and may well lead to higher taxes and bigger deficits.

It might also divert money from more productivity-enhancing areas of the economy, robbing societies of some the resources they’ll need in the future to support aging populations.

Former president George H. W. Bush and his then U.K. counterpart, Prime Minister Margaret Thatcher, popularized the term “peace dividend” to highlight the gains the West would reap from the disintegration of the Soviet Union-led Eastern bloc in the early 1990s. The benefits, indeed, were enormous.

The U.S. slashed discretionary defense expenditures from an average 6.3% of gross domestic product from 1966 to 1991 to 3.6% since then, according to data from the White House.

That has effectively saved the federal government trillions of dollars over that time frame -- even after taking account of money diverted to wars in Iraq and Afghanistan. It also helped enable Washington to run a budget surplus in the late 1990s, freeing up resources for companies to spend on boosting productivity as the Internet proliferated.

With the U.S. continuing to guarantee their security, European countries were even more aggressive in cutting back. Germany, the region’s largest economy, has saved more than 500 billion euros ($536 billion) since 1991 as it was able to keep military expenditure below 2% of GDP, according to Hubertus Bardt of the German Economic Institute in Cologne.

“There’s been substantial relief for public coffers thanks to the reduction of defense spending,” he said.

But the “bang for the buck,” so to speak, is much less than for some other forms of expenditure--for instance, infrastructure, such as roads and airports.

And while the U.S. economy benefited from commercial applications of breakthroughs financed by military spending, such payoffs are far from certain and are obviously not the primary focus of the defense effort.

“Defense is expensive. It’s inefficient,” Kori Schake, director of foreign and defense policy at the American Enterprise Institute, wrote in Foreign Affairs this month. “But it is an essential insurance policy designed to guarantee that the U.S. can protect itself, its allies, and its interests.”

With Russian aggression suddenly shifting perceptions in Europe of regional threats, Germany has led the charge in switching toward rearmament. The government has earmarked 100 billion euros to beef up its military after years of underinvestment, has already announced plans to buy fighter jets, and is now weighing a spending spree on antimissile defenses.

“Vladimir Putin’s attack has changed the security situation in Europe,” German Finance Minister Christian Lindner said in March as he unveiled plans for new defense investments. “The peace dividend is used up.”

In one demonstration of that new paradigm on Tuesday, German Defense Minister Christine Lambrecht announced a doubling of defense support for Ukraine to 2 billion euros after international criticism of the country’s hesitant stance. A shipment anti-aircraft tanks was also authorized to aid the war effort.

Other European countries are also stepping up military spending, with non-NATO member Sweden, for example, now aspiring to meet the 2% of GDP target pursued by members of the alliance.

Not all have the financial clout to do that. Analysts at debt ratings company Moody’s Investors Service have identified Italy, Spain, Belgium and Portugal as countries that could face what they called “fiscal risks” if they emulated Germany’s example and lifted defense spending to the equivalent of 2% of GDP.

Another way to supplement such efforts would be joint investment at the E.U. level. The bloc’s leaders have discussed financing as much as 2 trillion euros in new military and energy spending, perhaps with the use of joint debt.

In the U.S., President Joe Biden called on March 29 for a roughly 4% increase for defense outlays to $813 billion in the 2023 fiscal year that begins on Oct. 1, including $682 million in funding for Ukraine.

The bulk of the money in the president’s request -- $773 billion -- is earmarked for the Pentagon in what the White House describes as “one of the largest investments in our national security in history.”

The proposal faced immediate pushback from Republicans in Congress who argued that it fails to keep up with inflation, or with challenges including China’s rising military might and Russia’s war on Ukraine.

Perhaps in a nod to progressive Democrats -- who have long argued that the government should spend less on defense and more on social programs -- Biden’s budget sees military spending falling below 3% of GDP in 2026 and then declining further to 2.4% in 2032, the last year of the budget window.

Some economists -- including a number of Democrats -- doubt that outlays on defense will follow such a declining trend as a share of the economy, even if European nations step up with their own efforts.

“It seems highly implausible that we will not need as a country to increase defense spending considerably more rapidly than current projections of GDP growth, given escalating threats from Russia, from China and potential threats in the Middle East,” said Lawrence Summers, who served as Treasury Secretary under President Barack Obama and is a paid contributor to Bloomberg TV.

He argues that any stepped-up increase in spending should be paid for by increased taxes on the wealthy and corporations, rather than financed by the government issuing more debt.

Other economists have also called for social spending cuts to help make room for national security. Glenn Hubbard -- who served as chief White House economist to Republican President George W. Bush -- supports reforms of the government’s huge Social Security and health care programs that would pare back the benefits going to the well off.

The U.S. and Europe “face fiscal choices that are hard,” said Hubbard, who is now a professor at Columbia University. “This is going forward, year in and year out, about removal of the peace dividend.”