After hesitancy, Germany greenlights some heavy arms for Ukraine 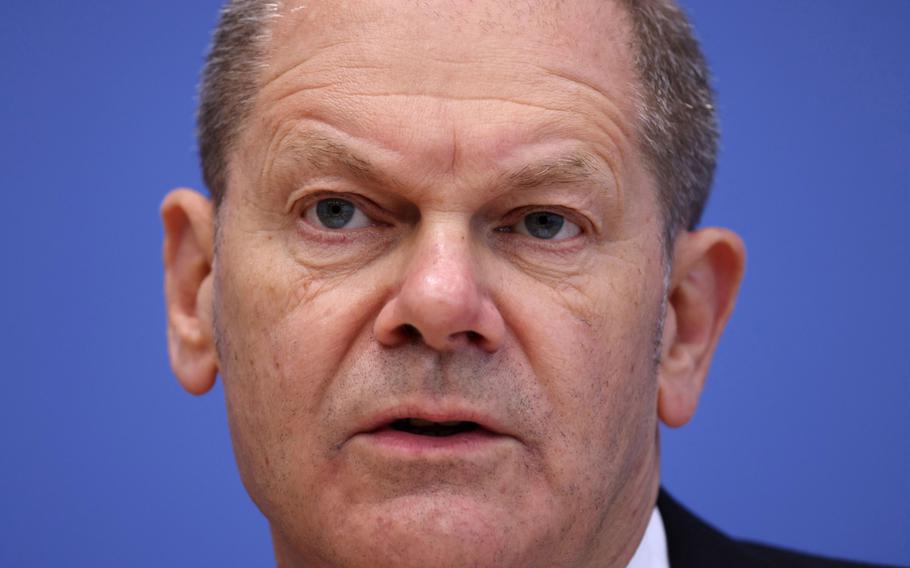 Olaf Scholz during a news conference in Berlin on May 12, 2021. (Liesa Johannssen-Koppitz/Bloomberg)

First, Germany said it couldn’t spare any of its Marder infantry vehicles for Ukraine. Then it was accused of scrubbing such items from a German arms industry list of what was available for Kyiv. Berlin has since proposed sending some Marders after all but to Slovenia, so that country could in turn send its old Soviet-era tanks to Ukraine. And on Tuesday, the government said it would approve the export of German-made armored antiaircraft vehicles to Ukraine.

BERLIN - First, Germany said it couldn’t spare any of its Marder infantry vehicles for Ukraine.

Then it was accused of scrubbing such items from a German arms industry list of what was available for Kyiv. Berlin has since proposed sending some Marders after all but to Slovenia, so that country could in turn send its old Soviet-era tanks to Ukraine. And on Tuesday, the government said it would approve the export of German-made armored antiaircraft vehicles to Ukraine.

“It’s a complete contradiction,” Roderich Kiesewetter, a lawmaker with the conservative Christian Democrats, said of the government’s various statements on sending heavy arms in recent weeks.

As defense leaders from more than 40 countries met Tuesday at the U.S. Ramstein Air Base in Germany, to synchronize efforts to provide military aid to Ukraine, Berlin was just managing to synchronize the position of its own government.

Two months after Chancellor Olaf Scholz announced an epochal change in foreign and defense policy for Germany, dubbed the “Zeitenwende,” its touted new era has been overshadowed at home by the government’s hesitant stance on military assistance to Ukraine.

On Tuesday, as pressure mounted for more decisive action, Defense Minister Christine Lambrecht announced at the Ramstein meeting that Berlin would greenlight Gepard self-propelled antiaircraft guns to be sent from industry stocks. Manufacturer Krauss-Maffei Wegmann had offered to ready and send the 50 decommissioned Gepards in February.

“Germany, together with its allies, stands firmly at the side of its Ukrainian friends who are in dire need,” she said, acknowledging “criticism of Germany in recent weeks.”

“But the numbers speak a different language,” she said. “It is important to me that we continue to stand together here and not allow ourselves to be driven apart.”

In February, Berlin’s announcement - two days after Russia’s invasion - that it would send 1,000 antitank weapons and 500 Stinger missiles was heralded as a sea-change. It had previously maintained that Germany’s world war history constrained it from sending weapons to an active conflict zone.

But policy has lagged behind political and public pressure, even as evidence of Russian war crimes has built and Moscow has announced a new offensive in the country’s east.

Germany has still stopped short of approving requests from its arms industry to send more offensive heavy weaponry such as tanks and the Marders.

“The German government moves under one condition and that’s overwhelming pressure,” Marcel Dirsus, a nonresident fellow at the Institute for Security Policy at Kiel University, wrote on Twitter. “They can’t deliver self-propelled anti-aircraft systems until they can. It’s the same thing over and over and over again.”

Still, he said the announcement at Ramstein was a “strong signal” from Germany after so much reluctance.

While Scholz had pushed ahead with plans to bring the country into a new age of military deterrence, with plans to buy F-35 fighter jets and armed drones, the decision to not send heavy weaponry such as tanks and anti-aircraft systems to Ukraine had drawn criticism not just from the opposition, but also from the ranks of the government’s three-party coalition.

“He has to lead,” said Marie-Agnes Strack-Zimmermann, head of the German parliament’s defense committee, who has emerged as one of the chancellor’s most vocal critics. Her Free Democratic Party, a junior coalition partner in government, on Saturday voted in favor of supplying Ukraine with heavy weapons, including the “rapid provision” of arms from the German Defense Ministry.

The chancellor, known for his cautious public style, is suffering from a communication problem, she said. “The really big problem is not that we send not enough weapons, it’s how you talk about it,” she said.

“We must do everything possible to avoid a direct military confrontation between NATO and a highly armed superpower like Russia, a nuclear power,” Scholz said.

However, with other members of the alliance already sending in heavy weapons, the argument didn’t hold, said Carlo Masala, a professor in international politics at the Bundeswehr University in Munich. The idea of “keeping some doors open and lines of communication to Russia” is probably still in the minds of “some people in the chancellery,” he said.

Meanwhile, he said, Scholz is probably trying keep his party together on the issue, which is particularly divisive within his Social Democrats, given the party’s historic ties to Moscow.

Some 55 percent of Germans are now in favor of sending heavy weapons - including tanks and fighter jets - to Ukraine, according to a recent poll commissioned by German television station ARD. Before the February invasion, polls showed that more than two-thirds of Germans were against sending defensive arms.

“Now is not the time for excuses; now is the time for creativity and pragmatism,” she said in a thinly veiled gibe at Scholz.

Even members of Scholz’s own party had called for a change in the chancellery’s position.

“Almost two months after the time-turning speech, after all that has been learned of the innumerable crimes against civilians and the genocidal nature of the war, it has become clear that Germany still acts with its old mixture of reluctance, hesitation, and backsliding,” Berlin based analyst Oxana Schmies wrote for the Center for European Policy last week.

After Tuesday’s announcement, Scholz’s reasoning as to why heavy arms deliveries weren’t possible looked “weak,” she said, but the planned deliveries are a good step. “Maybe we can be cautiously optimistic,” she said.

Still, the government’s decision to greenlight defensive military equipment rather than offensive heavy weapons is likely “not a coincidence” but still a signal of lingering “overcautiousness,” she said.

With its own military stocks low, Berlin is using a system by which Ukraine orders from German industry and the German government pays. Dedicated funds have been boosted to $2.1 billion, Lambrecht said.

Furor over arms deliveries grew last week after the tabloid Bild reported that the Defense Ministry had excluded heavy weaponry from a list prepared by the German arms industry of what was available.

Kiesewetter, who said he saw both versions of the list, confirmed that heavy weapons, including the Marders and multiple-launch rocket systems, were removed from what was presented to Kyiv.

The Defense Ministry declined to comment, but officials had said they were focusing on supplying equipment that Ukraine can quickly use, and they were working on a deal to send Marders to Slovenia, so it can hand over its Soviet-era T-72 tanks to Ukraine.

Such “backfilling” may help assuage Germany’s discomfort with sending heavy weapons into a conflict zone, but it’s not a long-term solution for Ukraine, said Masala. Germany also said Tuesday that it will train Ukrainian soldiers in Germany on how to use Howitzers sent to Kyiv by the Netherlands.

In the meantime, Germany also needs to work on its messaging, he said. While the German government is the biggest financial donor to Ukraine, “Germany is still perceived as being extremely reluctant,” Masala said, and it is hurting the country’s international reputation.

“Germany has been very disappointing, to put it mildly,” said Yuriy Sak, an adviser to Ukraine’s Defense Ministry. “Hopefully it’s a change in their approach,” he said of the announcement Tuesday.