Escape from Mariupol: 10 minutes to pack up, then a risky 11-hour drive 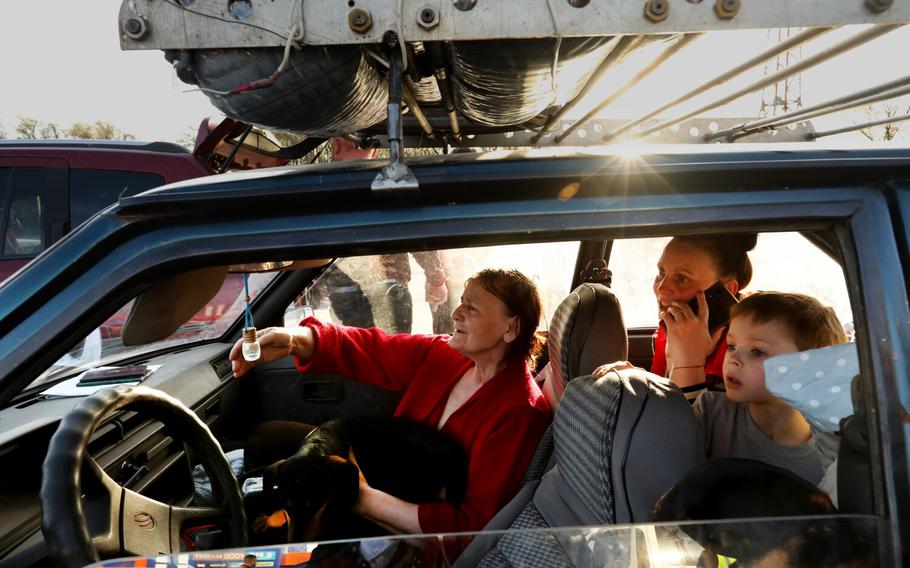 Katerina Gubochkkna, left, holds one of two Dachshunds as she and her daughter, Oksana Strishko, middle, and her son Dima Strishko, age 5, arrive from Russian occupied territory, the town of Vasilyevak, to Zaporizhzhia on April 25, 2022. Families escaping Mariupol and other Russian occupied areas arrived at the eastern edge of Zaporizhzhia on April 25, 2022. They had endured days of bombing. (Carolyn Cole, Los Angeles Times/TNS)

It had taken 11 hours of driving, bargaining for passage through 20 checkpoints manned by stern-faced Russian soldiers, along with the knowledge that every mile took you farther away from home, probably for good. But by 6 p.m., the three families crammed into a worn-down Mercedes van had made it out of Mariupol.

"There were so many bombs," said Volodymyr Korotky, a 56-year-old mechanic who left Mariupol with his family and only two suitcases' worth of clothes he could save from his destroyed apartment. "I'm so happy we're in Ukrainian territory."

He and his wife, along with nine other people, arrived at the parking lot of an Epicenter store, a sort of Ukrainian Home Depot, here on the edge of Zaporizhzhia, which has become the primary node for the hundreds of thousands of Ukrainians fleeing Melitopol, Berdyansk and Mariupol — cities in the south and southeast that bear witness to the horror and despair of Russia's occupation.

For 14-year-old Lizza Onufrieva, the signs of what that occupation would bring came early to her family's home in Mariupol's Ilyich neighborhood, on the very first day of the war, Feb. 24.

"It was 1 in the morning, and we woke up to something exploding very close to us," she said. The teenager ran down to the basement with her mother, Oksana, and Businka, her Jack Russell terrier.

Back then, they had electricity, and the air-raid sirens were still working. But in the days that followed, the bombardment intensified; they would hide in darkness, waiting — hoping — for the sounds to subside. Eventually, the bombing almost seemed normal.

"You just get used to these explosions, and they don't seem so bad until they're near your house," Lizza said. "Businka was terrified, hiding under the table. We went to the basement. She was still very afraid, no matter if I was holding her or not."

On one of the scarier days, they looked outside their home to find a Russian tank in their yard. Russian soldiers barged in, demanding to know if they had seen Ukrainian troops. The tank then began to fire at a car, presumably with Ukrainian soldiers inside.

The worst day for Lizza was March 11, when a trio of bombs slammed into the front yard of her paternal grandparents' home. Her grandfather died that day, not from the ordnance but from the shock that followed. Nine days later, her grandmother died.

"Their hearts couldn't take it," she said.

Day by day, Mariupol turned into a hellscape, with more than three-quarters of its 450,000 people escaping the city. Lizza's mother, Oksana, a professor of probability theory and statistical mathematics at Pryazovskyi State Technical University, didn't want to leave without her own parents, who lived in another neighborhood. But she had lost contact with them March 2, when communications went down in much of the city.

Finally, when she heard of the chance to leave with a few other families, she made the decision to go.

"We were waiting for news, but the main thing is to ensure Lizza's future," she said. "And in Mariupol, I think there's no future."

Because Korotky's apartment was near a military base, he had been forced to spend about a month and a half in a basement because of the constant bombing. In the beginning, when it was possible to leave more easily, he had decided to stay as authorities in the city said that military assistance would come, that everything would be fine. Besides, though his children were grown and living in the capital, Kyiv, his father was in Mariupol, and Korotky didn't want to leave him.

But the situation kept getting worse. Though it was possible to escape from other parts of Mariupol, the Russians were hunting for Ukrainian snipers in his neighborhood.

"They were shooting at the houses from tanks," Korotky said.

Then a bomb struck the building where his father lived in a second-floor apartment; in a moment, seven floors pancaked onto it.

"I couldn't take him out from under the rubble. I couldn't bury him," Korotky said.

The fighting was incessant, transforming swaths of the city into a gantlet of bullets, tank shells and artillery. Although both Ukrainian and Russian authorities repeatedly announced humanitarian corridors, they kept falling through, each side accusing the other of attacking civilians. But with so much of what tied him to the city destroyed, Korotky had to get out.

He received word that his friend Serhiy had found a route out.

"He knew the way where you could give a bribe to someone and be able to pass," Korotky said.

Early Monday morning, Mariupol was relatively quiet, with bombing only happening around the Azovstal steelworks, where the last Ukrainian defenders were besieged by Russian troops. Serhiy called: Korotky had 10 minutes to get his things together and be ready to leave. He and his wife emerged from their basement and ran to the van.

Their route took them through 20 checkpoints. The Russians, Oksana Onufrieva said, didn't take their SIM cards, but combed through their cellphones for any military information.

"We had to pay $200 to three of the checkpoints to let us through," she said.

When they got to Zaporizhzhia, about 140 miles northwest of Mariupol, Ukrainian volunteers and police officers greeted them and took down their information for registration.

"It's hard, especially when families talk about what happened to them, like people being fired upon when they tried to escape," said Dmytro, a police officer standing watch as one of his colleagues talked to the new arrivals. Some people came with children who weren't their own, he added.

"You hear kids talking about how their mother and father were killed in front of their eyes. It's so sad and strange," said Dmytro, who gave only his first name for reasons of security.

Not everyone here in Zaporizhzhia had fled fighting. The situation was relatively quiet in Berdyansk, a coastal city about 40 miles southwest of Mariupol that was captured three days into the Russian invasion. But Leica Kandakova, a 36-year-old manicurist, couldn't accept living under Russian rule.

Her husband, an army medic, had gone missing April 1 during a combat mission. Some of his friends came to talk to her, urging her to leave. So on Monday, she took her 10-year-old daughter, Alexandra, and 11-month-old son, Kyril, and came to Zaporizhzhia. She didn't know where to go exactly, but she knew it was impossible to stay in Berdyansk.

"It was like living in an open-air prison. I just couldn't do it," she said.

Korotky expects he'll never be able to return to Mariupol. The next day, he boarded a train to Kyiv, where he would meet his children, and then he and his wife would continue their journey to the city of Khmelnytsky, farther west.

In the meantime, he had decided he would write a book about his experience.