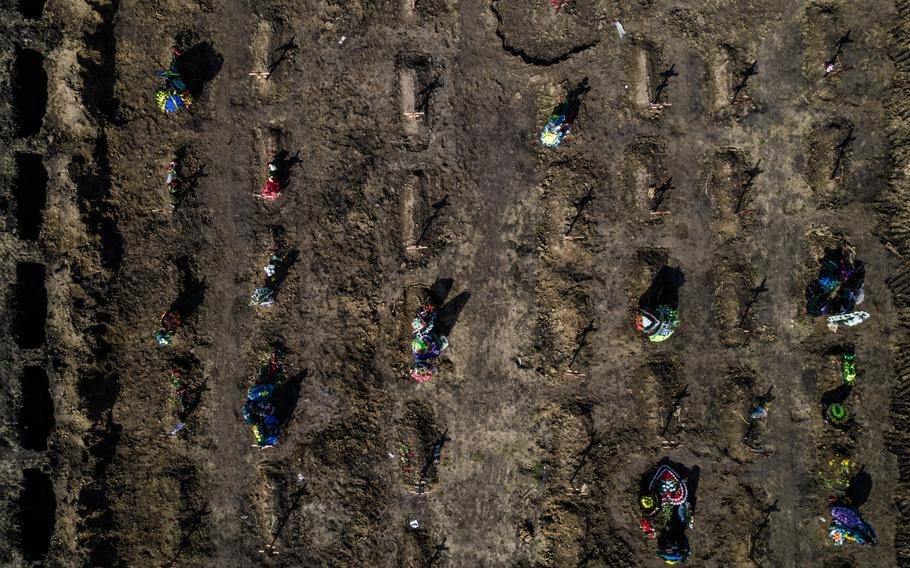 RIGA, Latvia — A Russian commander said Friday that Moscow wants to take “full control” of eastern and southern Ukraine, in part so it could have a path to neighboring Moldova — raising fears that the nearly two-month war could spill outside of Ukrainian borders.

The comments from Rustam Minnekayev, deputy commander of Russia’s Central Military District, seemed to hint that the Kremlin — which has been stymied in its bid to take over the Ukrainian capital — still wants to conquer wide swaths of its neighbor’s land, and potentially threaten the nations that lie beyond. They drew swift condemnation from Moldova, where residents have worried since the beginning of the war they could be next in the Kremlin’s crosshairs.

Minnekayev said capturing Ukraine’s east and south would create a “land corridor” to the Crimean Peninsula — which the Kremlin annexed in 2014 — and give Moscow influence over “vital objects of the Ukrainian economy,” according to the Russia state media outlet Tass. It would also provide “another way out to Transnistria,” Minnekayev said, referring to a thin strip of land that runs along Moldova’s border with Ukraine that functions as a separate nation, though it is not recognized as such, even by Russia.

Minnekayev’s comments came at the end of another grim week in Ukraine — particularly in the eastern Donbas region, where Kremlin forces have refocused their fire in recent days. The devastated southern port city of Mariupol remained under siege, with Russia vowing to trap remaining Ukrainian forces that have been holed up in a steel plant there.

Although tens of thousands of people each day have begun returning to the capital, Kyiv — where Ukrainian forces seemed to successfully push back invading Russian forces — they have done so cautiously, knowing they might soon have to flee once more. Kyiv’s mayor has warned residents to stay where they are, as airstrikes around the city continue.

Russian President Vladimir Putin has previously said the invasion will continue until “full completion,” without detailing what that means, and it was not clear whether Minnekayev’s comments describe official, high-level thinking in Russia. But they give fresh insight into the broader ambitions of those fighting for the Kremlin, including plans for a Russian-controlled passage to Transnistria, the breakaway enclave in Moldova that is held by pro-Russian separatists and hosts roughly 1,500 Russian troops.

Moldova is not a member of NATO, though an incursion on its borders would be an alarming expansion of Russia’s war effort. The remarks were the first time a senior Russian military official has hinted at Russia expanding its offensive beyond Ukraine.

The Moldovan Foreign Affairs Ministry said in a statement to The Washington Post that it had summoned Russian Ambassador Oleg Vasnetov on Friday to express “deep concern” over the commander’s remarks.

“His comments are unfounded and contradict the position of the Russian Federation supporting the sovereignty and territorial integrity of the Republic of Moldova,” the ministry said.

Mimicking language used to justify Moscow’s initial invasion of Ukraine, Minnekayev indicated he was concerned by the “oppression of the Russian-speaking population” in the Transnistria enclave. The Moldovan government released a statement calling the accusations “unacceptable,” adding that the comment would “lead to increased tensions and mistrust in society.”

Russian forces have so far been unable to seize ground in the areas close to the Moldovan border, including the strategic port city of Odessa. Ukrainian officials initially feared that Moscow would use Transnistria as a staging ground for attacks on Odessa, but no such assault materialized.

Minnekayev’s remarks came as senior military officers and defense ministers from the United States and at least 20 partner countries prepared to meet at Ramstein Air Base in Germany on Tuesday to discuss support for Ukraine’s defense and security efforts, the Pentagon’s top spokesman, John Kirby, said Friday.

President Joe Biden announced Thursday that the United States will send $1.3 billion in fresh aid to Kyiv, including $800 million in military assistance. Kirby said, though, that Defense Secretary Lloyd Austin does not have a particular outcome in mind, and that the meeting is not designed to provide specific security guarantees to Ukraine.

“He wants to hear from allies and partners, and from the Ukrainians themselves about what they’re doing and what they will need going forward,” Kirby said, adding that a total of 40 nations, including some NATO members, have been invited.

Ukrainian President Volodymyr Zelensky acknowledged that Russian forces have captured most of the key southern port city of Mariupol after a prolonged siege that exhausted electricity, food and medical supplies. Satellite images taken over the city Thursday show another mass grave where an estimated 1,000 residents may be buried, according to the mayor. Mariupol is particularly significant, because its capture allows the Russians to build a land bridge to annexed Crimea. Zelensky said Friday that regions in the south and east “are the places where the fate of this war and the future of our state is being decided.”

A number of outgunned Ukrainian fighters and civilians remain in a hideout at the Azovstal steel plant, a large industrial complex in Mariupol’s south that backs onto the Sea of Asov. Mariupol’s mayor, Vadym Boychenko, on Friday renewed a desperate appeal for a “full evacuation” of the city. But Deputy Prime Minister Iryna Vereshchuk said no corridors would open in Ukraine on Friday amid unrelenting shelling.

Charles Michel, president of the European Council, said he “strongly urged” Putin in a phone call Friday to immediately open up humanitarian access to Mariupol, after Russia had a day earlier declared its siege of the city a “success.”

As they have for weeks, peace talks produced little substance — with both Russia and Ukraine trading barbs over who is to blame.

Zelensky accused Russia of rejecting a proposed truce during Orthodox Christian Easter, which takes place this weekend. That idea is supported by Pope Francis and U.N. Secretary General António Guterres.

“This shows very well how the leaders of this state actually treat the Christian faith, one of the most joyful and important holidays,” Zelensky said. The head of Ukraine’s Orthodox Church called on people to forgo the holy celebration in areas with heavy fighting this week.

Zelensky said last week that all negotiations with Russia could end if the Mariupol defenders were killed during the city’s capture. Asked for a response to the comment Friday, Lavrov dismissed the remarks. “Russia will not tolerate ultimatums,” he said.

Other countries have continued to pressure Moscow to halt the invasion. The Netherlands said it plans to stop using Russian fossil fuels by the end of year, while Britain and India urged Russia to call an immediate cease fire after a meeting between the two country’s leaders Friday.

“We reiterated the importance of territorial integrity and sovereignty of all nations,” Indian Prime Minister Narendra Modi said. India, which is heavily reliant on Russia for arms sales, has so far shied away from directly criticizing Moscow, and earlier abstained from a U.N. vote to expel Russia from the U.N. Human Rights Council.

British Prime Minister Boris Johnson — who was in India for the visit — announced that Britain will expand defense ties with that country, a move that could help it reduce its reliance on Russian arms.

Recovery efforts and investigations of possible war crimes are ongoing in areas of northern Ukraine where Russian troops withdrew before refocusing their offensive in the south and east.

The head of the United Nations’ atomic watchdog, Rafael Grossi, said it will send a group of security and safety staff to the Chernobyl nuclear power plant Tuesday to conduct tests and ensure there are no accidents at the site in the wake of its occupation by Russian forces. Grossi has expressed “grave concern” over the plant during the invasion, and said next week’s mission is designed to “quickly establish exactly what needs to be done, and how and where.”

The high commissioner for human rights at the United Nations said Friday her mission in Ukraine has uncovered growing evidence of war crimes, and has verified the killings of at least 2,345 civilians. Michelle Bachelet said she expects the actual number of dead to rise after “horrors” inflicted in places like Mariupol come to light.

“Over these eight weeks, international humanitarian law has not merely been ignored but seemingly tossed aside,” Bachelet said.

Ukraine’s top prosecutor, Iryna Venediktova, accused Putin on Friday of planning the rape, torture and killing of civilians who refused to surrender. She told Sky News in an interview that her office had found a “huge number of cases” where Ukrainians had been killed because they had resisted Russian forces, and those killings included summary executions. Venediktova did not offer any evidence to support her allegations.

Zelensky said that Ukraine has suffered $550 billion in economic damage since the war began, and would need “hundreds of billions of dollars” to recover after the conflict.

“The Russian troops are deliberately destroying all facilities in our country that could provide an economic basis for life,” he said.