A packed train to Kyiv, bearing worried and hopeful returnees The depot in Lviv, Ukraine, where families wait for trains to take them home to Kyiv or other cities. (Erin Patrick O’Connor/Washington Post)

LVIV, Ukraine - Train 750L was running nearly an hour behind schedule when it rumbled into the western Ukrainian hub of Lviv one recent afternoon. The delay meant extra time for the dozens of nervous passengers waiting at the depot to ask themselves: Is this a bad idea?

The families huddled on the platform that day are part of a wave of Ukrainians who fled Russian attacks to the safer, western part of the country but are gambling on a return to the capital, Kyiv, now that Russian forces have withdrawn from the area. Ukrainian officials say about 50,000 people a day are going back, despite warnings from Kyiv's mayor to stay put and continued airstrikes around the city.

Drivers report traffic snarls at entrances to the capital. Trains that until recently were full only in one direction - away from Kyiv - are now busy on the return leg, too. The passengers of 750L said the decision to go back was agonizing. They held family meetings to hash out pros and cons. They obsessively watched Telegram channels for reports of violence. They prayed. And then they bought their tickets, the pull of the familiar beating out the uncertainty of war.

"I can't wait to take a shower, see my bedroom, hug my husband. I'm going home," said Liudmyla, standing on the platform with her teenage daughter. Her excitement was tempered by fears so deep that she asked that her last name not be published for security reasons. "No one knows what's going to happen. It's all so unsure," she said.

Other passengers standing in the cold at the ornate, century-old depot expressed that same blend of anticipation and dread, but said it was time to go. They had elderly parents or pets to check on. They'd run out of money or felt they were overstaying their welcome with host families in Lviv. Some had fled so quickly in February and March that they wondered whether their homes would smell of rotten food; one joked that his fridge was a "biological weapon" by now.

Several said they wouldn't unpack for a week - just in case. 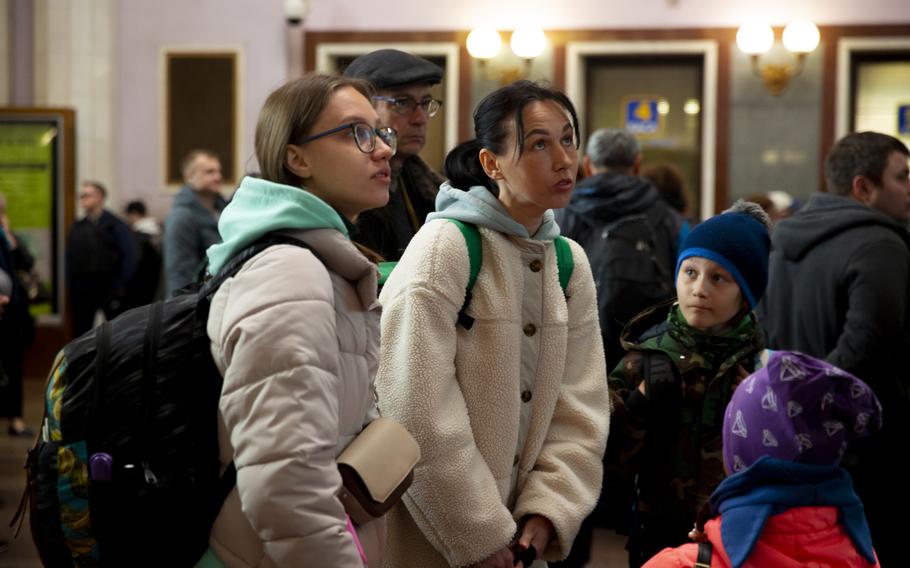 Tanya Morozova, 40, and three of her children wait to board Train 750L in Lviv, Ukraine. (Erin Patrick O’Connor/Washington Post) 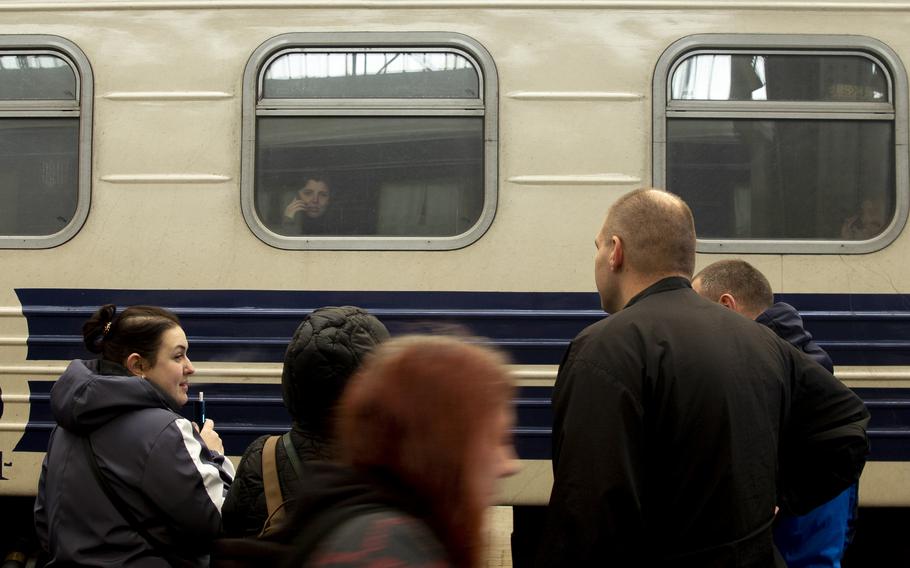 A woman waiting to head home to Kharkiv, Ukraine, sits on a train in Lviv and talks by phone to a friend on the platform, left. (Erin Patrick O’Connor/Washington Post)

"It's a little quieter now. People say it's still not a great time to be there, but it's our home. Our walls will heal us," said Tanya Morozova, 40, whose husband and elder son were still in Kyiv, along with the family's beloved dog, Jack.

Jack was the main draw for Morozova's younger daughter, 7-year-old Varvara. Her 9-year-old son, Hlib, said he missed his toys. The return was more complicated for Morozova's elder daughter, Sasha, 20, a college student whose dreams of studying in Spain were interrupted by war, forcing her into a parental role when the family escaped to Lviv.

"It's really difficult," Sasha said. "I started helping my mom more with the kids. I was looking forward to maybe going to university abroad but . . ."

Sasha's voice broke and tears streamed down her cheeks. She wiped them off as her mom gave her a hug.

"I can't leave them now," Sasha said through sobs. "So we'll go back home and then we'll see."

Lviv, which has seen only sporadic Russian attacks, has become a haven for civilians, diplomats, journalists and aid groups because of its relative safety and proximity to the Polish border. Residents here have opened their homes to strangers, sheltering displaced compatriots in their living rooms and basements. Volunteers at the train depot direct new arrivals to services and housing. Shops, cafes and churches are open.

The calm is a welcome luxury for families fleeing bombardment, but one that also brings a sense of guilt. Returning to Kyiv, many said, would make them feel a little closer to the front lines.

"The good side will always win, so we're going back to Kyiv to fight on that side," said Volodymyr Ushakov, 35, an event director who said he's been working with online networks in the "cyberwar" countering Russian propaganda.

Anton Bobryshev and Sasha Pomazan, a couple in their mid-20s waiting on the platform, said they used to marvel at accounts from World War II and the 1930s Holodomor - the intentional starvation of millions of Ukrainians under Soviet dictator Joseph Stalin - in which people who had fled returned to help others.

"We watched all these films regarding wars years ago, thinking, 'Why are people coming back? It's dangerous,' " Pomazan said. "And now we understand why. Because it's our home, it's our place."

The couple said they had tried to settle into their hotel in Lviv but couldn't stop thinking of all they'd left behind in Kyiv. Family. Friends. Their pet tarantula. A brand-new Honda Accord. Pomazan's brother is an emergency medic who stayed in the capital to treat people wounded in Russian strikes. Worried about her brother, her parents also stayed in place, just nine miles from the suburb of Bucha, which occupying Russian forces turned into a slaughterhouse.

"It's a very horrible feeling when you understand your parents might be killed," Pomazan said.

Bobryshev's parents, meanwhile, have stubbornly refused to leave Zaporizhzhia, home to a humanitarian operation for families coming out of the devastated southern port city of Mariupol. His parents' daily reality is so different from theirs in Lviv, he said, that it's hard not to feel the pressure to return.

"We had a very tasty dinner here yesterday, sitting in a cafe, drinking wine, and somebody in Mariupol is dying," Pomazan said. "For us, we can forget about it for 15 minutes, for half an hour, and then we start to remember and the guilty feeling starts to kill you."

As boarding began, not everyone on the platform left. Nadia Kobryn, 45, watched her friend board the train, take a seat and wave to her from the window. Kobryn had planned to leave, too, she said, but lost her nerve with reports of new airstrikes that morning.

Train 750L, its cars painted in the national colors of blue and yellow, started down the tracks, carrying its anxious passengers back to unknown futures. Kobryn said that, deep down, she wished she and her family were on board.