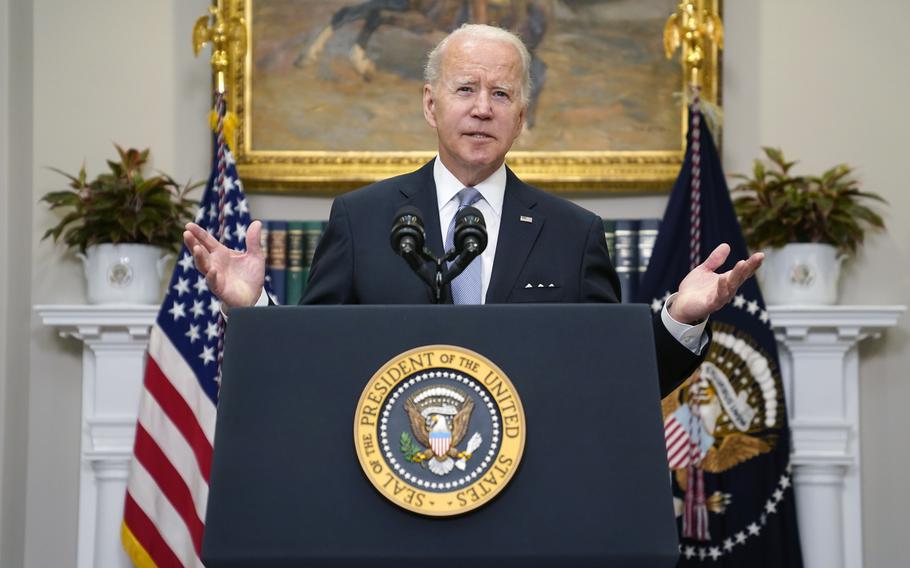 President Joe Biden delivers remarks on the Russian invasion of Ukraine, in the Roosevelt Room of the White House, Thursday, April 21, 2022, in Washington. (Evan Vucci/AP)

The Biden administration announced plans Thursday to expedite the arrival of Ukrainian refugees, creating a new system that will allow ordinary citizens and organizations such as churches to sponsor them and warning that Ukrainians attempting to cross via Mexico will be denied entry starting next week.

The announcement comes as more than 5 million people, upward of 10% of Ukraine’s population, have fled to Poland, Romania and other neighboring countries, intensifying calls for the Biden administration to admit more into the United States. The administration is also anxious to control the fast-rising number of refugees from Ukraine and Latin America showing up unannounced at the Mexican border seeking entry to the U.S.

President Joe Biden pledged a month ago to accept up to 100,000 Ukrainians, but the administration has not offered clear guidance on the process until now. Left to their own devices, approximately 15,000 Ukrainians have arrived mostly at the U.S.-Mexico border over the last three months, senior administration officials said in a conference call with reporters Thursday, speaking on condition of anonymity to discuss the new program.

The State Department and the Department of Homeland Security said they are creating a new “streamlined” program called “Uniting for Ukraine” that will grant most refugees “humanitarian parole” to come to the United States for up to two years, as long as they have a sponsor willing to support them in this country. Officials also plan to expand permanent legal pathways under the existing refugee program.

“We are proud to deliver on President Biden’s commitment to welcome 100,000 Ukrainians and others fleeing Russian aggression to the United States,” Homeland Security Secretary Alejandro Mayorkas said in a statement. “DHS will continue to provide relief to the Ukrainian people, while supporting our European allies who have shouldered so much as the result of Russia’s brutal invasion of Ukraine.”

Homeland Security and Department of State officials said the main way they expect to admit refugees is via “humanitarian parole,” a temporary program that would let Ukrainians who fled the war live and work in the United States for up to two years.

Ukrainians cannot apply for the program. Instead, starting April 25, “U.S.-based individuals and entities” such as churches may apply online to the DHS to sponsor Ukrainian citizens.

Ukrainians must have been residents of Ukraine as of Feb. 11, just before the Feb. 24 invasion. They also must have a sponsor in the United States, including “any U.S. citizen, or individual, including representatives of non-government organizations,” and they will be required to pass background checks to prevent exploitation and declare that they will support the refugees financially.

Refugees also must submit to required vaccinations and clear background checks to come to the United States, and said they are working with countries in Europe to make sure Ukrainians have access to vaccines.

Once approved, Ukrainians will be given permission to travel to the United States and be considered for parole, on a case-by-case basis, for up to two years, and allowed to apply for work authorization, officials said.

Officials said organizations such as Welcome.US, an effort led by former presidents Barack Obama, a Democrat, and George W. Bush, a Republican, to aid refugees, are expected to help in the effort, along with a number of Ukrainian American civic and church groups and ordinary citizens.

Most refugees are expected to have family in the United States, officials said. More than 1 million people of Ukrainian descent live in the United States, mostly U.S.-born citizens, as well as 355,000 immigrants. Significant numbers reside in New York, California, Pennsylvania, New Jersey, Florida, Washington state and Illinois, according to the Census. Some arrived before the Soviet Union dissolved in 1991, and others after Ukraine voted for independence that year.

While officials expect most Ukrainians to enter the United States via humanitarian parole, which is the temporary route, they said they are also expanding efforts to create permanent pathways, including for “vulnerable populations” such as women and girls, children, and older people with special needs.

For instance, the State Department will expand access to the traditional U.S. Refugee Admissions Program operations in Europe “to the extent possible” to offer Ukrainians more appointments for visa processing and granting priority access to people with “humanitarian, medical, or other extraordinary circumstances.”

They are also expanding refugee resettlement processing under the Lautenberg program, a route for historically persecuted religious groups from Ukraine and other former Soviet republics to reunite with relatives in the United States. Approximately 18,000 people were in that program in Ukraine and officials said Thursday that they are working to identify those who fled so that they can come to the United States.

The new program comes as the war in Ukraine is nearing the two-month mark and the United States is contending with rising numbers of migrants from Latin America at the U.S.-Mexico border. Mayorkas and Secretary of State Antony Blinken attended a migration summit in Panama this week to address the border influx, which is expected to rise even more after May 23, when a public health order known as Title 42 that allowed border officers to expel migrants is set to expire.

But lawmakers and advocacy groups have also pressured the Biden administration to expand access to Ukrainian refugees, amid horrifying reports of destruction and death in that country. The United States said it has contributed nearly $300 million in humanitarian aid such as food and shelter to displaced Ukrainians and is prepared to offer more than $1 billion.

The Biden administration has already granted temporary protection from deportation to an estimated 59,600 Ukrainian noncitizens already living inside the United States, but they must have been living here as of April 11.