The Paris prosecutor is looking into allegations that nationalist leader Marine Le Pen and several of her party members misused hundreds of thousands of euros of European Union funds between 2004 and 2017 when she was a member of the European Parliament, with just a week left before she stands in the final round of the French presidential election.

The prosecutor's office said it received a report detailing alleged abuse of funds from the European anti-fraud office OLAF on March 11 and is reviewing it.

Le Pen's lawyer, Rodolphe Bosselut, denied any wrongdoing in an interview with BFM TV. A spokesman for Le Pen wasn't immediately able to comment. French investigative outlet Mediapart first unveiled the existence of the OLAF report on Saturday. Le Pen is set to face President Emmanuel Macron in the election runoff on April 24.

According to Mediapart, several political expenses claimed by Le Pen and others in her party were "fictitious." They include promotional gear for a conference in 2014, payments to various contractors and organizations, personal wine purchases and funding for other party events unrelated to parliamentary responsibilities.

A spokesperson for OLAF said the agency finalized its investigation in September 2021 with recommendations and sent its final report to the European Parliament and to French and Belgian judicial authorities. The probe involved several persons, both natural persons and economic operators. The spokesperson added that "final case reports are not made public by OLAF."

Polls point to a victory for Macron in the final runoff ballot on April 24, and the gap between him and Le Pen has widened over the past week, according to a compilation of surveys. But it's still likely to be a much tighter race than in the 2017 election, when Macron defeated her by more than 30 percentage points. 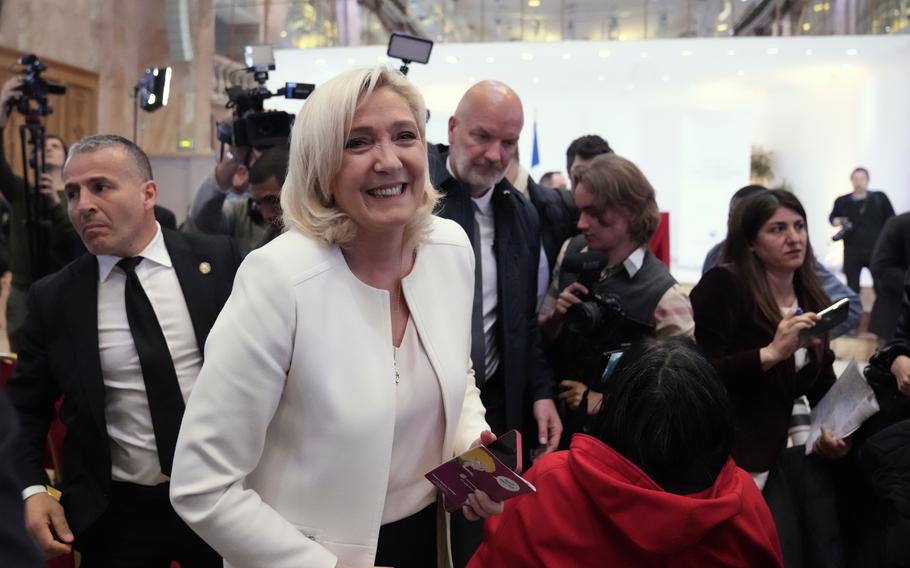