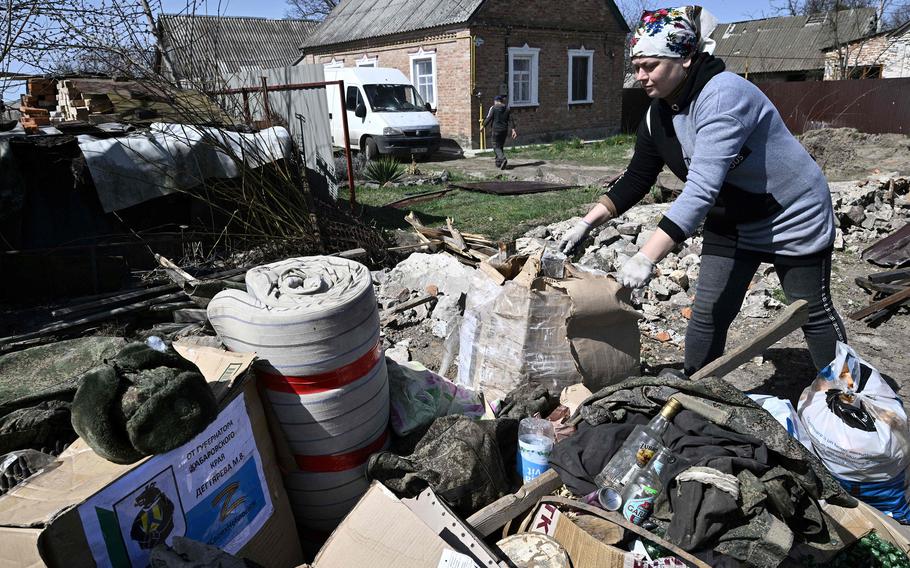 People clean houses of belongings and garbage left by Russian servicemen who stayed there, in the village of Andriivka, Kyiv region, on April 14, 2022. (Genya Savilov/AFP/Getty Images/TNS)

As Russian forces shift their military focus to the east, some Ukrainians who fled their homes early in the invasion are venturing back to see what’s left of their lives and whether they can start to rebuild.

Daryna Tarasenko, a 27-year-old portrait photographer who abandoned her Kyiv apartment on the day of the Feb. 24 attack, returned last week after spending a month in a Romanian border town to find her home undamaged.

“The main reason was homesickness,” Tarasenko said by phone after traveling more than 430 miles back to the capital with her husband and dog. “I even missed my dishes at home.”

Seven weeks after President Vladimir Putin’s tanks stormed across Ukraine’s borders, more than 4.6 million people have fled abroad and well over 10 million have sought refuge in the nation’s more secure cities and towns. Migration experts are calling it the most dramatic movement of people since World War II.

While the overall exodus is climbing at a slower pace, and fresh refugees are fleeing the intensifying assault on the eastern Donbas region, more and more Ukrainians are returning to areas where they think they can hold out — from within and outside the country.

The number of those crossing back over the Ukrainian border has tripled to about 30,000 a day, Andriy Demchenko, a spokesman for the State Border Guard Service, said in a briefing on Tuesday. That figure includes a higher number of the elderly and women and children, in contrast to the first days of the war when counter-migration was mostly men heading home to join the fight.

More than 870,000 Ukrainians have made the trek back home overall, the United Nations Office for the Coordination of Humanitarian Affairs said on Thursday.

Kyiv, the capital whose pre-war population was 2.9 million — and Putin’s primary target at the outset — has remained largely intact.

The worst damage was in towns surrounding the city, where Russian troops left a path of destruction, including hundreds of people apparently massacred, as they withdrew to the north. Local authorities are cautioning against returning to those areas, citing the risk of booby traps and unexploded ordnance, as well as a resumption of Russian air-strikes or missile attacks.

Karina Patsiomkina, an activist who spent the first weeks of the war with friends in Kyiv and in the western Ukrainian city of Lviv, defied the warnings to return to her home in Bucha, the settlement west of the capital where authorities found Russian troops had left the streets strewn with corpses, triggering accusations of war crimes. There, the destruction is complete, and those whose houses are still standing have no electricity, gas or other services.

“I sleep under two blankets and I light my room with a candle,” Patsiomkina said in a interview on a weak Telegram connection. It was the second time she’d fled. In 2020, she left Belarus because of a political crackdown there by President Alexander Lukashenko, only to confront the full-scale invasion in February, this time by Putin’s forces.

A return to Bucha isn’t for everybody. Many make their way from Kyiv — once an hour-long journey that now takes a day because of damaged roads and traffic jams at check points — to check their homes and then leave again, Patsiomkina says. Many still live in underground shelters, their houses destroyed.

Such cases remain the exception. Poland, which is hosting the vast majority of Ukrainian refugees, is still registering a net influx.

Many refugees are considering a return, especially for the upcoming Eastern Orthodox Easter holiday on April 24, but relatively few packed their bags.

On Ukraine’s border with Slovakia, authorities have closed one refugee camp because arrivals have slowed to 3,000, from a peak of around 14,000 in the days after the invasion.

Anna Bogacz, a volunteer who is helping war refugees at a train station in Poland’s capital, Warsaw, said the number of those seeking help to get back home is on the uptick.

“The number of people returning has increased,” Bogacz said. “About half of the people I help seek assistance in returning to Ukraine.”

With Putin this week dousing hopes of a diplomatic settlement and vowing to continue the war, nobody is betting on an end to the conflict in the near future — making it a risky bet for those opting to wait it out at home under threat of attack.

But for people like Tarasenko in Kyiv, finding her apartment intact was worth the return. Clients are even booking photo sessions with her as late as August, she said. On coming home, she thought she’d left a light on, only to find that it was the sun flooding the flat. And instead of the stench of rotten food, she found the scent of fresh linen — a load of wash she’d hung to dry before her frantic escape.