How one Ukrainian village survived the terror of Russian occupation Pavlo Prykhodko stands by his father’s grave in the backyard of his parent’s home in Vorzel, Ukraine, on April 13, 2022. (Heidi levine for The Washington Post)

VORZEL, Ukraine - The power was out, the faucets were dry and the Russians were drawing near when Victor Prykhodko's neighbors came to him for help.

Prykhodko flung open his cellar doors, his son Pavlo said, doling out water from his well and warming 20 people with his wood-burning stove at his home in Vorzel, a village outside Kyiv.

"He did what was necessary," Pavlo Prykhodko said of his father's decision to shelter his neighbors in late February. "They said that without my father, they wouldn't have survived."

The towering 65-year-old had a good heart but bad knees, his son remembered. So Prykhodko could not run when a Russian armored vehicle opened fire as he stopped to chat with neighbors on March 6. He was killed a few steps from his front door on Kvitkova Street, his son said, his body left in the road for two days out of fear that anyone who moved it would also be shot.

The terror of a military occupation and quiet moments of mercy among neighbors underpinned daily life for weeks in Vorzel, a suburb surrounded by birch forests that is home to a few thousand people. Now its residents are emerging from their homes and picking up the pieces after Russian troops withdrew this month, leaving behind a trail of wreckage.

Lyudmyla Ryzhenko, a deputy member of the village council, said the Russian occupation was marked by theft and violence. Four people were killed in the shelling of a residential street, she said, and buried nearby. Soldiers would confiscate phones and laptops from people's homes, and stole cars when their own vehicles ran out of fuel. Once those cars were also out of gas, the soldiers took bicycles.

After the Russians withdrew, Ryzhenko's father collected the bicycles one by one so they could be picked up by their owners. When an apartment building was shelled on March 17, residents formed a bucket brigade to the fifth floor to put out the fire. In the absence of government services, people here learned to rely on one another. 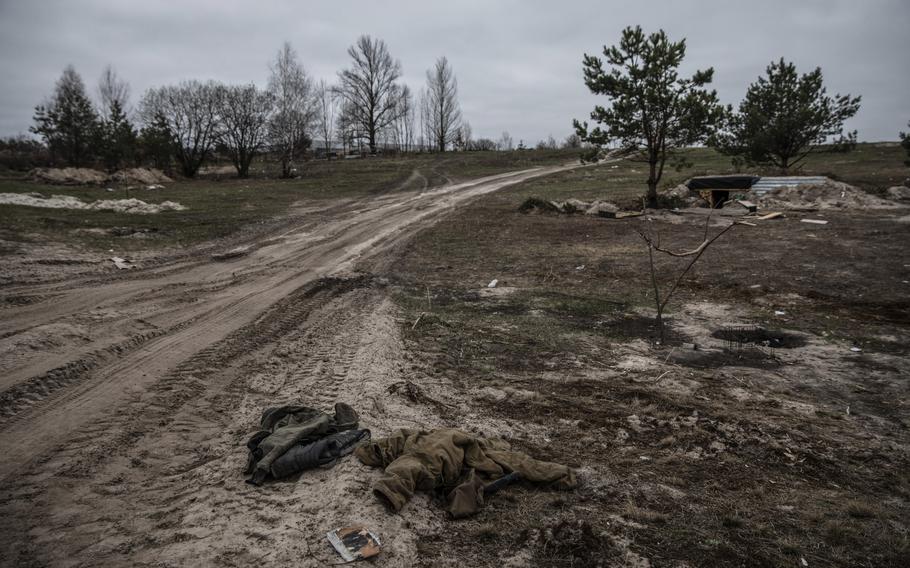 A Russian uniform lies in an area where Moscow’s forces set up a large camp on the outskirts of Vorzel. (Heidi Levine for The Washington Post )

A nearby evangelical church has become a temporary home for about 50 sick and disabled people displaced by the war. Inside the church, veiled in darkness on another cold evening without electricity, the residents hobbled out on canes to chat and lingered near the makeshift kitchen to collect hot tea from volunteers. Julia Gunko spooned out stuffed cabbage for an 87-year-old woman struggling to stand.

Her work done, Gunko stepped outside. She sat on a bench and quietly described the moment a Russian soldier tried to rape her.

"He arrived at my home armed with his weapon, in uniform, and demanded I follow him outside toward a shed," she said. "I pushed him away and told him that he would have to shoot me first in the head and only then could he do what he wants with my body."

Gunko's dog appeared to scare him away, she said, and she hid in a friend's basement for days, terrified that at 37 she was one of the youngest women left in town after many others had fled. She watched with relief when she saw the soldier depart with his unit late last month.

"I suppose I am lucky," she said. "My neighbor was found tortured in his basement, and another was shot by a sniper and buried in the yard of his home."

Other townspeople rarely ventured out. Maryna Khrystiuk, 58, stayed in her house most of the time, peering through a window that allowed her to count armored vehicles heading to nearby Irpin, where the Russians suffered heavy losses. 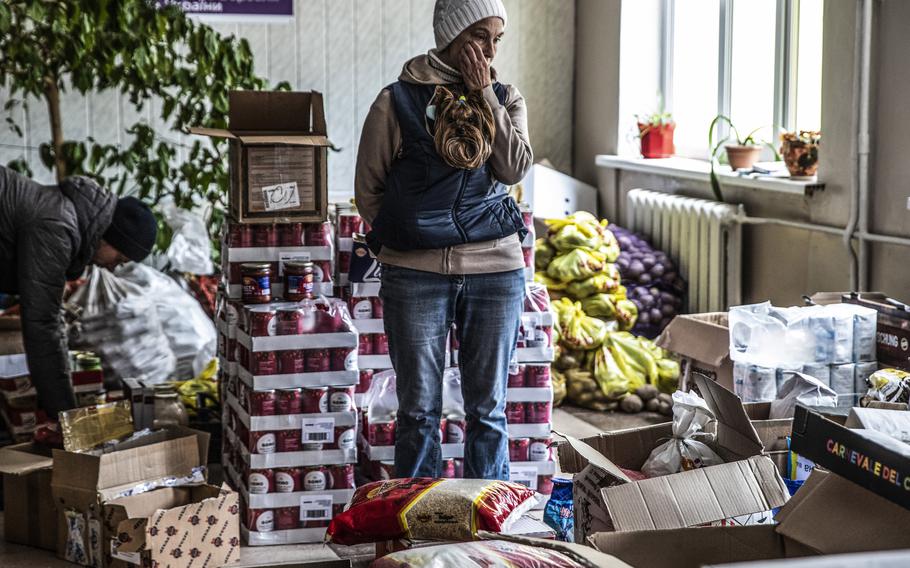 Vorzel resident Larissa Shudeva, carrying her dog, pauses in her volunteer work sorting food and clothing donations at a school. (Heidi Levine for The Washington Post )

Russian forces camped in a vast, rolling field on the outskirts of town, spreading out improvised shelters made from felled trees, pallets, black plastic wrap and cardboard boxes. There was even a sauna built with plywood and sheet metal. Before retreating, Russian forces carved up the land with heavy machinery to build artillery firing positions. All that's left now are empty wooden munitions boxes, some with stapled paperwork dating the weapons to the Soviet era.

A group of men from the village arrived to discard more refuse at the site, and to retrieve a bit of recompense. Russian shelling put a hole in his roof, one man said, so he came to the Russian ghost camp to find lumber to fix it.

Word of Prykhodko's effort to protect his neighbors spread throughout Vorzel, where he was a respected member of the community. He served in the Soviet navy, his son said, and returned to Vorzel to build garages, buildings and a few homes.

His death rattled the village. Neighbors kept watch through windows to ensure that his body wasn't booby-trapped by Russian soldiers. After two days, it was decided that moving Prykhodko's body was worth the risk.

The retrieval was a fitting tribute. A few of the people who had sheltered in his cellar organized a working party to gather his remains and take them back down Kvitkova Street. They buried Prykhodko in his backyard, shaded by the house he had built.

The Washington Post's Serhii Korolchuk contributed to this report.