Russia resumes attacks on Kyiv after its most important warship sinks 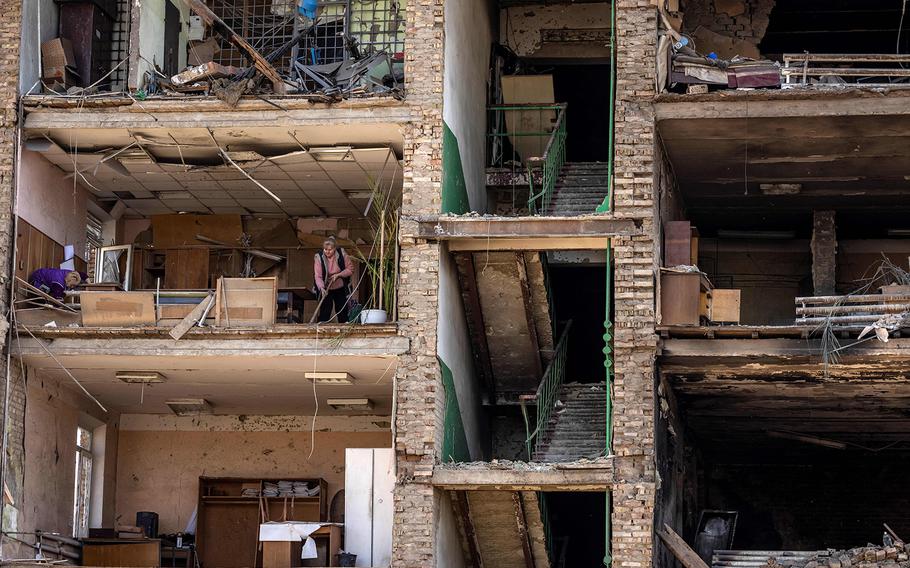 Women clean in a building with a collapsed facade at the Vizar company military-industrial complex, after the site was hit by overnight Russian strikes, in the town of Vyshneve, southwestern suburbs of Kyiv, on April 15, 2022. (Fadel Senna/AFP via Getty Images/TNS)

SEVERODONETSK, Ukraine — Thunderous blasts echoed in the capital, Kyiv, and in Ukraine's eastern battle zone on Friday, a day after Russia's most important warship in the Black Sea sank while being towed to port, marking a humiliating wartime setback for Moscow.

Russia's defense ministry threatened stepped-up missile attacks after its flagship missile cruiser Moskva went down Thursday following what Ukraine and the United States said was a missile strike and what Moscow claimed was an accidental fire aboard.

The Russian defense ministry said Friday that in Kyiv, a plant that made and repaired Ukrainian missiles was targeted. The capital, which was heavily bombarded at the outset of the war, had enjoyed a period of relative calm after Russian forces broke off an offensive in Ukraine's north at the beginning of this month.

Departing Russian troops, however, left behind thousands of land mines and evidence of mass atrocities committed during a monthlong occupation of some of Kyiv's satellite towns and suburbs. Western governments have cited accounts of rape and execution-style killings of hundreds of civilians in accusing Russia of war crimes.

Elsewhere, fighting grew fiercer. Powerful explosions were heard Friday in Kramatorsk, in Ukraine's east, Kherson in the south, and in the northeastern city of Kharkiv, in advance of an expected major Russian onslaught in the industrial eastern heartland known as the Donbas. A Ukrainian official said that seven people were killed and dozens were wounded in a Russian strike Thursday on buses ferrying civilians out of the war-torn east. 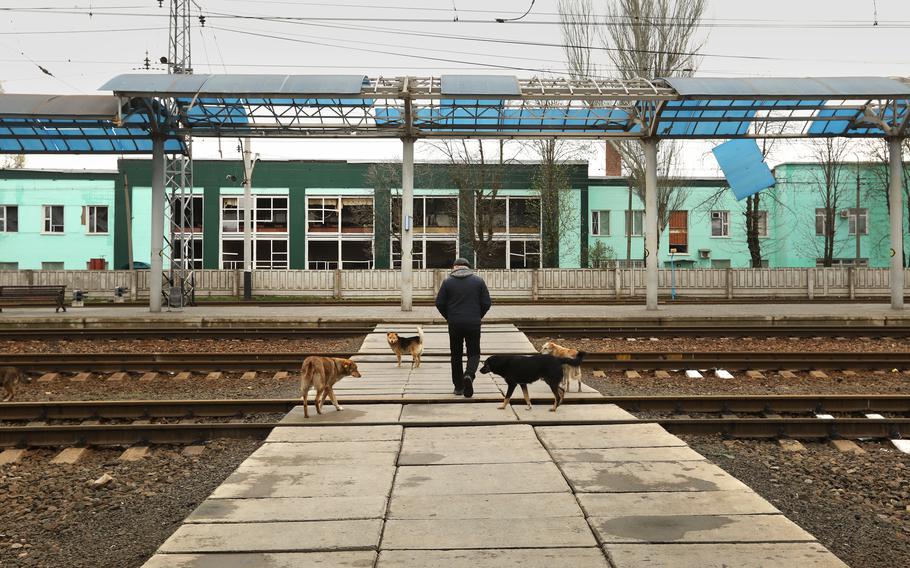 On April 14, 2022, the train station in Slavyansk, Ukraine, is closed after a Russian missile attack that killed 57 people in the nearby train station in Kramatorsk. (Carolyn Cole/Los Angeles Times/TNS)

Intensifying bombardment also hit Severodonetsk, in the eastern Luhansk region. In the small city, with a prewar population of about 100,000, streets emptied amid a thunderclap of strikes.

At the city hospital, an older woman lay on a hospital bed, nearly motionless, but with her eyes open. An elderly man sitting by her side said a shell had fallen near her nine days earlier.

By Friday, the fight for the city centered on pitched street battles around a giant metallurgy plant and the port area, said Ukraine's defense ministry spokesman, Oleksandr Motuzyanyk. Mariupol has been under Russian attack since the earliest days of the war, and municipal authorities say more than 20,000 civilians have died — a figure that could not be independently verified. The head of the U.N. World Food Program warned that civilians in the city are being "starved to death," and predicted the humanitarian crisis will worsen in the coming weeks.

Ukraine said outgunned defenders were still holding on in Mariupol, which Moscow is determined to capture in order to create a land bridge between Russian-controlled territory and the Crimean Peninsula, seized by Russia in 2014. But analysts predicted the city's fall could be near.

Ukrainian President Volodymyr Zelenskyy, in his overnight address to the nation, praised Ukrainian defenders' perseverance and courage as the war entered its eighth week — an invasion the Ukrainian leader described as "absurd" and "suicidal."

He also mocked the loss of the Moskva, without referring to the flagship by name, declaring that Ukrainian forces had shown by their actions that Russian warships go "to the bottom only."

The Ukrainian defense minister, Oleksii Reznikov, also taunted Russia over the sinking, tweeting that "we have one more diving spot in the Black Sea now."

The 12,500-ton warship, which was named for Russia's capital and which had the capacity to carry long-range cruise missiles, sank while it was being towed to port Thursday after it was damaged under circumstances that are still in dispute. Ukrainian officials claim their forces struck the ship — an assertion backed by a senior U.S. defense official Friday, who said the Moskva "was struck by two Ukrainian Neptune missiles." Russia has acknowledged that there was a fire on board, but not an attack. 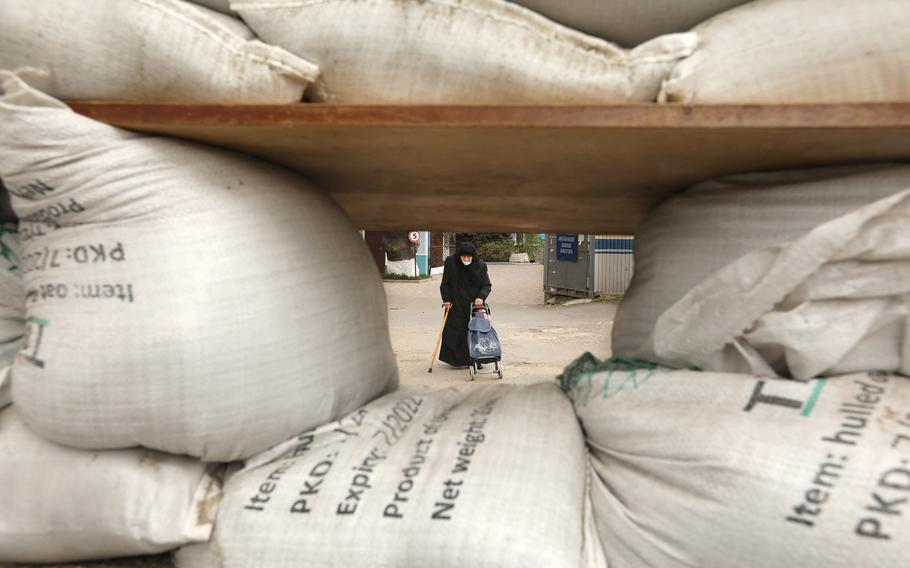 An elderly woman walks by sand bags set up for protection in Odesa, on April 12, 2022. Many of those left behind in the war are elderly people. (Carolyn Cole/Los Angeles Times/TNS)

The ship's loss will likely force changes in how the Russian navy operates in the Black Sea, a major staging ground for Moscow's expected offensive in Ukraine's east and its southern seacoasts, analysts said. In an assessment Friday, British military intelligence said the Moskva had served a crucial role as command vessel and air defense node.

Combined with Ukraine's attack in late March on the landing ship Saratov, Russia "has now suffered damage to two key naval assets" since the Feb. 24 invasion, the British assessment said, adding that those two episodes "will likely lead Russia to review its maritime posture in the Black Sea."

However, a Washington think tank, the Institute for the Study of War, said in its latest analysis that while the Moskva's loss will reduce Russia's ability to conduct cruise missile strikes, it is "unlikely to deal a decisive blow to Russian operations as a whole."

Other Russian vessels have swiftly moved away from the southern Ukraine coastline, at least for now, Western military officials said. But the Pentagon said that on land, dozens of Russian battalion tactical groups are in place for the expected eastern offensive.

Zelenskyy, in his overnight address, harkened back to the start of the invasion, which he said Russia expected to make short work of subduing Ukraine.

Marking 50 days under attack, he called the country's defense "an achievement of millions of Ukrainians, of everyone who on Feb. 24 made the most important decision of their life — to fight."

In vowing renewed strikes on the capital, Moscow did not cite the sinking of the Moskva — although it did acknowledge the warship's loss — but instead said it was responding to attacks on Russian territory.

"The number and scale of missile strikes against targets in Kyiv will increase in response to the Kyiv nationalist regime committing any acts of a terrorist nature or sabotage on Russian territory," defense ministry spokesman Igor Konashenkov said, according to the RIA news agency.

Russian authorities on Thursday had accused Ukraine of a cross-border helicopter attack on residential buildings in the village of Klimovo, in Russia's Bryansk region.

Speaking on the BBC, former CIA Director David Petraeus described Russia's admission that the ship sank as a "rare moment of truth," but said facts surrounding the vessel's loss would have "come out" eventually.

Bulos reported from Severodonetsk, King from Warsaw and Linthicum from Mexico City. Anumita Kaur in Washington contributed to this report.