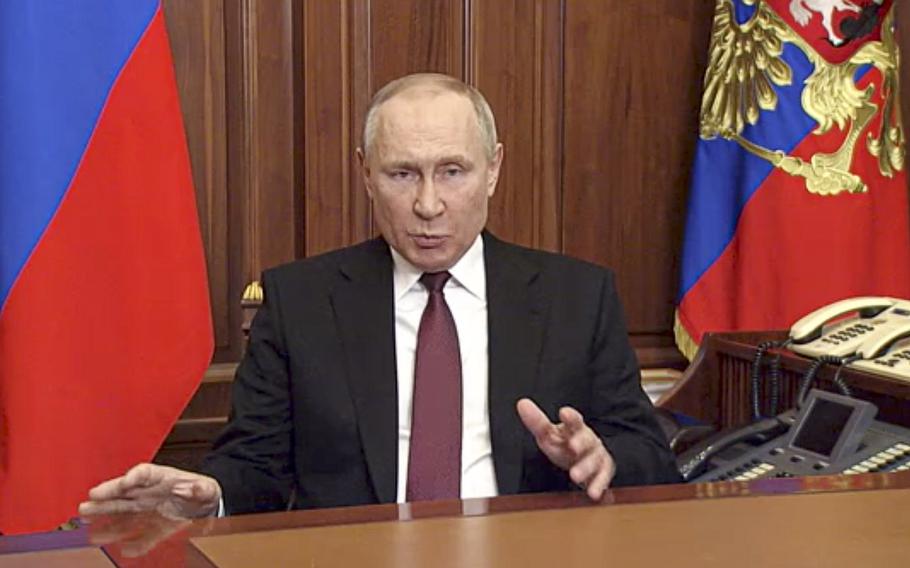 Russia broke international humanitarian law by deliberately targeting civilians during its invasion of Ukraine, and those who ordered attacks on a maternity hospital and theater turned shelter in the besieged city of Mariupol committed war crimes, experts from the Organization for Security and Cooperation in Europe determined in a fact-finding report published Wednesday.

“Taken as a whole, the report documents the catalogue of inhumanity perpetrated by Russia’s forces in Ukraine,” Michael Carpenter, U.S. ambassador to the OSCE, said in a speech Wednesday. “This includes evidence of direct targeting of civilians, attacks on medical facilities, rape, executions, looting, and forced deportation of civilians to Russia.”

The report concluded that the airstrike that tore through a maternity hospital in Mariupol was a Russian attack. “Based upon Russian explanations, the attack must have been deliberate,” the report said of the March 9 assault on the Mariupol Maternity House and Children’s Hospital. “No effective warning was given and no time-limit set. This attack therefore constitutes a clear violation of International Humanitarian Law and those responsible for it have committed a war crime.”

While the Russian government alleged that the hospital was used for military purposes, Carpenter said, “the mission categorically dismissed these claims.” The OSCE experts did not travel to Ukraine but sorted through evidence from numerous sources, including open-source material and accounts from human rights and nonprofit groups.

The OSCE report also found that the attack on the Mariupol Drama Theater, where hundreds of civilians were sheltering as the building was reduced to rubble, “was most likely an egregious violation of international humanitarian law and those who ordered or executed it committed a war crime.”

Overall, the investigation found “clear patterns of international humanitarian law violations by the Russian forces in their conduct of hostilities,” the report said.

However, it added that while the report “was able to contribute to a first collection and analysis of facts, more detailed investigations are necessary, in particular with regard to establish individual criminal responsibility for war crimes.”

The report tracked alleged abuses from Feb. 24, the day Russia invaded, to April 1. It did not include a missile strike last week on a train station in the eastern city of Kramatorsk that killed more than 50 people, including children, or atrocities recently reported in Bucha, a suburb of the capital, Kyiv.

The 110-page report also found “credible evidence suggesting that such violations concerning even the most fundamental human rights . . . have been committed, mostly in the areas under the effective control of Russia.”

The OSCE began its investigation last month after a vote by most of its member states, including Ukraine, to pursue a fact-finding mission. The United States is part of the 57-member body - as are Russia and its ally, Belarus. Russia and Belarus were among a dozen countries that did not vote for the review and have yet to publicly comment on the report.

The OSCE investigation was triggered through a vote on the “Moscow Mechanism,” named for a 1991 conference held in the Russian capital, that allows member states to send independent experts on missions to another member state to resolve issues of “human rights and democracy,” according to the OSCE.

Carpenter said the OSCE would share its findings with the International Criminal Court, national courts and others that have jurisdiction over alleged war crimes and crimes against humanity.

Ukrainian officials have said that hundreds of civilians were summarily executed in Bucha and that they had evidence of torture, dismemberment and the shooting of people at close range. The alleged events in Bucha - found as Ukraine recaptured more territory and Russia’s forces began pivoting from areas near Kyiv to the east and south of the country - led to Russia’s suspension from the U.N. Human Rights Council. Russia has claimed that such killings were “staged” or “fake.”

The OSCE report found that the events in Bucha deserve “a serious international enquiry, on the spot, with forensic experts,” and said “evidence points to a major war crime and a crime against humanity committed by the Russian forces” in the town northwest of Kyiv.

Carpenter said that since the crimes were likely carried out before the OSCE team’s mandate ended on April 1 - though the evidence came to light afterward - the OSCE should still have jurisdiction and “there will need to be follow-on investigations.”

International Criminal Court Prosecutor Karim Khan called Ukraine a “crime scene” on Wednesday during a visit to Bucha, as his team collected evidence.

“This report is just the first of likely many,” said the United Kingdom’s ambassador to the OSCE, Neil Bush. “We must, as an international community, hold accountable those responsible for the atrocities that have been committed in Ukraine, including military commanders and other individuals in the Putin regime.”

The report by the OSCE Office for Democratic Institutions and Human Rights also said women and children have been hit particularly hard by Russia’s abuses. The body also noted Ukraine’s role in allegations of abuse and treatment of prisoners of war. “The violations committed by the Russian Federation, however, are by far larger in nature and scale,” it said.

President Joe Biden on Tuesday referred to the killings in Ukraine as a sign that Russia was committing “genocide,” a term previously avoided by U.S. officials. He later told reporters he intentionally used the word in his speech, although he added that he would “let the lawyers decide internationally whether or not it qualifies.” But he said, “It sure seems that way to me.”

Detailing findings of the OSCE’s report, Carpenter, the U.S. ambassador, told reporters Wednesday that making a determination about genocide was outside of the scope of the OSCE fact-finding team’s mission.

But he said “President Biden was very clear, calling the events in Ukraine genocide, due to increasing evidence that President Putin is trying to wipe out the idea of being able to be Ukrainian.”

“This desire to destroy the Ukrainian people has been seen in the horrific images of Russia’s barbaric treatment of civilians and in areas that were previously under Russian control,” Carpenter said. “It’s also evidenced in the speeches of Russian leaders and press articles appearing in the Russian media that deny Ukraine the right to exist as an independent state.”

Carpenter repeated Biden’s assertion that international law experts would need to determine whether Russia’s actions meet the legal definition of genocide spelled out by the 1948 international convention on genocide.

“A legal review based on meticulous collection of evidence is underway,” he said. “That’s going to take some time to be completed, but in the meantime, the president has made a very clear moral determination on this issue.”

The war in Ukraine has gone on for more than seven weeks, with 1,892 people killed and 2,558 injured, according to an incomplete count by the United Nations. Ukrainian officials have said the real civilian death toll is many thousands higher. About 4.6 million people have fled the country as refugees.

Russian President Vladimir Putin on Tuesday called the war a “tragedy” but insisted that Russia had “no choice” but to invade its western neighbor. He told reporters the “special military operation” in Ukraine was going as planned and would continue until its goals are met.

The Moscow Mechanism has been used nine times before by the OSCE, first in Croatia and Bosnia-Herzegovina in 1992. It was invoked most recently in Belarus in 2020, when 17 member states called for an investigation into alleged human rights abuses there.

The United States, Germany, Britain and France were among the member states that invoked the mechanism last month. Earlier in April, Ukrainian Foreign Minister Dmytro Kuleba called for Russia to be suspended from the OSCE for its “unjustified aggression.”

Carpenter did not rule out the possibility of the U.S. and allies re-invoking the Moscow Mechanism to continue to probe alleged war crimes in Ukraine.