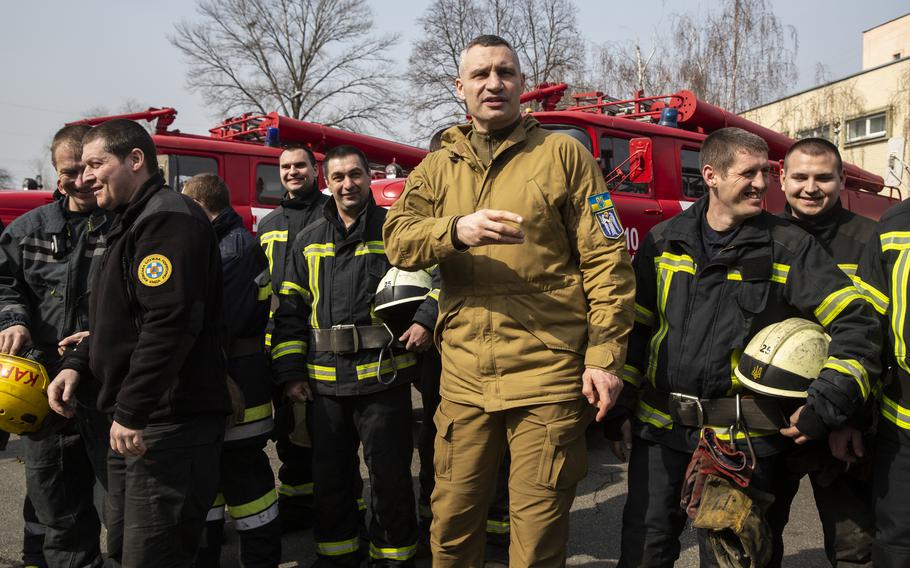 KYIV, Ukraine — The black SUV pulled up to a scene of ruin: A badly damaged apartment building. A crushed tram car. Blood coating the sidewalk.

Just about an hour earlier, a suspected Russian strike had hit this residential area in the Ukrainian capital. Vitali Klitschko stepped out of his vehicle and ducked under the red and white tape keeping civilians away from the scene. For a wartime mayor in a city under siege, it was an all-too-familiar stop.

A decade ago, Klitschko was best known as a boxer and heavyweight world champion. His nickname was Dr. Ironfist — a nod to both his doctorate in sports science and his hands the size of dinner plates.

Now he has emerged as an outsize figure in Russia’s war in Ukraine. For more than six weeks, his city has withstood the imminent threat of Russian takeover, with him — standing 6 feet 7 inches tall — at its helm.

While Ukrainian President Volodymyr Zelensky, an actor turned politician, has been hailed worldwide for refusing to leave the capital, it is Klitschko who has been far more visible on Kyiv’s transformed and barricaded streets.

As Russian forces encroached on the capital, the mayor visited scenes of attacks right after they occurred. He comforted survivors and greeted first responders. He was a guest at a Territorial Defense Forces checkpoint wedding. He broadcast his trips around the city on Instagram, expressing rage over Russian assaults on civilians. On a visit to the suburb of Bucha just days after its liberation, as bodies still lay in the streets, he declared that what he witnessed there amounted to genocide.

“My priority as mayor of my hometown: Save the lives of citizens of our city,” he said in a recent interview. To stay put in the capital was not so much a decision, he said, but fulfillment of a “mission.”

“I am present right now, everywhere,” he said. 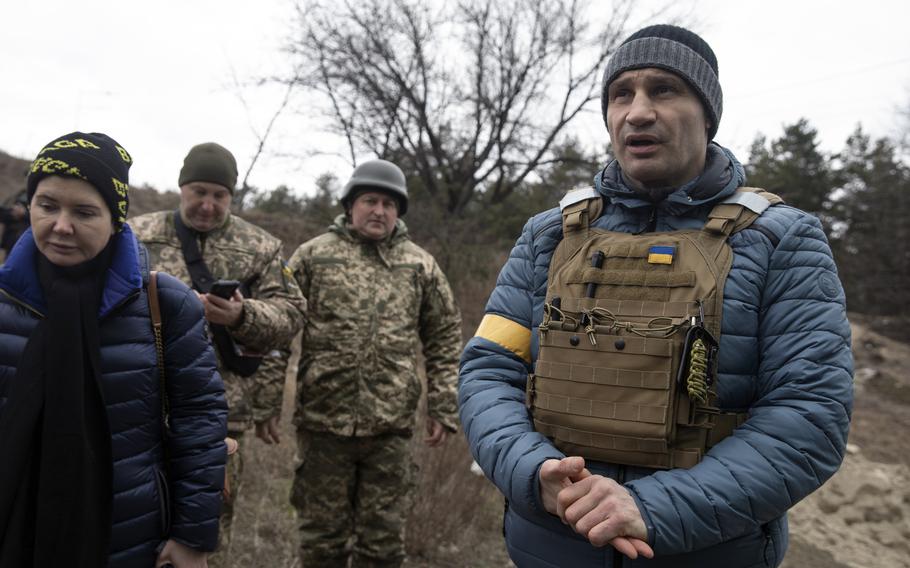 Kyiv Mayor Vitali Klitschko speaks to the media as he arrives close to the front line to attend a wedding between members of Ukraine's Territorial Defense Forces. (Heidi Levine/for The Washington Post)

That includes on social media, where his posts are part public relations campaign, his relative ease on camera indicative of his many years under bright lights in a boxing ring. Many in the capital suspect he may plan to run for president. But his consistent appearances in embattled Kyiv have also served as a unifying force for Ukrainians. Residents — even those who didn’t particularly like Klitschko’s politics before the war — say his nontraditional approach is working.

“Our president wasn’t a politician, our mayor wasn’t a politician,” said Kostya Suspitsyn, a product designer and now wartime volunteer, who was taking a break earlier this month at one of the city’s few open cafes. “It’s why we’re so strong today.”

Klitschko was born in 1971 in modern-day Kyrgyzstan to a Soviet-era air force pilot. He and his younger brother Wladimir began boxing as kids and then soared to stardom, becoming two of the world’s most renowned boxers. Yet as professionals, they never fought each other — honoring a promise they made to their mother.

Even as they secured heavyweight titles, they also pursued their educations and advanced degrees. Eventually, the elder Klitschko opted to commit to living in Kyiv and try his hand at government.

In politics, as in the boxing ring, Klitschko is known for his slight awkwardness. Even his fans acknowledge he has a tendency to lose track of his thoughts or speak in jolted, incomplete sentences. Some of his better-known misspeaks have been widely shared as mocking memes. 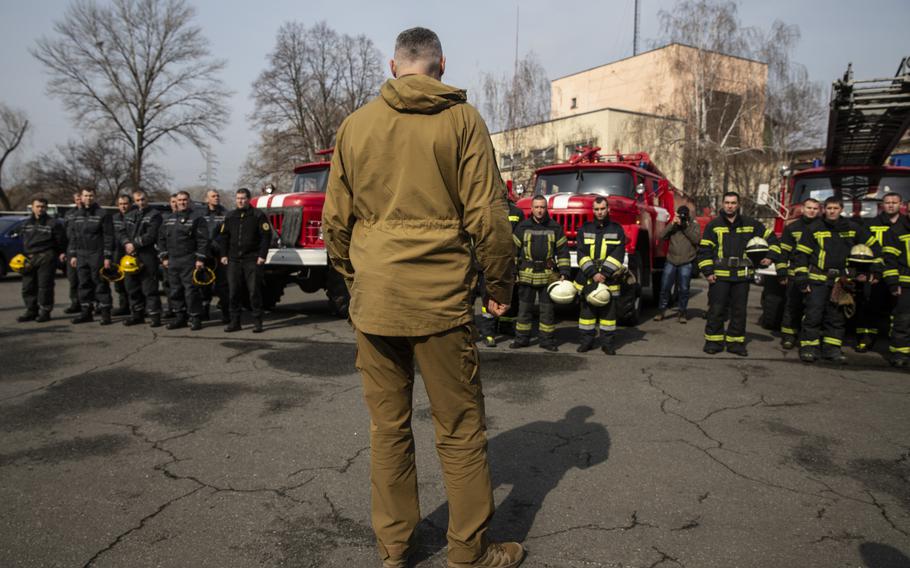 Staying put in Kyiv as Russian forces advanced last month was fulfillment of his "mission," the mayor says. (Heidi Levine/for The Washington Post)

Still, he emerged as a serious figure in Ukrainian politics, founding the Ukrainian Democratic Alliance for Reform party. In 2012, he won a seat in parliament. He formally retired from boxing in 2013 and then rose as a leader in the massive protest movement that began in response to then-President Viktor Yanukovych’s decision to turn down a European agreement and instead align with Russia. The pro-Western movement, now known as Maidan or the Revolution of Dignity, marked a turning point in Ukrainian history and spurred a reworking of the country’s political order.

Klitschko initially used the momentum to pursue a bid for president. When he dropped out to back chocolate tycoon Petro Poroshenko, he refocused his own sights on the mayor’s office. He has run Kyiv since 2014.

In February he found himself facing his biggest — and most unexpected — fight yet. Despite the warnings, he never thought a Russian invasion would happen, interpreting the buildup of troops around Ukraine’s borders this winter as little more than Russian President Vladimir Putin flexing his muscles. Then, on Feb. 24, the capital woke up to a barrage of booms.

“We did not prepare well because nobody believed in that,” he said. But once the invasion began, “we [didn’t] have another choice, we had to defend our country.”

Throughout March, the towns around Kyiv were relentlessly shelled by the advancing Russian forces. Civilians were killed. In the capital, air raid sirens wailed endlessly. By the end of the month, some 80 apartment buildings were damaged and around 100 civilians killed during the attempted siege, Klitschko said.

But the Russian troops never managed to take the city — retreating in recent days after failures that defied expectations from military experts and Western officials. Klitschko attributes the Ukrainians’ successes to a sense of duty to defend their way of life. On a recent morning, Klitschko pulled up to a fire station in the north of Kyiv. For once his brother wasn’t with him, instead traveling to Germany to push for more humanitarian and military support from the country where both lived for years.

In boxing, the two have referred to their relationship as the “secret weapon” their opponents must face. In the context of the war, that has meant rallying behind one another in the defense of the capital.

“I’m very happy my brother uses his status and international contacts” to collect money for Ukraine, Klitschko said. “My brother supports me very much.”

For some residents, that brotherly bond has also helped improve the mayor’s image. “Before the war, I didn’t have a very good opinion about him,” said Andrii Schavinskyi, a 26-year-old software developer. “But that he stayed in Kyiv and the fact his brother is supporting him makes me feel good.”

Klitschko wandered through the fire station, inspecting new equipment and greeting those responsible for putting out blazes caused by Russian strikes.

Firefighters beamed as they shook the mayor’s hand and showed him the rooms where women wove camouflage nets to cover checkpoints and civilians trained to learn first aid.

“When people in power come to people involved with fighting, it helps morale,” said Sgt. Volodymyr Taran, who has spent two years as a firefighter. “It means they aren’t forgetting the people who are saving lives.”

Outside, Klitschko posed for photos, throwing his arms around the firefighters. Some Russian forces still lingered on the outskirts of the city. In the background, the sound of outgoing artillery could be heard.

Serhii Korolchuk and Serhiy Morgunov in Kyiv contributed to this report.