What weapons to send to Ukraine? How debate shifted from helmets to tanks. 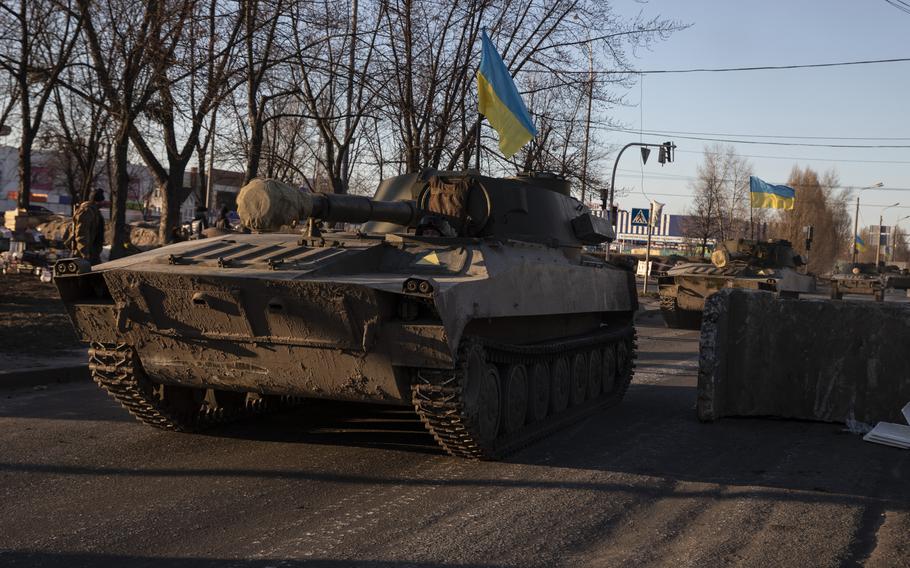 Ukrainian officials are clear on what they want from the United States and Europe: Weapons. Big heavy weapons. Not helmets. Tanks.

They say they need these weapons now, not later. And a lot of them.

The message has been broadly the same from the start of Russia's invasion, when Ukrainian President Volodymyr Zelensky reportedly said "I need ammunition, not a ride," to this past week, when Foreign Minister Dmytro Kuleba told NATO leaders in Brussels that he had a threefold agenda: "weapons, weapons, weapons."

But in the United States and Europe, the discussions over what types of weapons to send is far different than it was just six weeks ago.

This is a pivotal moment of the war, and as the battlefield shifts, the sorts of weapons Ukrainian forces need are changing, too. There is no longer a fear that the Ukrainian capital, Kyiv, could fall within days. Russian forces are repositioning for a fight over eastern Ukraine - what many predict will be full-scale confrontation on flat, open, rural terrain, between infantry, armor and artillery, in the kind of engagements not seen in generations.

This next phase could be "protracted" - "measured in months or longer," National security adviser Jake Sullivan warned at a White House briefing. It could look like something from World War II, with two large armies facing off, Kuleba told NATO foreign ministers on Thursday.

"To win such a war, we need different help than what we have been receiving before," said Ukraine's Defense Minister, Oleksii Reznikov, in a video appeal released Thursday. "We want to liberate the enemy-occupied territories as soon as possible. To do this, we need other weapons."

In the early days of fighting, NATO countries worried that the weaponry they gave to Ukraine might be quickly captured by superior Russian forces, or that Ukrainian troops did not have the time to train to use new equipment effectively, or that sending offensive weapons would escalate the conflict and enrage Russian President Vladimir Putin, who was rattling his nuclear sword.

Weapons are easier to give than take back.

But as the war has gone on, those concerns have begun to recede. Now, some NATO countries are preparing to supply Ukraine with more lethal, sophisticated, long-range and heavily armored weapons.

The question is whether those will come as fast as Ukrainian officials want - to stop Russia's advance and push out Russian troops.

During the six weeks of the war, Western governments supplied Ukraine with billions of dollars worth of weapons, including thousands of easy-to-use, shoulder-fired missile systems, which proved especially deadly in the hands of small Ukrainian commando groups, in slowing, stopping and then reversing the Russian assault on Kyiv.

These "shoot-and-scoot" launchers were decisive, according to military analysts. "We know that military assistance is having a critical impact on this conflict," Sullivan said Monday, highlighting the U.S.-produced, shoulder-fired antiaircraft Stingers and antitank Javelins that have been shipped to Ukraine.

Now, as the war pivots to the east, the numbers and types of weapons supplied by the United States and Europe will again prove critical for Ukraine. Its forces need to quickly rebuild, to replace equipment lost in six weeks of fighting and to supply the reserve units that the Ukraine military is now trying to put into the field. They also need to prepare for a new sort of war, with the ultimate aim not of not only defending cities but turning out Russian forces.

"So antitank missiles alone are not going to cut it," said Michael Kofman, research program director in the Russia Studies Program at the CNA think tank based in Washington.

Kofman estimated that Ukraine needed "hundreds" of armored combat vehicles, including tanks, and a tremendous amount of ammunition.

Reznikov ticked off a longer list: air defense systems and combat aircraft to protect citizens and Ukrainian troops from missiles and airstrikes; long-range artillery to keep Russian forces at a distance; tanks and armored vehicles to break through Russian defenses and liberate the occupied territories; and anti-ship missiles to beat back the Russian naval siege and unblock ports on the Black Sea.

Western governments have been reluctant to send such heavy weaponry. But the Czech Republic has become the first NATO country to contribute tanks, a senior Czech official confirmed to The Washington Post on Saturday, speaking on condition of anonymity to discuss a transfer that hasn't been announced officially.

"Hopefully that will start a race to who can supply more," said William Alberque, Director of Strategy, Technology, and Arms Control at the International Institute for Strategic Studies.

"It's hard to be the first one" to send tanks, "but when someone breaks the ice, it's much easier," said Margiris Abukevicius, a Lithuanian vice minister of defense who was in Washington this week to discuss military cooperation with the United States.

In the opening weeks of the war, Ukraine's backers were mostly focused on providing weapons that Ukrainian forces already knew how to use or that could be deployed with minimal training. A soldier could learn how to fire a Javelin, for instance, by watching a short video. And formerly communist countries in central and Eastern Europe could share their stockpiles of Soviet- and Russian-made equipment that integrate easily with Ukraine's existing stock.

But European defense officials told The Washington Post that their thinking about the number and types of weapons they are willing to send has evolved, as Ukrainian forces have shown the ability to fight - and have bought themselves time to train on more complicated Western-made equipment.

At the outset, "we were supplying weapons only if we knew the Ukrainians were able to operate them from the first moment. Now we are seeing more advanced weapons and a willingness to invest some time to help them use it," said Abukevicius, the Lithuanian vice minister of defense.

At NATO meetings in Brussels this past week, the focus was on getting Ukrainian forces more advanced weapons systems as quickly as possible.

"Countries indicated they are willing to go further, because we recognize that this is a new offensive, that the Russian forces are more concentrated and that more advanced weapons will be required," according to a western official at the NATO sessions.

British Defense Secretary Ben Wallace said Friday his country will be providing Ukraine with heavily armored troop carriers called Mastiffs - and that British troops will help train the Ukrainians in its operation in a neighboring countries.

More arms shipments from the United States are coming soon, Sullivan said, promising that the types of advanced weapons headed to Ukraine will be "extraordinary" and "unprecedented," though he declined to offer specifics.

For tanks and air defense, the focus remains on older systems. 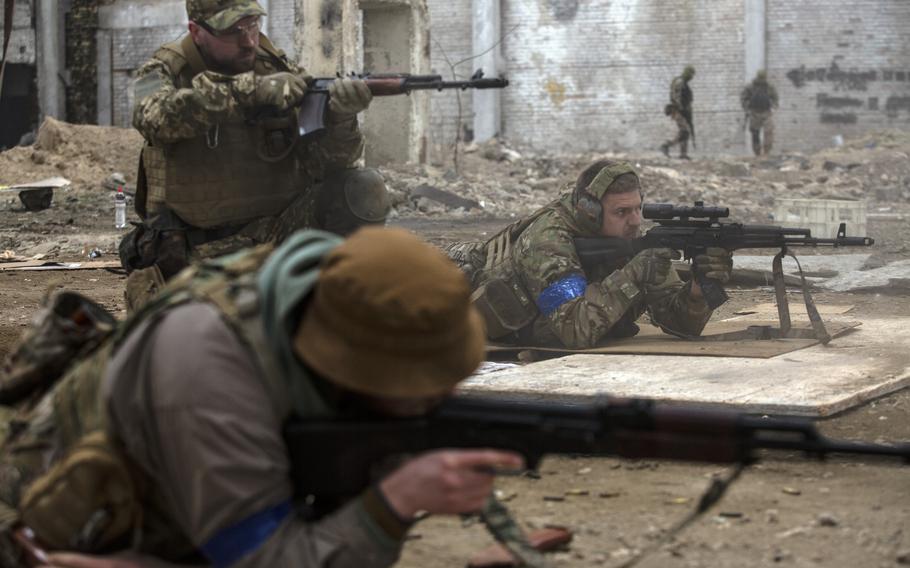 Ukrainian members of the Azov Battalion practice shooting live bullets at a training site in Kyiv, Ukraine, on March 24, 2022. (Heidi Levine for The Washington Post)

Central Europe holds warehouses of old Soviet and post Soviet tanks - the T-72s and even earlier T-64s - and Alberque said Ukrainian forces know how to drive and to fix those tanks.

In some cases, the White House has agreed to send new equipment to central European countries if those countries hand down their old equipment to Ukraine. So a steady stream of their defense officials has passed through Washington in recent weeks, seeking assurances that the United States would backfill them with more modern equipment in short order.

President Joe Biden said in a statement Friday that the United States would reposition a Patriot missile system to Slovakia, after that country sent an S-300 air defense system to Ukraine.

The debate about weaponry has evolved along with the conflict, although there remain divisions about the risks of NATO involving itself too deeply in the fight.

The Ukrainians say it no longer makes sense for western governments to debate whether arms sent to Ukraine are "defensive" or "offensive" - or might somehow "escalate" the war, which has seen dense urban centers indiscriminately shelled by Russia, alongside charges that Russian forces have committed war crimes by purposefully targeting civilians.

At the NATO meeting in Brussels this past week, the distinction between offensive and defensive weapons did appear to be falling away.

"This is about defending Ukrainian territory, therefore they need all the types of equipment that we are able to supply," a NATO official told The Post, speaking on condition of anonymity to discuss defense decisions.

"I have urged allies to provide further support of many different types of systems, both the light weapons but also heavier weapons," NATO Secretary General Jens Stoltenberg said.

But there is still wariness among Western allies. Russia has warned it will treat arms shipments to Ukraine from NATO countries as "legitimate targets" for military action, potentially setting up more direct confrontations between Russia and NATO.

At the same time, supplying Ukraine with long-range artillery, for example, includes the risk of the conflict spilling over borders.

Germany, which was chided for offering to send 5,000 protective helmets in January, has embraced the need for lethal aid, but has been reluctant to see larger, more offensive weapons sent to Ukraine. NATO countries, too, have so far agreed they will not send warplanes to the Ukrainian air force.

But backers of arming Ukraine more vigorously say that if Kyiv doesn't win now, the next battle will be with NATO anyway.

Ben Hodges, who served as commander of U.S. Army Europe during the Obama and Trump administrations, said there is a narrow window to arm Ukrainian forces as the war enters a new phase.

"The next three weeks are critical," he said, and "will determine if Ukraine can break the back of the Russian forces, or if this goes for months, maybe years."

Ukraine has expressed frustration with the speed of weapons delivery.

Reznikov warned this past week, "procrastination with the provision of weapons leads to the death of our children, to the depletion of our country."

Booth reported from London, Rauhala from Brussels and Birnbaum from Washington. David Stern in Mukachevo, Ukraine, contributed to this report.