In a Ukraine maternity ward: the roar of bombs, a newborn’s cry After giving birth to a premature baby who is in intensive care, a woman gets rest underground. The maternity hospital she was in moved its staff and patients because the hospital’s exterior had been bombarded in Kharkiv, Ukraine, on March 25, 2022. (Marcus Yam/Los Angeles Times)

In an underground hospital shelter-turned-makeshift maternity ward in this battered northeastern city, one heavily pregnant young woman perches on the edge of her bed, unable to be still, to rest.

Another curls on her side, tenderly cradling her swollen abdomen. Yet another, only a teenager, scrolls through her phone for updates on what’s happening in the blast-rocked streets above.

In Kharkiv, one of the most relentlessly bombarded cities in Ukraine, none of these expectant mothers embarked on a pregnancy believing that nine months of hopes and cares would culminate in the midst of a savage war. That they would find themselves giving birth in a below-ground suite of dilapidated rooms with low ceilings and dim lighting, with sputtering electricity and oxygen canisters that run perilously low.

“It was not their choice,” said staffer Nana Pasieshvilly, who was born in this hospital 47 years ago, and now spends her days and nights watching over the women and the ward. “It’s scary here.”

Many expectant mothers and their families escaped Kharkiv after the war began Feb. 24. The country’s second-largest city, just 25 miles from the Russian border, was an early target of Moscow’s all-out offensive, subject to weeks of pitiless attacks that have left whole neighborhoods in ruins.

But for some mothers-to-be, their time was too near, the danger of fleeing too great, the complex calculus of risk impossible to untangle. One in four Ukrainians have been driven from their homes, with 11 million people either internally displaced or becoming refugees in other lands.

For a few fleeting days, Ukrainians — and a watching world — believed that hospitals like this one would not be deliberately targeted. They were quickly disabused of that notion; the World Health Organization says at least 86 health facilities have been attacked since the start of the war.

The most notorious of those Russian strikes came in the besieged port city of Mariupol, where a maternity hospital was bombarded on March 9. In what became a wrenchingly iconic photo, a pregnant woman was carried away on a stretcher, her face pale against a bleak field of gray rubble, a polka-dotted blanket dangling below her.

The Associated Press, whose photographer captured the image, confirmed that the woman and her baby later died. The agency quoted medical staff as recounting how the woman, realizing she would not survive, begged them to let her die and try to save the infant instead.

That episode also offered a chilling preview of a Kremlin tactic being used this week as evidence emerges of atrocities against civilians in towns outside Kyiv, the Ukrainian capital: Russia claimed then that the Mariupol bombing was staged and the pregnant women were crisis actors.

For safety reasons, staff at the Kharkiv maternity ward did not want the hospital’s name and precise location disclosed. The building was recently damaged by bombardment that blew out the windows. Just outside the ward, a small generator groaned.

On the ground floor, several women waiting to be discharged carry plastic baskets holding swaddled newborns. One of the new mothers, 17-year-old Lera Vasilenko, bends down to coo at hers. Kate Shepel lays on her side in a dark shelter after a maternity ward moved its patients underground a safer place because its exterior had been bombarded, in Kharkiv, Ukraine, on March 25, 2022. (Marcus Yam/Los Angeles Times) 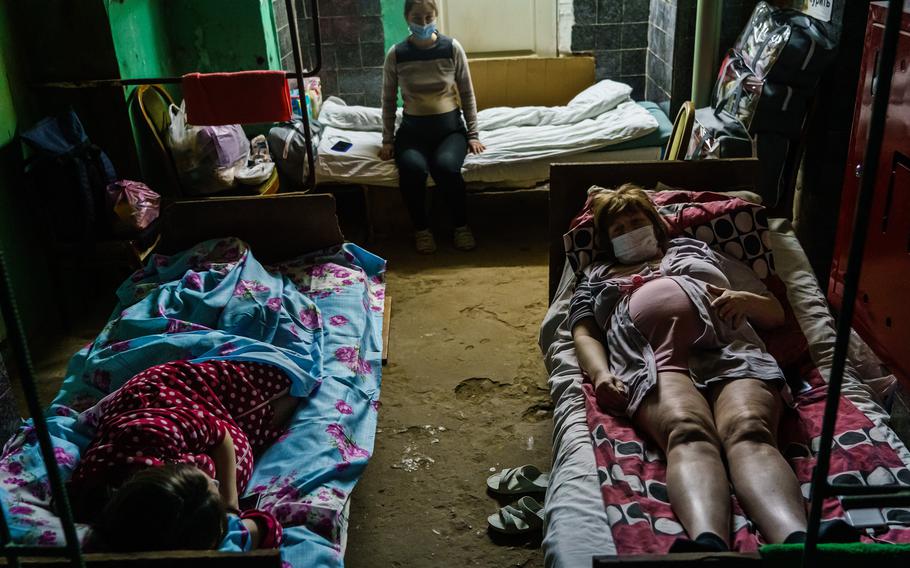 Marina Astafieva, top, in a shelter after a maternity ward moved its patients underground a safer place because its exterior had been bombarded, in Kharkiv, Ukraine, on March 25, 2022. (Marcus Yam/Los Angeles Times) Nurses at a local maternity hospital work underground after it had its exterior damaged by bombardment in Kharkiv, Ukraine, Friday, March 25, 2022. (Marcus Yam/Los Angeles Times)

In the basement shelter, where paint peels off the walls and concrete chips away from support columns, ultrasound machines and ventilators have been moved underground. Stocks of cleaning and hygiene supplies are low.

In the dim LED emergency light, nurses use their phone screens to illuminate patient charts. Some women who have just given birth sit recovering in their bathrobes.

Ward staffers were watching over two premature babies, including 6-week-old Valeria, who was evacuated from a nearby children’s hospital when the area was hit by strikes. Her mother was sheltering in Kharkiv’s subway.

In some ways, the women waiting to give birth here are the lucky ones. The staff knows of 200 pregnant women in the city, most of them sheltering at home. The maternity ward stays in touch with them as much as possible by phone and online, and finds neighborhood contacts to check on patients they don’t hear from.

“We are tracking them,” said Pasieshvilly, the ward supervisor.

Volunteer drivers bring in patients for checkups and ultrasounds, and are on standby for transporting women who go into labor.

Everyone hopes there won’t be bombs falling when their time draws near.

For now, the women wait. Marina Astafieva, who is 26, has trouble sleeping, but says she finds solace in the company of others about to give birth. Kate Shepel, 32, lies down in semi-darkness, the jutting curve of her belly all but obscured. Nineteen-year-old Anna sits up to check her phone.

Before the war, the landmark hospital had a 400-member staff, which has dwindled to a fraction of that. Life in Kharkiv has become so dangerous that the skeleton staff often stays at the hospital during episodes of heavy bombardment.

Pasieshvilly said she would never think of seeking safety outside the city.

“How could we leave people behind?” she said. “We gave our oath to our jobs, and we can’t abandon our patients.”

But she acknowledged the daily peril that threatens all those within and without. “The shelling continues,” she said. “Bombs are still flying.”

From the basement’s inner depths came the echo of a newborn’s wail. 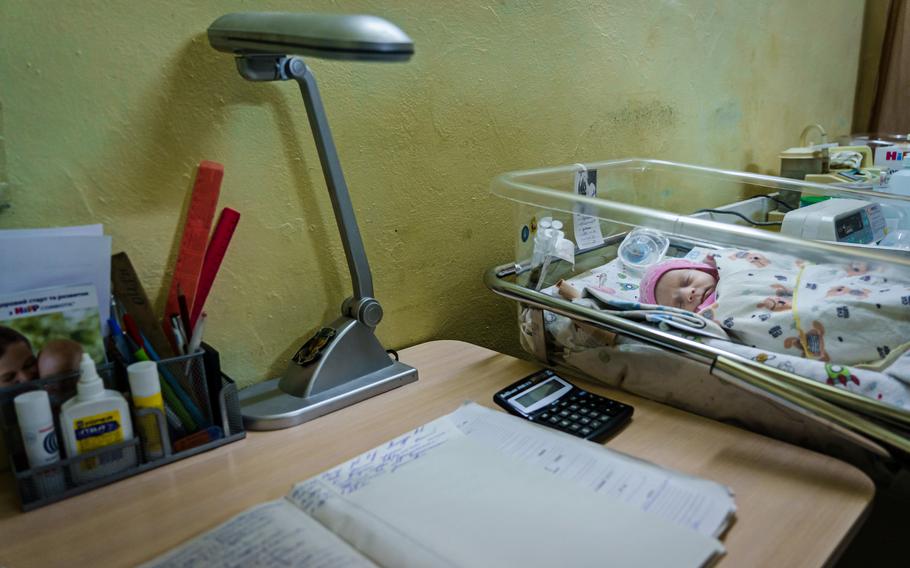 Premature babies get rest in a makeshift underground maternity ward after the hospital moved its patients underground a safer place because its exterior had been bombarded, in Kharkiv, Ukraine, on March 25, 2022. (Marcus Yam/Los Angeles Times)

(Yam reported from Kharkiv and King from Budapest, Hungary.)