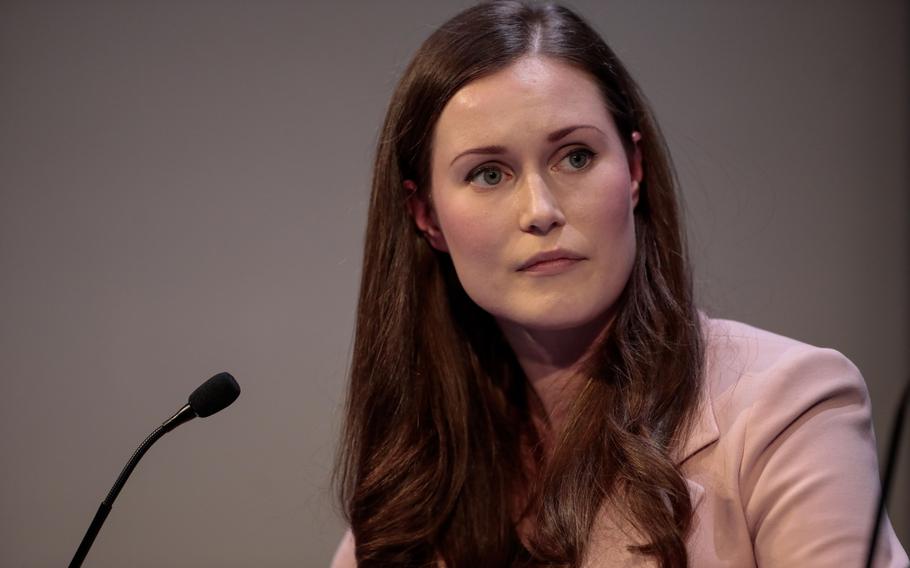 Finland’s Prime Minister Sanna Marin attends a meeting in Davos, Switzerland, on Jan. 22, 2020. According to reports on Friday, April 8, 2022, the Finnish government is due to send a white paper to parliament on its changed security environment next week, launching a formal process that would be finalized by the end of June, according to Prime Minister Sanna Marin. (Jason Alden/Bloomberg)

Finland said on Friday a Russian state aircraft is suspected of having violated its airspace, followed by a cyber attack on the websites of Finland's Foreign Ministry and Defense Ministry, as well as some other government services. The events coincided with a webcast speech to Finnish lawmakers by Ukraine's President Volodymyr Zelensky.

The 5.5-million-nation, which has the European Union's longest border with Russia and fought two wars with the Soviet Union, underwent a historic shift in public backing for joining the North Atlantic Treaty Organization in a matter of days following its neighbor's full-scale invasion of Ukraine. While opinion polls in neighboring Sweden reflect a similar change, its ruling Social Democrats have so far remained opposed to such a move.

The Finnish government is due to send a white paper to parliament on its changed security environment next week, launching a formal process that would be finalized by the end of June, according to Prime Minister Sanna Marin. While Marin and President Sauli Niinisto have steered clear of giving a clear endorsement to the NATO entry, speculation is growing among pundits and media that other options are less likely by now. Almost half of all lawmakers openly support an application.

While the security-policy white paper won't contain a proposal for joining, the government and president are prepared to submit an addendum on that "when the time is right" after they are satisfied lawmakers back the bid, Foreign Minister Pekka Haavisto said on Thursday.

Russia has repeatedly warned both Finland and Sweden against joining NATO, making both Nordic countries concerned about potential aggression from Moscow if they formally signal their alignment with the western bloc. NATO's Article 5 mutual defense clause only applies to members.

The denial of service attack on websites was over at 1 p.m. in Helsinki, the government said in a tweet, adding most sites operated normally during the attack due to countermeasures. In a joint decision with Niinisto, the cabinet also expelled two Russian diplomats, with a Russian embassy employee also denied a visa extension.

Finland's security service last month warned Russia would increase its spying and influence operations against the Nordic country. Authorities said earlier this week they are investigating a series of airspace violations by Russian civil aircraft that took place in March.