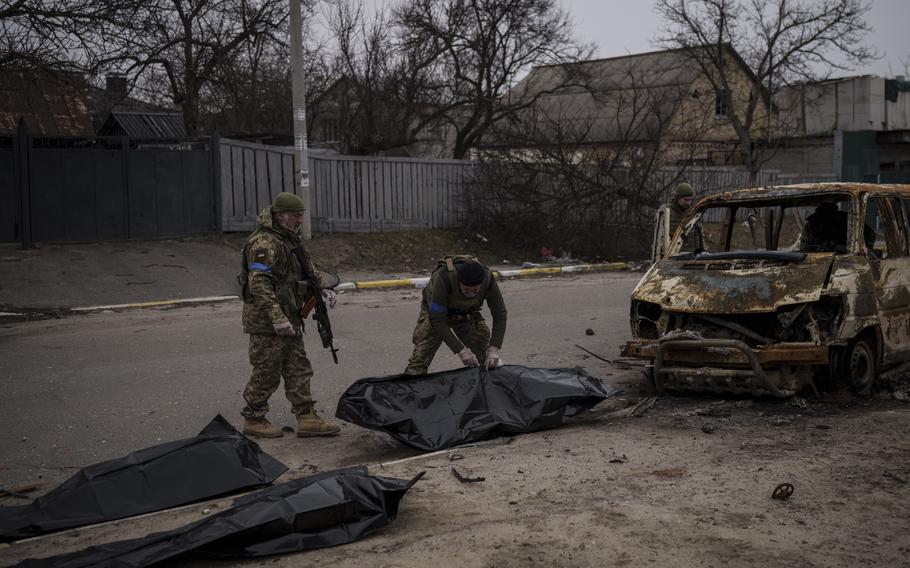 Ukrainian soldiers recover the remains of four killed civilians from inside a charred vehicle in Bucha, outskirts of Kyiv, Ukraine, Tuesday, April 5, 2022. Ukraine’s president plans to address the U.N.’s most powerful body after even more grisly evidence emerged of civilian massacres in areas that Russian forces recently left. (Felipe Dana/AP)

Almost 1 in 5 companies plan to take no stand on Russia’s invasion of Ukraine, slightly more than those who have publicized their position on the war, illustrating the reluctance of corporate leaders to speak out on hot-button issues.

In a survey of 190 firms by consultant Gartner Inc., 17% said they don’t plan to speak out about the ongoing conflict, which is more than the 14% who said they’ve communicated their stance externally. Just over half of companies polled said they’ve shared their views on the matter internally, the most cited approach, while others discussed their humanitarian efforts or ways that workers can access employee assistance programs.

These companies “have taken blanket approaches that they should not get involved in any social, cultural, or political issue,” said Brian Kropp, Gartner’s chief of human-resources research.

But that blanket provides less security in an age when stakeholders increasingly demand that companies speak out on a range of topics. Six out of 10 workers said they expect the chief executive officer of a company they’re considering working for to take a public stance on social and political issues they care about, according to the Edelman Trust Barometer, an annual survey from the public relations firm. That’s up from 55% who said so in 2019.

Some topics can be treacherous for companies to wade into, as Walt Disney CEO Bob Chapek learned recently. Chapek sparked protests last month from staffers for initially declining to comment on Florida’s bill barring schools from discussing sexual orientation with their youngest pupils, prompting him to later apologize. Now, his apology has drawn broadsides from Florida governor Ron DeSantis and right-wing organizations that back the legislation.

In separate ongoing research conducted by the Yale School of Management, 17% of 773 companies have so far not exited Russia or reduced their activities there, a stance the researchers deem “digging in.” That compares to about a third that have withdrawn from Russia, while 31% have suspended operations.

In the Gartner survey, 8% of firms with some ties to Russia said they’re still doing business with individuals or enterprises there that fall under sanctions imposed by Western nations.