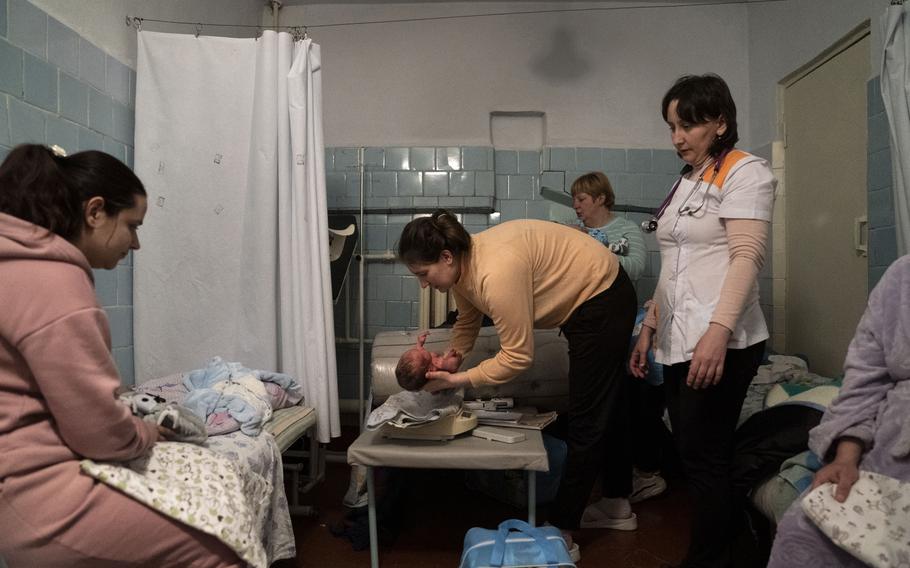 A doctor, right, checks on newborns in a hospital basement serving as a bomb shelter. (Michael Robinson Chavez/The Washington Post)

MYKOLAIV, Ukraine — Mothers with newborn babies, a woman with a heart condition and elderly people who couldn't walk on their own hurriedly evacuated to the basement at a Mykolaiv hospital on Sunday night as the booming thuds of artillery drew closer.

They made it down to shelter just in time. Five minutes after patients and staff had crowded into the cramped underground hallway, a suspected cluster munition landed right next to the building. The blast shattered nearly all of the windows. 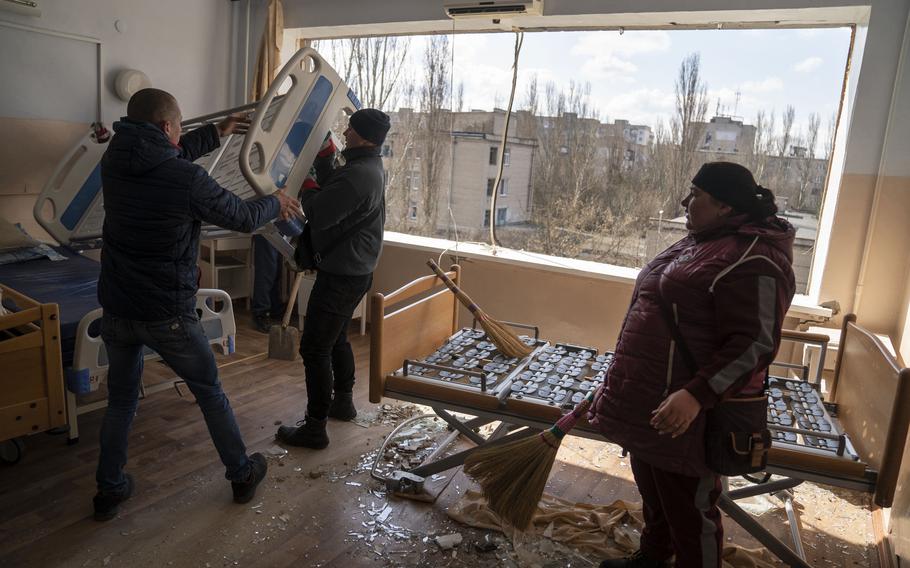 Volunteers and staff clean up the destruction left after an attack on a hospital in the key battlefield area of Mykolaiv, Ukraine. (Michael Robinson Chavez/The Washington Post)

It made for an eventful first night for Bohdan, who was born in the makeshift bomb shelter after his mother, Vitalina, and others from the maternity ward made the most harrowing journey to safety, from the hospital's top floor.

"The Russians are animals; there's no other explanation," said Bohdan's grandmother Vlada. The family declined to provide their surnames out of concerns for their safety.

Vlada cried as she hugged her daughter and met Bohdan for the first time. He was sleeping with a pacifier in his mouth. Three other women and their babies were sitting on cots in the small room in the basement.

Hospitals in Ukraine are being battered by artillery and airstrikes with increasing frequency. The World Health Organization said that as of March 30, it had verified 82 incidents of attacks on health care since Russia invaded Ukraine, causing 72 deaths and 43 injuries.

At Mykolaiv's City Hospital No. 5, no one was injured in the attack. As nurses and volunteers moved from one ward to the next sweeping up broken glass, their feelings ranged from distress to anger. One staff member cried as she opened the door to what used to be her laboratory. The window glass was gone. The glass in the cabinets was shattered, too.

"Gosh, can this end already?" said Lyubov Byaluk, a nurse. "What did we even do? We never attacked anyone."

The heavy shelling throughout Mykolaiv on Sunday — which killed 10 people and injured 46, according to Mykolaiv Mayor Oleksandr Senkevych — comes as the war with Russia could be shifting more toward eastern and southern Ukraine. Moscow has pulled back its forces from areas north of Kyiv, but its military has continued heavy fighting in the eastern Donbas region and along the front line east of Mykolaiv. 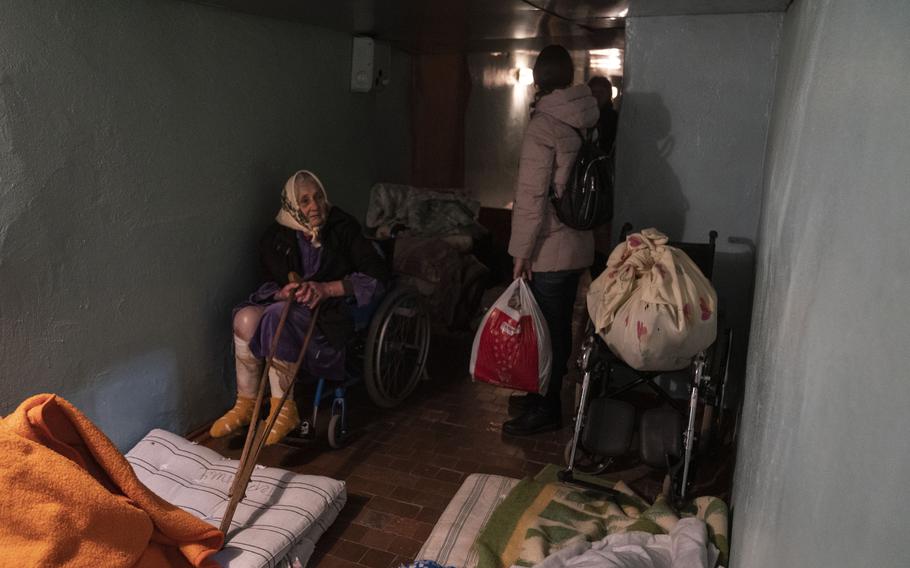 A patient waits in a hospital basement-turned-shelter in Mykolaiv, Ukraine, where hospitals are being attacked. (Michael Robinson Chavez/The Washington Post)

Mykolaiv, near Ukraine's Black Sea shoreline, has been a key battleground: Ukrainian forces have held off Russian troops here, delaying any potential assault on Odessa, the country's largest port city, 70 miles southwest. But the Russians maintain a presence in the neighboring Kherson region, just 50 miles east.

Vitaliy Kim, governor of the Mykolaiv oblast, said at a news conference Monday that Russian projectiles have hit more than 2,000 buildings — including homes, hospitals and other health facilities. The strikes have killed at least 161 people, including six children, he said.

Kim said that the Russian attacks are an "attempt to scare" residents but that the situation was "under control." He said no military facilities had been hit. Last week, a missile hit a main government building in the city center, killing at least 36 people and injuring others.

The part of the Mykolaiv hospital farthest from where the shell landed suffered less damage, so some patients were moved to that wing. Others were evacuated to other hospitals. In the basement, one elderly woman lay on a mat on the floor. She had to be carried downstairs on Sunday night.

On a cot in the hallway was Liuba, who had come to the hospital with chest pains and heart trouble. She held up a fist to illustrate the condition of her heart now, after a night that she described as "very, very scary." Upstairs, her sons were helping with the considerable cleanup effort. Then she planned to go home, even if it was against the doctor's orders.

"I'm too scared to stay here or go to another hospital," she said. 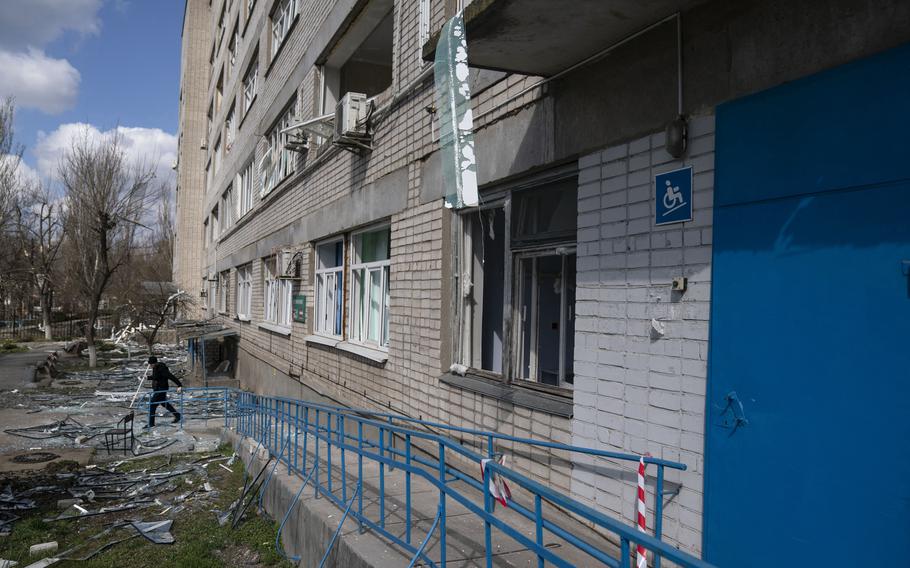