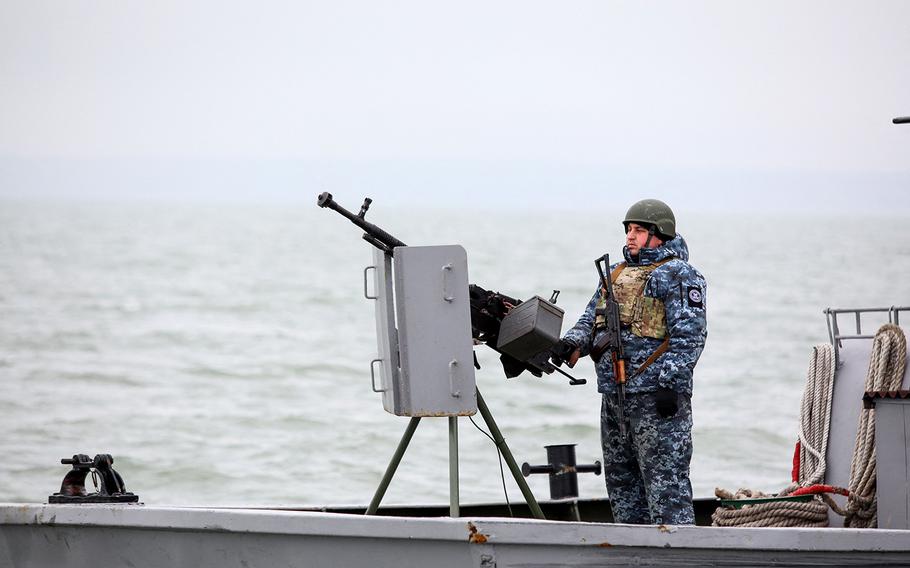 A serviceman stands guard aboard a boat patrolling an area of Ukraine’s Black Sea port of Mariupol on Feb. 11, 2022. (Aleksey Filippov/AFP via Getty Images/TNS)

(Tribune News Service) — At least a hundred companies worldwide have delayed or pulled financing deals worth more than $45 billion since Russia’s invasion of Ukraine.

These include initial public offerings, bonds or loans and acquisitions. U.S. equity market deals were the worst hit by global volatility in the first quarter as a crop of firms postponed listings, while Japanese and European debt markets also suffered from delays.

The disruption comes as the conflict roiled funding markets, hurt investor appetite for risk and increased uncertainty over growth, interest-rate hikes and supply chains. The pulled deals mean the feast in fees that bankers experienced last year may be about to turn to famine.

“Volatile markets have meant that it has been harder to execute deals,” said Marco Baldini, head of EMEA bond syndicate at Barclays Plc. Sales of high-grade bonds plummeted as the war in Ukraine unfolded, but in a promising sign “volumes have picked up significantly as we head into Easter,” he said.

About 50 companies have shelved their IPO plans since late February, of which almost 30 were U.S. listings, including the likes of Bioxytran Inc., Crown Equity Holdings Inc. and Sagimet Biosciences Inc. It’s difficult to estimate the total value of the delayed IPOs, as most of the transaction sizes haven’t been revealed.

The most prominent delays with disclosed amounts came from Asia and Europe. Olam International Ltd. postponed a primary listing of its food unit on the London Stock Exchange that would have valued the business at 13 billion pounds ($17.1 billion), while Chinese conglomerate Dalian Wanda Group Co. put on hold a planned Hong Kong IPO of its shopping mall unit that was targeting to raise about $3 billion.

“Many plans for fresh offerings are likely to be shelved until a measure of more calm returns,” said Susannah Streeter, senior investment and markets analyst at Hargreaves Lansdown Plc. “Timing is everything for an IPO.”

Mergers and acquisitions have not been left unscathed, with around 10 deals valued at more than $5 billion stalled since the war. That’s left global M&A down 15% in the first three months of the year to $1.02 trillion, the lowest tally since the third quarter of 2020, according to data compiled by Bloomberg.

Microsoft Corp.’s $69 billion takeover of video game publisher Activision Blizzard Inc. was one of the few megadeals as companies mostly shied away from large transactions.

The worst decline was in Europe, where acquisitions targeting the region’s companies fell 38%. The U.K.’s Spectris Plc ended negotiations in March to buy Oxford Instruments Plc in a deal that would have been valued at 1.8 billion pounds. Peel Hunt Ltd. said the delayed deals will dent its investment banking revenue, while peer Numis Corp. also warned of a hit.

The impact of the war has been felt across global bond markets, where issuance is down 14% so far this year, according to Bloomberg data. Eight issuers from Europe, including the Slovak Republic, utility EnBW Energie Baden-Wuerttemberg AG, and French financial firm Coface SA shelved more than $5 billion of bonds.

Other debt markets, including leveraged loans and asset-backed securities, are also struggling.

Callaway Golf Co. was marketing a $950 million loan before placing it on hold indefinitely in early March, citing market conditions. German eye-care firm Veonet Group shelved a 795 million euro loan that was in syndication on the day the war erupted on Feb. 24.

Even electric car giant Tesla Inc. had to delay a sale of more than $1 billion in asset-backed securities in mid-March, while the likes of Deutsche Bank AG had to put commercial mortgage-backed deals on hold.

“The war in Ukraine is exacerbating existing supply chain constraints and raising input costs for corporate borrowers, just as central banks are set to tighten financial conditions in response to the worst inflation data in decades,” says Scope Ratings in a recent report.