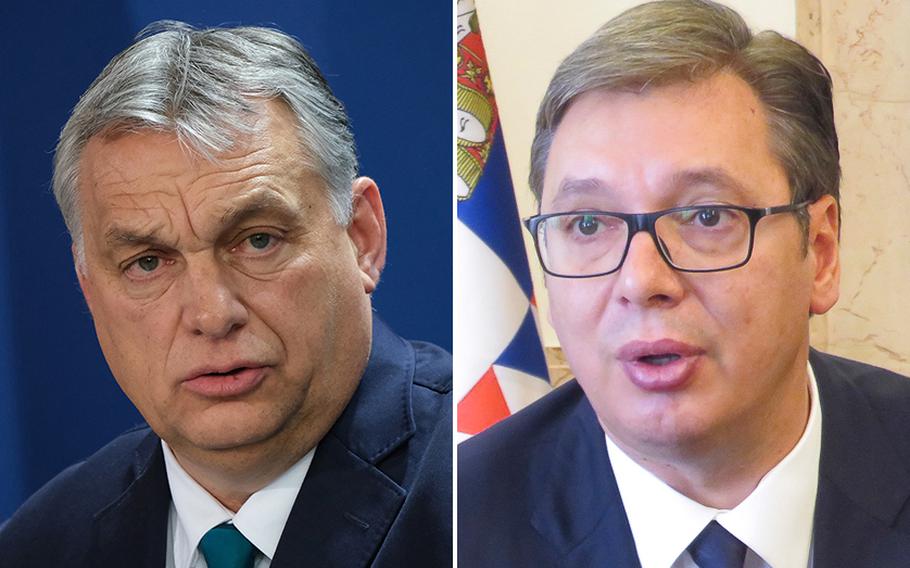 (Tribune News Service) — Two of Europe’s most dominant leaders are bidding to keep their grip on power in elections that have put a spotlight on their close ties to Russian President Vladimir Putin after his invasion of Ukraine.

Most polls suggest Hungarian Prime Minister Viktor Orban is on track to win a fourth straight term on Sunday, but the race is unusually tight after the opposition formed a six-party alliance and a survey published a day before the vote showed the two camps were neck and neck. Next door in Serbia, President Aleksandar Vucic is expected to have an easier path to victory, though is unlikely to repeat a landslide of two years ago.

The war in Ukraine has overshadowed the votes and both leaders have depicted themselves as the defenders of the nation. Opponents have sought to frame the elections as a choice between fostering integration with Western Europe or risking political and economic isolation.

Should they prevail, Orban and Vucic both face similar balancing acts as Europe contends with Russia. Hungary has cozied up to Putin and China while aggravating fellow European Union members over everything from control of the media and immigration to LGBTQ rights and cronyism. Vucic has struggled to reconcile Serbia’s traditionally close allegiance with Russia with the country’s ambition to join the EU.

With the incumbents reinforced by state media, both campaigns have pivoted toward the war as the countries feel the economic impact of energy security and inflation and the political fallout from Putin’s invasion.

Orban, 58, who returned to power in 2010 and has shaped Hungary into what he calls his “illiberal democracy,” was quick to back the initial round of EU sanctions against Russia and opened the door to Ukrainian refugees. He balked, though, at allowing Hungary to be a conduit for weapons and stopping flows of Russian oil and gas.

After Orban vowed not to let Hungary “become a sacrificial pawn in someone else’s war,” Ukraine President Volodymyr Zelenskiy singled him out in an address to a March 24 EU leaders summit, saying it was time he chose what side he was on.

For Vucic, 52, the conflict has helped him to deflect the opposition’s focus on corruption allegations in Serbia and environmental issues that were central to their attack following a wave of protests last year against pollution. The Serbian president has condemned the invasion but stopped short of joining the Russian sanctions. His party has replaced its initial campaign slogan highlighting economic achievements with “Peace. Security. Vucic.”

“Both are playing the card of people’s psychological desire to have predictability in the age of uncertainty by portraying themselves as the guardians of stability in troubled times,” said Vuk Vuksanovic, a researcher at Belgrade Center for Security Policy. “The war in Ukraine made life for the Serbian opposition even more difficult.”

The latest polling shows the message is working. Orban, the EU’s longest-serving head of government, widened his slender lead over the opposition candidate, Peter Marki-Zay, in the wake of the war. Still, an upset can’t be ruled out because of “huge uncertainty” over the polling data since the war upended the campaign, according to Tibor Zavecz, who heads pollster Zavecz Research in Budapest.

An opposition victory would herald a tumultuous period for Hungary. Marki-Zay has vowed to jail officials for graft and roll back Orban’s power consolidation. Orban, though, has tapped loyalists to helm key state institutions in a bid retain influence regardless of the election outcome. If elected, Marki-Zay has also pledged to quickly work to unblock billion of euros in EU funding that have been delayed because of corruption concerns.

While a survey published by opposition newspaper Nepszava on Saturday showed a tie, most polls put Orban’s Fidesz party ahead by about five percentage points. Such a margin of victory would translate into enough parliamentary seats to form a government, yet shy of the number needed for a repeat of the supermajority that allowed Orban to change the constitution and electoral law in his favor. Voting in Hungary opens at 6 a.m. local time and closes at 7 p.m., with unofficial results expected late evening.

A win for Orban, his fifth since first becoming prime minister in 1998, will reflect his control of the narrative and his revamp of the electoral system, according to Mujtaba Rahman, managing director for Europe at the Eurasia Group political risk consultancy. “That will leave Brussels with the task of dealing with the maverick they have so far failed to tame,” he said on Twitter.

In Serbia, there are multiple elections after Vucic, who has dominated politics in the biggest former Yugoslav republic for a decade, pushed for snap parliamentary ballot more than two years ahead of schedule. The vote is being held alongside the race for president as his term expires in May, plus a local ballot for who runs Belgrade.

Unlike in Hungary, Vucic benefits from a fragmented opposition. As many as eight candidates are running for president, while 19 parties and alliances vie for seats in Serbia’s parliament. His top challenger is Zdravko Ponos, a former army chief who has vowed to root out corruption and cronyism.

But relations with Russia loom large. EU pressure is building on Serbia to align its foreign policy with the bloc it aspires to join, but turning against Russia would hurt any candidate because many Serbs see the country as its protector as well as main energy supplier, said Bojan Klacar, executive director at the Center for Free Elections and Democracy in Belgrade.

A poll by Faktor Plus showed Vucic’s Serbian Progressive Party on at 53.4% of popular support, while the closest rival was on 14%. Apart from three groups, all the others in are in single-digits. Voting starts and finishes an hour later than in Hungary, from 7 a.m. to 8 p.m. local time. First preliminary results on the presidential race are expected within an hour after voting ends, followed by partial counts of the vote for parliament.