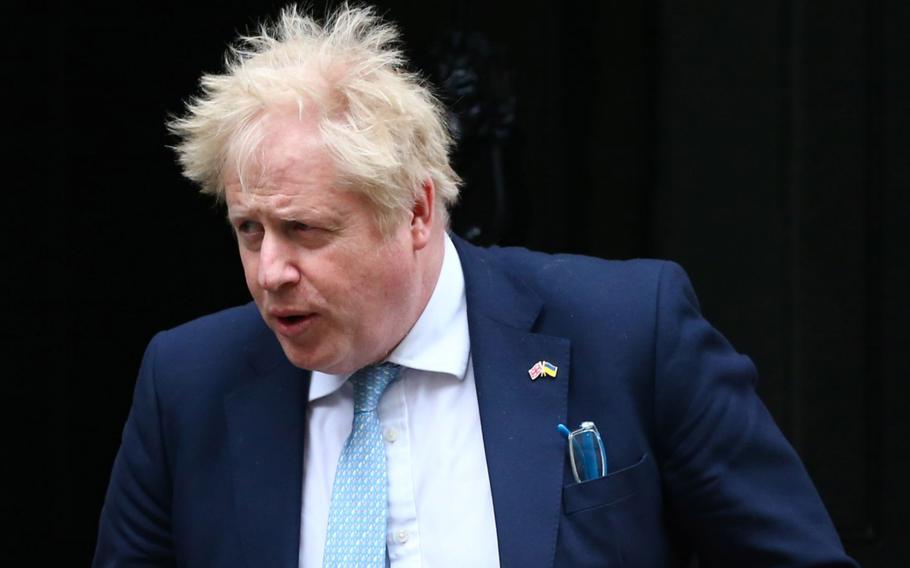 UK Prime Minister Boris Johnson, dubbed a greased piglet by a predecessor for his ability to get out of a tight political spot, appears to have won over critics from his own Conservative Party through his handling of the war in Ukraine.

Just six weeks ago, Johnson’s premiership was in peril after a series of allegations that he and his team held parties that broke pandemic lockdown rules. Other gaffes, including comparing an opponent to a pedophile and seeking to bend Parliamentary rules for a colleague, had also backfired. At least 14 Tory MPs called on him to resign, with others saying they would reserve judgment until the police had concluded their probe into the alleged breaches.

But a lot has changed since. Johnson’s statesmanship -- punishing Russia with economic sanctions and his near-daily phone calls with Ukrainian President Volodymyr Zelenskiy, who is seen as a hero in the U.K.-- has turned the tide of opinion among colleagues back toward him: at least for now.

“Faced with the most serious international crisis since 1945, a terrifying potential circumstance, is now the time to change our leader?” Roger Gale, a Tory MP who has called for Johnson to go, told Times Radio late on Tuesday. “The answer is no it isn’t.”

Johnson is also helped also by the absence of a clear political challenger. His most likely opponent, Chancellor of the Exchequer Rishi Sunak, gained popularity during the pandemic because of Treasury largess to help workers and businesses -- but that shine is now wearing off, and Sunak was criticized by Tory colleagues last week for not doing enough to help Britons struggling with the rising cost of living. Another candidate Foreign Secretary Liz Truss, is often ridiculed by colleagues for her love of photo-opportunities.

Allies of Johnson decided the tide had turned sufficiently to risk inviting all Conservative MPs to dinner and drinks at a central London hotel on Tuesday night. Around 200 dined on smoked haddock tart, chicken ballotine and hazelnut praline, accompanied by red and white wine.

But the dinner came just hours after the Metropolitan Police said they would be handing out the first twenty fines in relation to the so-called Partygate scandal -- an indication they deem laws to have been broken. On the way in to the hotel, the MPs walked past families who lost relatives to Covid. One protester shouted, “Off to another party, are we?”

During the after-dinner speech, which drew a standing ovation, Johnson made self-deprecating jokes about being more popular in parts of Kyiv than in parts of Kensington before adding that MPs should not worry and that he would turn his premiership around, multiple witnesses said.

Johnson also joked Russian President Vladimir Putin is deluded and isolated because he has no colleagues to challenge him unlike the Conservative Party system. He characterized the letters from colleagues calling for his resignation as elastic, meaning they can be withdrawn by the sender, an appeal to his critics to hold their fire.

At his weekly question-and-answer session with MPs, Johnson faced an opposition who would not let news of the fines go unquestioned. The Scottish National Party’s Westminster leader, Ian Blackford, accused Johnson’s government of “partying through the cost of living emergency” just as millions of families are “desperately trying to figure out how they will possibly afford” a looming 700-pounds-a-year rise in their energy bills.