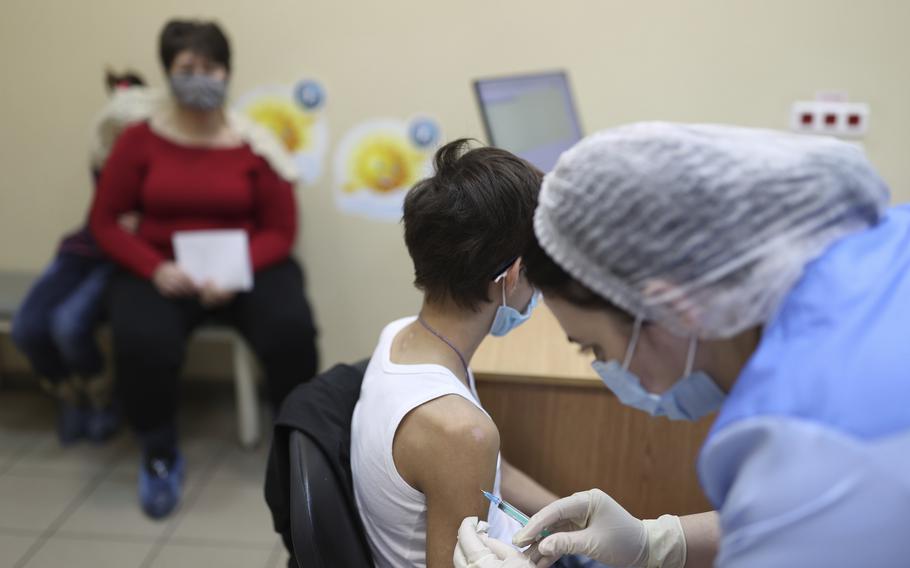 A teenager receives a dose of Russia’s Sputnik M (Gam-COVID-Vac-M) COVID-19 vaccine in Krasnodar, Russia, Friday, Feb. 4, 2022. The Russian president says his government is considering loosening some coronavirus restrictions, even as the country is facing a record-breaking surge of infections because of the highly contagious omicron variant. (Vitaliy Timkiv/AP)

We may be talking about a Russian military disaster now, but not so long ago, we were talking about a potential global health success for Russia. Just a year ago, Moscow’s quickly approved coronavirus vaccine, Sputnik V, looked to be in ascendance, casting off initial Western skepticism. The respected British medical journal Lancet published a peer-reviewed paper that found the vaccine had high efficacy. Dozens of countries would go on to grant emergency approval to Sputnik V.

Global health experts celebrated. Cheaper and easier to store than some other vaccines, Sputnik V looked likely to fulfill an important international need. But it was also a diplomatic tool for the Kremlin. While the vaccine had been developed using adenovirus technology by the Moscow-based Gamaleya Research Institute of Epidemiology and Microbiology, it was backed by the Russian Direct Investment Fund (RDIF), a sovereign wealth fund.

One key aim appeared to be restoring international views of Russian scientific research, once lauded but in decline for decades. It wasn’t subtle. The vaccine was named after the satellite that saw the Soviets beat the United States in the space race. But here could be a Russian triumph all of the world could share in: Kirill Dmitriev, RDIF chief executive, said there was the capacity to vaccinate 700 million people outside of Russia in 2021 alone.

Even then, however, not everyone was receptive. Ukrainian lawmakers approved a bill that officially banned vaccines made in Russia. The decision was at least partly based on geopolitical concerns: Moscow had already supplied the vaccine to the separatists it was backing in eastern Ukraine. Last year, when I asked Pavlo Kovtoniuk, Ukraine’s deputy minister of health from 2016 to 2019, about the move, he said the health benefits of Sputnik V couldn’t be separated from Ukraine’s national security concerns about Russia.

“Over the last few decades, and especially during the previous seven years of undeclared war, Ukraine has well learned what hybrid warfare is,” Kovtoniuk said.

If Sputnik V once looked like a vital tool for the Kremlin’s geopolitical ambition, it now looks like another victim of it. Following the Russian invasion of Ukraine on Feb. 24, both RDIF and Dmitriev are now under Western sanctions. The U.S. Treasury said the sovereign wealth fund is widely considered “a slush fund” for Russian President Vladimir Putin and “emblematic of Russia’s broader kleptocracy,” while the chief executive was dubbed a “close associate” of the Kremlin leader. In a letter received after the initial publication of this article, the RDIF described the Treasury’s accusation as “defamatory.”

It is still not clear what impact the sanctions are having on the supply of and demand for Sputnik V. There is an exemption for coronavirus-related supplies in the U.S. sanctions on Russia. But even during a pandemic, sanctions are often a messy business - as Iran and Cuba found out earlier during the health emergency. And Andrea Taylor, a researcher at Duke University who tracks global vaccine supply, said that even before the sanctions, data about Sputnik V was spotty and unreliable.

In an article for Think Global Health, Lillian Posner, Sarah Nance and Samantha Kiernan noted that a number of Russian banks had been cut off from the Society for Worldwide Interbank Financial Telecommunication (SWIFT) messaging system. “This removal, combined with decisions by major Western credit card companies to halt operations in Russia, essentially bans Russia from making international transactions,” they wrote.

It must be a bitter pill to swallow. When I asked a representative of RDIF how sanctions were affecting Sputnik V, he sent Today’s WorldView an official statement, which argued that the fund was “never involved in any political activities, does not interact in any way with Ukraine and follows the world’s best investment practices, which has been acknowledged by all its international partners as well by national regulators.”

The statement continued, conspiratorially: “The restrictions imposed by the U.S. authorities complicating RDIF efforts on the international promotion of the Russian vaccine products, have been lobbied by a number of large Western pharmaceutical companies. As a result of such unfair competition, billions of people around the world may be deprived of access to effective and safe Russian-made vaccines.”

After the publication of this article, Mikhail Irzhevsky, general counsel for RDIF, sent a letter threatening legal action against The Washington Post and rejecting the basis for the sanctions.

Irzhevsky wrote that Western sanctions targeting RDIF were “solely meant to prevent the Russian economy from attracting financial resources and not for any wrongdoing,” and added that the fund had issued a statement on March 2 saying it “supports restoration of peace [in Ukraine] and hopes negotiations between representatives of Russia and Ukraine are successful.”

Whatever the impact of sanctions, the light that Sputnik V once shone for Russia has dimmed. Any diplomatic benefits the Kremlin gained from the vaccine are easily overshadowed now by the invasion of Ukraine. Even countries that had once made major purchases of Sputnik V, such as Kenya and Gabon, voted in favor of the United Nations General Assembly motion condemning the invasion.

Emergency-use listing from either the World Health Organization or the European Medicines Agency, two key global approvals that could open up travel to those vaccinated with Sputnik V and allow the vaccine to be used by vaccine-sharing initiative COVAX, seems as distant as ever. Judy Twigg, a professor at Virginia Commonwealth University who studies Russian politics and health, said WHO approval probably was “dead in the water.”

Sure, Twigg continued, perhaps China or India would still work with Russia. But both countries have their own vaccine manufacturers they probably would favor. Countries that had worked with Sputnik V to set up manufacturing capacity for the Russian vaccine had already run into problems with contracts and supply chains. Now there is reputational damage to consider, too. “They’re all actively searching for alternatives,” Twigg said.

Long before the invasion, there had been complications for these international partners - either because of the slow supply of raw materials from Russia or because the second dose of the vaccine was complicated to make, according to Duke’s Taylor. Though some had shifted to “Sputnik Light,” a rebranded one-dose version of the vaccine, others have already moved on.

While the pandemic is still ongoing, some experts say the rapid spread of the omicron variant, which provided many people with antibodies, as well as the arrival of greater manufacturing capacity and new, second-generation vaccines, had diminished the need for Sputnik V. “It’s a very competitive environment and it’s only going to get more competitive,” said J. Stephen Morrison, director of the Global Health Policy Center at the Center for Strategic and International Studies.

The problem was not the vaccine itself. The Kremlin overpromised and underdelivered on Sputnik V, while problems with data and secrecy led to widespread distrust of the vaccine - even, it seems, in Russia itself, where almost half of the population is still not vaccinated despite punishing outbreaks and huge death tolls. The invasion of Ukraine was just the latest setback.

According to data compiled by UNICEF, fewer than 80 million doses of Sputnik V and Sputnik Light were exported in 2021 - barely above 10 percent of what RDIF’s Dmitriev had once promised.

Twigg had sympathy for the Russian researchers who worked on Sputnik V. They had been betrayed by their government, Twigg said, “before the war by granting regulatory approval to their product before it was ready to go, casting a global shadow over the quality of their work for the sake of a PR campaign.” As Morrison put it, Russia “failed despite having a relatively decent product.”

If the Kremlin had hoped to return to the glory days of Russian medicine and scientific research, the reality has been the exact opposite. The researchers who had stayed in Russia over the past few decades, despite an exodus of colleagues and increasing political pressure, will be more compelled than ever to leave. Sputnik V has become a global health defeat, snatched from the jaws of victory.