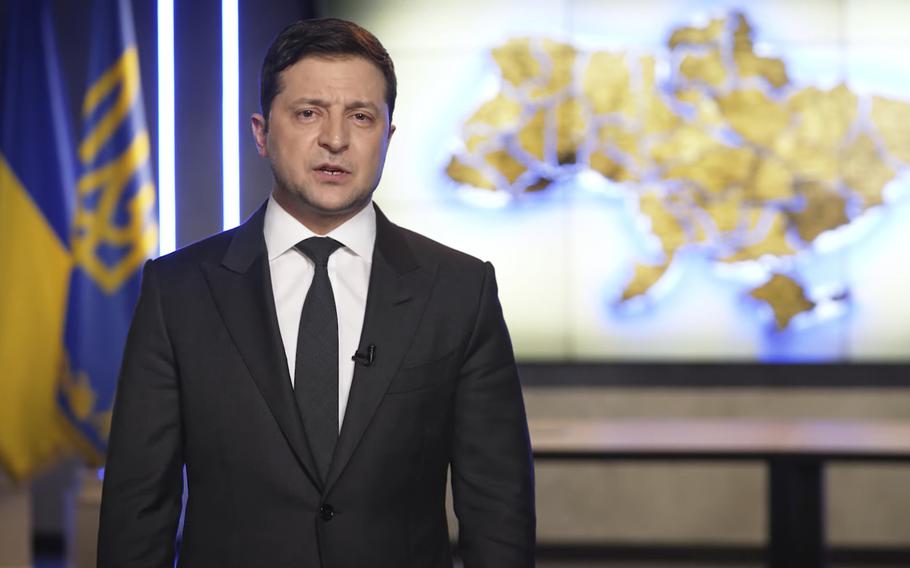 Ukraine President Volodymyr Zelenskyy gave a rare interview to four Russian journalists on Sunday. A short time later, the Kremlin ordered them not to publish it — the latest example of the steps being taken to censor any news that might cut through the pro-government narrative about the war on Russian state television.

In the 90-minute interview, Zelenskyy called on Russian President Vladimir Putin to meet him in a neutral country for eventual negotiations to end the war. He denounced the destruction of his country and called on Russians to “support the truth.” Zelenskyy also said he is open to Ukraine effectively renouncing its ambitions to join NATO in a potential peace deal with Moscow, as the bloody invasion enters its second month.

The Kremlin’s communications regulator and Internet censor, Roskomnadzor, notified Russian news outlets of the requirement to refrain from publishing the interview. It said it had begun to investigate outlets that conducted the interview “to determine the extent of responsibility and the taking of measures of response.”

Russia’s media crackdown has intensified during the war. This month, Putin signed into law a measure prohibiting what Russia calls “fake” news about its military, as well as language calling the invasion an “invasion” rather than a “special military operation.” Violators could face a 15-year prison sentence.

In this case, some of the journalists involved in the interview were based abroad — including Ivan Kolpakov, the editor of Meduza, a Russian-language news website based in Latvia. Meduza published anyway, as did two other independent outlets. Videos of the interview were also available on YouTube. The Meduza video has been viewed more than a million times.

Zelenskyy called for “security guarantees” signed by other countries and said any agreement “should not be another piece of paper” like the Budapest Memorandum from the 1990s, when Ukraine agreed to give up its nuclear weapons, while the United States, Britain and Russia pledged to respect Ukraine’s borders and not attack it, among other promises.

Days after Russian launched its invasion in February, the Kremlin began reversing years of relative Internet freedom and restricting American social networks and Western news sites. Russia also shut down many independent media outlets, including Echo of Moscow, TV Rain and Meduza. Some journalists have fled the country.

On Russian state-run television, the invasion is portrayed as a righteous military operation to free the people of the Moscow-backed separatist regions in Ukraine’s eastern Donbas and liberate the rest of the nation from illegitimate “Nazi” authorities.

Some Russians — especially tech-savvy young people or those with social, educational or professional ties to the United States and Western Europe — are trying to break through the digital iron curtain using virtual private networks. International news outlets have also used technology to circumvent the news blockade, pointing readers to VPNs, the encrypted Tor browser and even old-fashioned radio.

Later Sunday, Zelenskyy posted a video response to the Russian ban on his interview, which he said “would be ridiculous if it wasn’t so tragic.”

“They themselves are afraid of a relatively short conversation with several journalists,” the video’s English subtitles say. “Well, if there is such a reaction, then we are doing everything right, then they are nervous.”

The Washington Post’s Cat Zakrzewski and Gerrit De Vynck in Washington contributed to this report.