(Tribune News Service) — Russian tankers carrying oil chemicals and products are increasingly concealing their movements, a phenomenon that some maritime experts warn could signal attempts to evade unprecedented sanctions prompted by the invasion of Ukraine.

In the week ended March 25, there were at least 33 occurrences of so-called “dark activity” — operating while on-board systems to transmit their locations are turned off — by Russian tankers, said Windward Ltd., an Israeli consultancy that specializes in maritime risk. That’s more than double the weekly average of 14 in the past year.

The dark operations occurred mainly in or around Russia’s exclusive economic zone, according to Windward, which conducted the research at Bloomberg’s request.

Commercial vessels are required by international maritime law to have their automatic identification system, or AIS, turned on while at sea. Disabling or manipulating a ship’s identification system is at the top of deceptive shipping practices cited by the U.S. Treasury Department in an advisory last May to curb illicit shipping and sanctions evasions.

“There’s no reason why they should have their AIS turned off,” said Gur Sender, Windward’s program manager who specializes in compliance and risk issues. “Investigating if a vessel is engaged in deceptive shipping practices related to specific regimes is crucial to protect your business from dealing with sanctioned entities.”

Since the Feb. 24 invasion of Ukraine, the U.S., U.K. and other allies have ramped up sanctions against the Kremlin. U.S. President Joe Biden issued an executive order on March 8 banning imports of Russian oil and gas, while on the same day, the U.K. said it will phase out oil imports by the end of the year. Both countries, along with Canada, have also barred Russian ships from accessing their ports.

As more countries and businesses shun commerce with Russia, the country’s fleet will be under pressure to conduct dark activity and even engage in illicit shipping to stay afloat, said Ian Ralby, chief executive of I.R. Consilium, a maritime law and security consulting firm that works with governments.

“Russia has quickly become a pariah state so they are obscuring some of their activities because a lot of people on both ends of a transit don’t want any association to Russia,” said Ralby. “Anywhere that Russia appears in the overall management or operation and ownership of the vessel, there are concerns about dark activity right now. Almost anything that they are going to be doing is gaining scrutiny and legal concerns because of all the various sanctions.”

If the isolation of Russian ships and crew continue, they will have little choice but to take offers that are given to them, making them susceptible to “all sorts of criminal and nefarious manipulation,” said Ralby. “We may see a parallel global market emerge where there is internal trading among all these sanctioned states and their enablers,” he said.

In many of the cases of dark activity, operations are conducted between a Russian-flagged or owned ship and non-Russian vessels, according to Windward. Ships that conduct operations side-by-side exhibit tell-tale patterns of movements and speed, even if their transponders are off. Satellite imagery can also reveal operations.

Windward’s data shows that the number of ship-to-ship meetings that lasted at least three hours between Russian oil tankers and non-Russian vessels has remained relatively normal. That’s enough time to allow oil tankers to transfer their goods to a third vessel that’s not affected by sanctions or bans, said Sender.

The occurrences are also happening close enough to ports where ships can potentially load up on clean fuel products, he said.

Windward has also detected some vessels entering Russian territorial waters and visiting its ports for the very first time, even as the overall number of ships making a maiden voyage to Russia falls.

Since the outbreak of the conflict, 22 unique vessels — some of which are owned or operated by companies registered in the U.K., U.S. and Germany — have entered Russian territorial waters for the first time, according to Windward.

In one instance, a tanker managed by an American company departed from the Chinese city of Dongying on Feb. 25 and entered Russian waters on March 3, making its first-ever Russian port call in Nakhodka. The tanker departed the port and drifted in Russian waters before calling port on March 19 in a tanker terminal in Vladivostok.

The U.S. ban on Russian oil came into effect March 8 for new purchases, but provides a 45-day window for U.S. buyers to wind down their existing contracts.

“While this voyage is not considered illegal or a violation of sanctions, it still raises questions” given current U.S. policies, according to a Windward AI Insights note. “It will be interesting to see if this trend continues and how many companies will view these new regulations and restrictions as mere recommendations.” 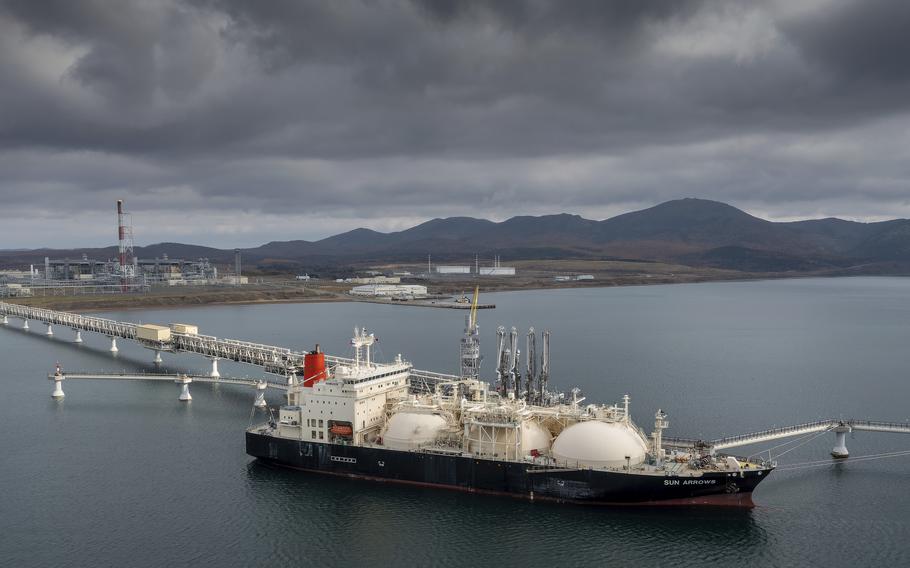 The tanker Sun Arrows loads its cargo of liquefied natural gas from the Sakhalin-2 project in the port of Prigorodnoye, Russia, Oct. 29, 2021. (AP)