American teacher in Ukraine released from Russian custody after 10 days 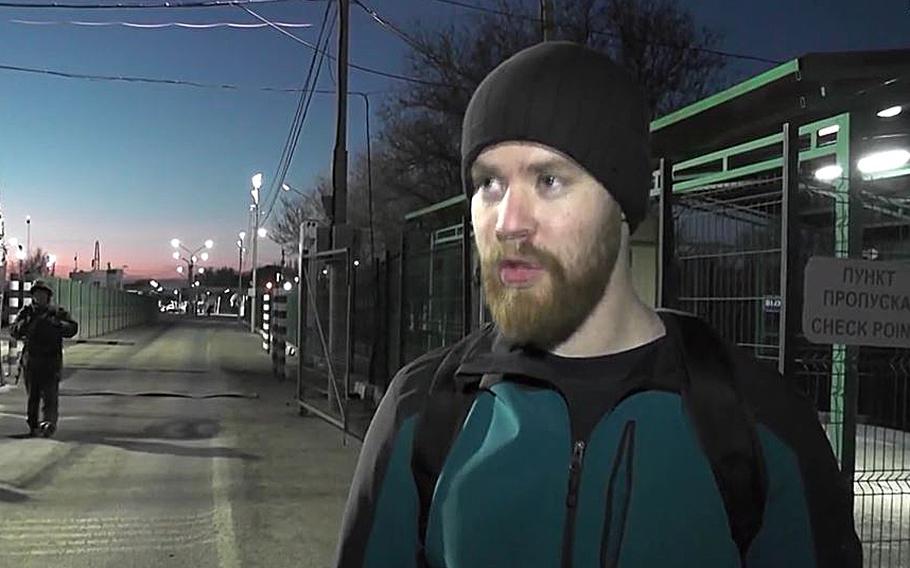 A video screen grab shows American Tyler Jacob fleeing to Turkey on March 13, 2022. According to reports on Saturday, March 25, Jacob has been released from Russian custody and reunited with his family. (Daily Mail/Russian video)

Tyler Jacob, a 28-year-old American who was teaching in Ukraine, has been released from Russian custody and reunited with his wife and daughter, Sen. Amy Klobuchar, D-Minn., said Friday.

Jacob, a Minnesota native, was detained by Russian troops roughly two weeks ago while he was fleeing the southern Ukrainian city of Kherson, his parents told CBS affiliate WCCO-TV. He was on board a bus evacuating people from the city to Turkey when he was taken away by Russian soldiers at a checkpoint in Crimea, his father said. Russia annexed Crimea from Ukraine in 2014.

Jacob was the only U.S. citizen on the bus, according to his father, who said Russian state media had made a "heart-wrenching" propaganda video featuring his son. Jacob was later taken to Russia, where he was held for 10 days, Klobuchar said in a statement, adding that his release was secured with the assistance of the State Department and the U.S. Embassy in Moscow.

"While this is good news, my heart remains with all those separated from their loved ones or in danger," Klobuchar said. "As Vladimir Putin continues his senseless war, our commitment to supporting the people of Ukraine is steadfast."

A State Department spokesperson said the agency was aware of the reports of Jacob's release but declined to further comment due to privacy concerns.

Jacob's mother, Tina Hauser, said on CNN's "Don Lemon Tonight" that she spoke with her son on Friday. She said he was in a NATO member state, though she did not specify the country.

"It sounded like angels singing in my ear, hearing his voice," Hauser said. "It's going to be astronomical, the feelings that are going to flow through me, when I get to give my son a hug for the first time."

Jacob said he had been treated very well in Russian custody and had "no complaints," his father said.

Kherson, home to some 290,000 people before the invasion, is a vital port and Black Sea shipbuilding city. It was one of the first Ukrainian cities to come under heavy Russian shelling and, later, occupation, but the Pentagon said Friday that Moscow appeared to have at least partially lost control of Kherson.

Another U.S. citizen, WNBA star Brittney Griner, has been detained since February by Russian authorities. The two-time Olympic gold medalist was arrested after Russian officials said they found vape cartridges containing hashish oil in her luggage at a Moscow airport.

Griner is "is doing as well as can be expected," the State Department said after a U.S. consular officer was able to visit her this Wednesday.