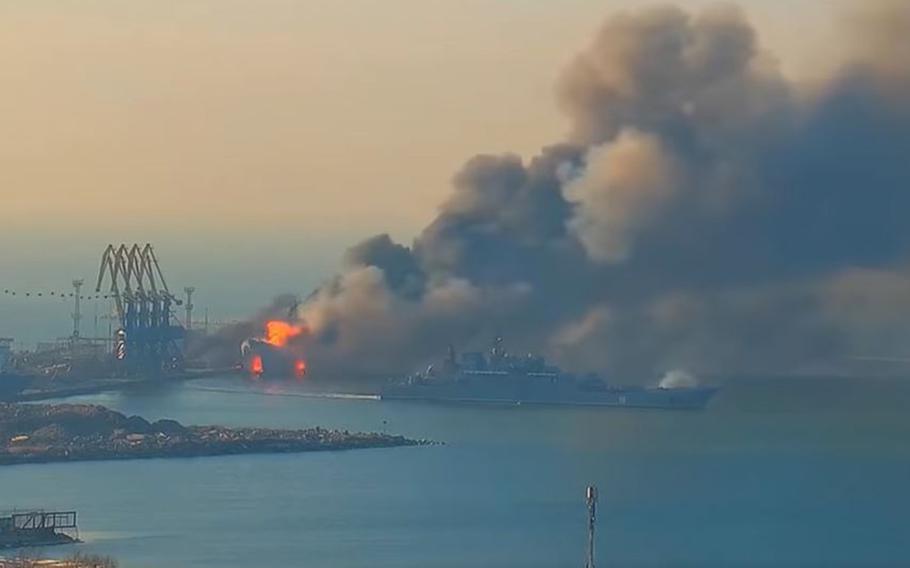 A screenshot from a video showing fires and columns of smoke rising from a ship docked at a port in Berdyansk, Ukraine, March 24th, 2022. Ukraine’s navy claimed Thursday it had destroyed a Russian landing ship at Russian-occupied Berdyansk. (Facebook)

Ukraine’s navy claimed Thursday it had destroyed a Russian landing ship at Russian-occupied Berdyansk, as videos showed fires and columns of smoke rising from a ship docked at the city’s port.

The port, which sits on the Sea of Azov southwest of besieged Mariupol, has been used by Russia to deliver military supplies in support of its month-long assault on Ukraine. With heavy casualties and equipment losses taking a toll on Russia’s advance, Moscow has described the port as a crucial entry point for reinforcements.

The damage to the ship was captured in social media videos verified by The Washington Post and satellite images. The flames were visible at far distances in clear skies and the smoke so dense that it appeared in images taken in space.

The Ukrainian claim of triumph comes as a Russian advance has stalled amid logistic difficulties, flagging morale and insufficient manpower. But the setback is probably minimal for Russian logistical efforts, said H.I. Sutton, an independent defense analyst.

“It’s a highlight for Ukrainians, particularly in the naval sphere, but it’s probably not significant for Russia,” he said. “It’s a setback, but it doesn’t change the strategic picture at all.”

Given the smaller explosions coming from the ship in the videos, Sutton said it was probably carrying ammunition and fewer soldiers due to limited space.

Ukraine’s deputy defense minister, Anna Malyar, declined to disclose the ship’s contents but said it could carry up to 20 tanks, 45 armored personnel carriers and 400 paratroopers. She described it as “a huge target that was hit by the strength and means of the Ukrainian Armed Forces.”

The fires began shortly after 5 a.m., according to The Post’s analysis of the length and angle of the visible shadows.

A security camera pointing toward the dock filmed black smoke drifting from the ship site. Seconds later, it captured what appears to be a blast — a fireball that quickly disappeared. From another angle, sparks erupted from the deck. Several explosions followed until the entire ship was engulfed in flames.

Two other military ships pulled away from the port, at least one of them aflame.

The cause of the fires is not clear from the footage, said Rob Lee, a senior fellow at the Foreign Policy Research Institute. He said landing ships can play a key role in sustaining assaults but noted that it was unclear whether much of the equipment remained on board or had been unloaded.

Still, losing such a vessel could be “a problem for them given the slow production rate of new ones and how old some of the existing ones are,” Lee said.

The Ukrainian navy identified the destroyed ship on their Facebook page as the “Orsk” of Russia’s Black Sea Fleet, sharing images of the alleged “occupier” ship in an undated photo before the explosion, as well as visuals of the fires.

“One of the Russian ships cannot be restored and also several other ships have been affected,” Ukrainian Defense Ministry spokesman Oleksandr Motuzyanyk said in a briefing Thursday. He declined to disclose operational detail, stating that the “tools” used on the ships were “not that important.”

“We can tell you for sure this operation has been a success,” he said.

The shape of the Orsk appears to match the outline of the ship engulfed in flames in the video. State-owned Russian media outlets published a video of the Russian Black Sea Fleet’s Orsk Project 1171 offloading armored military vehicles on Monday at Berdyansk. Television network Zvezda claimed that the Orsk was the first Russian ship to enter the port and said it would help cut down on the delivery time of military equipment to troops.

The network called the ship’s landing “an epic event,” the BBC reported.