A man hurries away from a building that had just been struck by Russian bombardment in the Moskovskyi district in Kharkiv, Ukraine, on Friday, March 25, 2022. (Marcus Yam/Los Angeles Times)

KHARKIV, Ukraine (Tribune News Service) — In the night sky over what was once a vibrant European metropolis, the stars blaze down. So little light is emanating from Ukraine’s second-biggest city that the constellations above are, like they were centuries ago, vivid in the blackness.

Kharkiv, home to nearly 1.5 million people before the war, has suffered the most relentless Russian bombardment of any Ukrainian city other than the battered southern port of Mariupol. Hundreds are dead; the living — the third or so of the population that remains — are hungry and terrorized.

Sometimes, the air raid sirens don’t start until after the thunderous explosions have already begun. Huddled in basements and subway stations, mothers soothe their little ones, and people wait for fitful sleep to come.

“It can’t go on like this,” said Oksana Kabachenko, a 27-year-old mother of two who has been hiding for days in a makeshift subterranean shelter in the city center. “We are Ukrainians. We are civilians. We just want to live in our homes.”

Even now, more than a month into Russian President Vladimir Putin’s invasion, an air of disbelief hovers like smoke. This is a largely Russian-speaking city, only 25 miles from the border; one of Putin’s main pretexts for the invasion was that Ukraine’s Russian speakers needed protection.

Instead, the city became a prime target, among the first areas in the country to be subjected to large-scale bombing of densely populated civilian neighborhoods, a tactic that is now a dominant component of the Russian military campaign.

“It’s not just a war, this is a massacre,” Kharkiv’s mayor, Ihor Terekhov, said on Telegram after Russian forces began savaging the city with missiles and artillery fire.

So vast is the scope of the destruction that Ukrainian officials have likened it to Stalingrad (now Volgograd), the Soviet city that was besieged by the Germans in 1942-43. The city’s defenders prevailed, though at a cost of 40,000 civilian lives, and the battle remains a source of immense pride to Russians.

In Kharkiv, Ukrainian officials like to posit, it is the Russians who will face a humiliating defeat. Ukrainian troops and volunteers have managed so far to repel feints by Russian ground forces — leading to fears that the invaders will attempt, from a distance, to simply pulverize the city into submission. In a single 24-hour period ending Friday, city officials counted 55 hits by rockets and missiles.

Lying at the confluence of three rivers, Kharkiv has for centuries been a hub of industry and transport. But it is also a center of science, education and culture, a city that cherishes its poets and artists, as well as its museums and monuments.

And its musicians. A concert cellist, Denys Karachevtsev, has been staging elegiac performances among the ruins — a Bach cello suite, Ukraine’s national anthem — and posting videos of them online, saying he wants to inspire his fellow citizens to imagine Kharkiv rebuilt.

“I love my heroic city,” he wrote on Facebook.

In homes fortunate enough to have power, residents conceal their lights at night behind makeshift blackout curtains. Metal “hedgehogs” — tank obstacles constructed of angled beams — glimmer in the beams of dimmed car headlights. The darkness can be filled with deafening blasts or eerie silence. 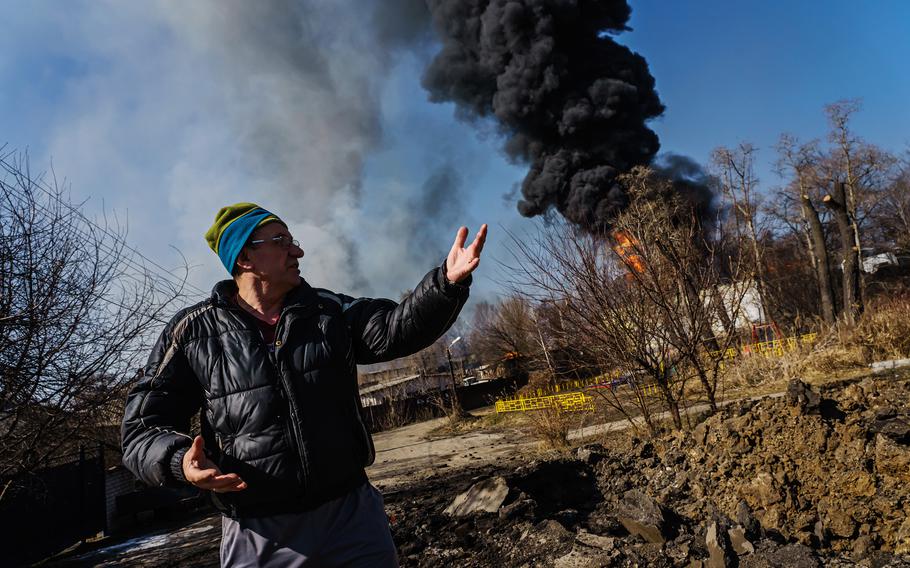 Every dawn illuminates weeks-old wreckage, as well as fresh destruction.

On Friday, gruesome scenes marked the aftermath of an airstrike the day before in the city’s east-central Moskovskyi district. Outside a post office-turned-aid distribution center, which was struck Thursday as dozens of people waited in line for supplies, a frozen pool of blood, part of a severed human hand and a bloodied cigarette could be seen. Plumes of smoke filled the sky.

In another eastern district, Nemyshlianskyi, a nine-story building was still standing after being hit by bombardment some days earlier. Neighbors said the four who were killed there included an 8-year-old; people were still living in units that escaped major damage.

Inside one of the burned-out apartments, a child’s bicycle leaned against scorched concrete. In the bedroom was a teddy bear; on the floor, the pages of a picture book were crisped and sooty. The kitchen was intact but blackened by flames. In the corner, a picture-tube TV was melted.

In another kitchen, a wall inscription read “Morning loves Arina.” A top-floor unit was filled with books, not all of them burned. 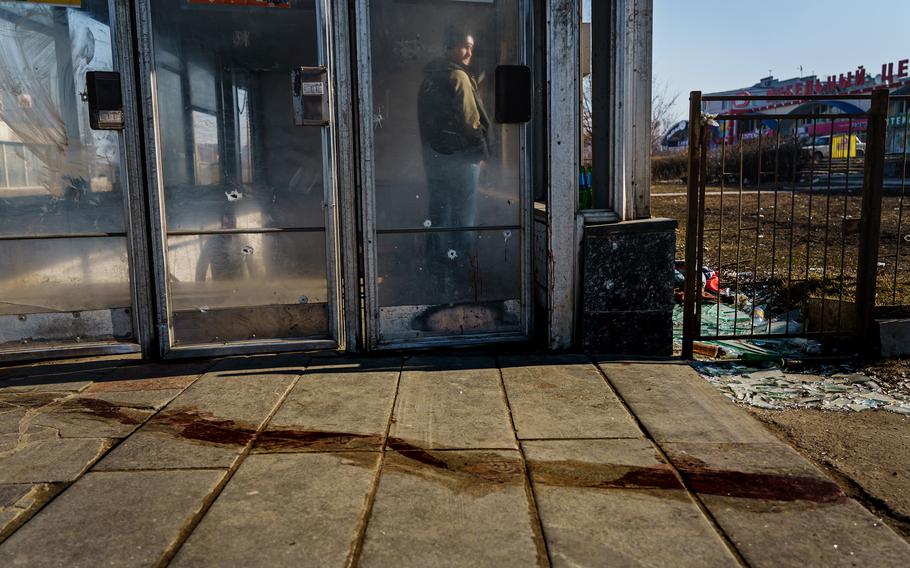 A pool of blood is streamed in front of the entrance to the subway in the Moskovskyi district of Kharkiv, Ukraine, on Friday, March 25, 2022. (Marcus Yam/Los Angeles Times)

At the city’s Hospital No. 7, near a neighborhood called Saltivka that has been under near-constant barrage, beds lined the corridors; an indirect hit had shattered windows. The 280 beds were dedicated to the war-injured; patients suffering other ailments were turned away.

One patient, 50-year-old Viktoria Rusanova, said she hoped to regain use of her shrapnel-pierced leg. She was walking near her mother’s house in Saltivka when a Russian shell landed, wounding her and wrecking the structure. Her mother was pulled from the ruins alive.

Before the war, Rusanova worked in a grocery store, now demolished.

“Nothing to go back to,” she said.

Vitaliy Sukharev, 39, was also hospitalized. He was in a car when he was hit by gunshots. The power was out at the hospital when he arrived, so medical staff carried him up seven flights of stairs. He was one of the fortunate ones.

“Luckily, we had generator for surgery!” said Kozyryev Aleksandr, the deputy medical chief.

Sukharev liked fixing up cars before the fighting. Now he wonders if there will be anywhere to drive them.

“We have to rebuild all the roads here in Kharkiv and in Ukraine,” he said.

Kharkiv’s sprawling Barabashovo market once claimed to be the biggest in Eastern Europe. It was ravaged by bombardment, as if a swift, cruel storm had gusted through its alleys. A few fires smoldered Friday. Shattered shops were littered with damaged wares: cracked ceramics, burned teapots.

A few men were loading salvaged items into a beige Lada with two bullet holes in the windshield. 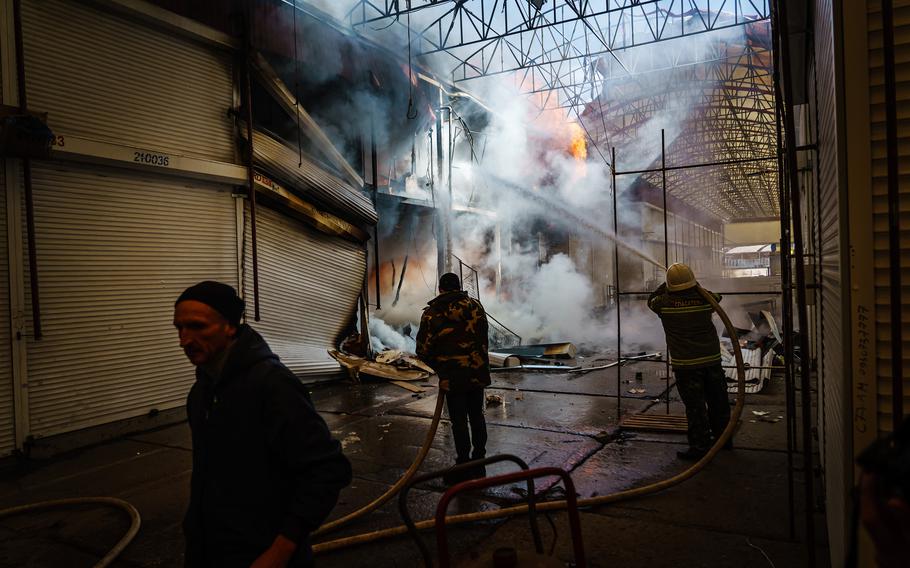 At Kharkiv National University — premier among the city’s dozens of colleges — an administrative center was crushed. Only the front facade with three large window frames remained standing, offering a triptych-like view of the ruined interior. Firefighters were clearing the rubble.

In the subterranean world where many of those remaining in the city spend their nights, an overture of snores could be heard at a subway station on the city’s western side.

Some slept on a platform as cold as ice. Others bedded down in subway cars and stretched out on benches where commuters once awaited trains, even nesting in piles of donated clothing. A windowsill held carefully arranged supplies: mouthwash, toothbrush, chewing gum, sanitizing wipes.

In the eastern district of Rogan, at least 50 people took refuge in a freezing cellar after their neighborhood was cut off from the rest of the city three weeks ago by heavy bombardment. A 64-year-old woman named Galina Dmitrievna Kuka said her home, and those of all her neighbors, had been destroyed.

“My life is now divided into before the war and after war,” Kuka said. “I don’t want another person to experience anything like this. I feel like I have lived half the life that I had before, in just this month alone.”

Conditions in the cellar are primitive: People use tied-together tree branches as insulation on the bare floor, with salvaged bedding piled on top. They have only candles for light. They drink water from a leaky pipe.

When the bombs fall, the walls shake. Sometimes gunfire rings out. From below ground, trembling families hear heavy vehicles moving above; whether their own or the enemy’s, they cannot know.

(Yam reported from Kharkiv and King from Washington.)