How Russia has revived fears of nuclear war in Europe 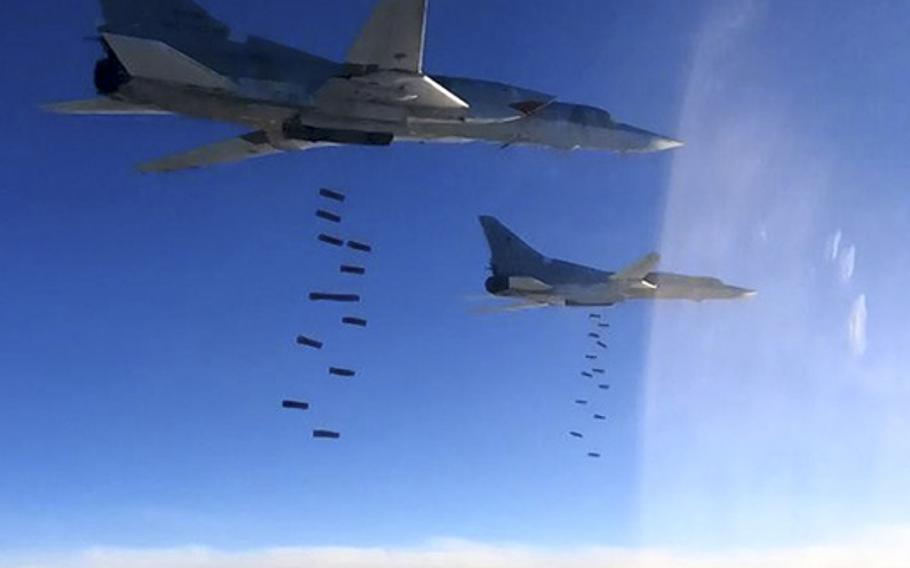 Two days after his troops invaded Ukraine, Putin put Russian nuclear forces onto a “special regime of combat duty.” It was unclear how that changed the status of those forces, but it followed his warning that any nation that interfered with the invasion would suffer “consequences that you have never experienced in your history.” (Russian Defense Ministry Press Service via AP)

Not since Cold War showdowns such as the Cuban Missile Crisis of 1962 -- when the U.S. and the Soviet Union came close to full-scale confrontation -- has the risk of nuclear warfare been as high as now. With Russia’s invading Army struggling and suffering heavy casualties in Ukraine, President Vladimir Putin’s saber-rattling about his nuclear arsenal is being taken with grave seriousness. An openness to introduce nuclear weaponry to an otherwise conventional war is a distinctive part of Russian military policy, raising fears that the war in Ukraine might lead to the first use of a nuclear weapon since the U.S. showed the world its destructive power in ending the Second World War.

1. What sparked worries about nuclear conflict?

Two days after his troops invaded Ukraine, Putin put Russian nuclear forces onto a “special regime of combat duty.” It was unclear how that changed the status of those forces, but it followed his warning that any nation that interfered with the invasion would suffer “consequences that you have never experienced in your history.” Russian Foreign Minister Sergei Lavrov added a warning of his own, that a third World War would involve nuclear weapons. Most recently, a Kremlin spokesman, Dmitri S. Peskov, said in an interview with CNN that nuclear arms could be used in the event of “an existential threat for our country.” Beyond the rhetoric, Russia has worked to revamp its nuclear weapons program, its military exercises frequently involve its nuclear arsenal, and Russian military doctrine contemplates introducing nuclear weapons into conventional battle if they’re considered necessary.

2. How does a nuclear strike fit into Russia’s military doctrine?

Known as “escalate to de-escalate,” the Russian strategy leaves open the possibility of using a so-called tactical nuclear weapon to change the course of a conventional conflict that it’s at risk of losing. Since 2000, according to Global Security Review, every publicly released Russian military doctrine has allowed for nuclear weapons use “in response to large-scale aggression utilizing conventional weapons in situations critical to the national security of the Russian Federation.” Should Russia take this leap beyond conventional weapons, experts suggest it could choose to strike in the sea or in an open area first, to serve as a warning that opposing forces must surrender. A nuclear attack against Ukraine could be an effort to force President Volodymyr Zelensky to immediately surrender under terms acceptable to Putin.

Broadly speaking, the term refers to a nuclear weapon with a lower-yield warhead and a shorter-range delivery system compared with “strategic” nuclear weapons like those the U.S. and Russia could use in an all-out nuclear war. A tactical nuclear weapon could be used in Ukraine without posing a direct threat to American soil. How the U.S. and its allies would respond to such an attack is unclear.

4. What options would be on the table?

Because Ukraine isn’t a member of the North Atlantic Treaty Organization -- Putin has demanded that it promise never to become one -- the U.S. and its allies have no formal obligation to come to its defense against attacks. But the West would be under great pressure to respond in some fashion to a nuclear attack on Ukraine. NATO countries “would most likely respond on the grounds that the impact of nuclear weapons crosses borders and affects the countries surrounding Ukraine,” writes Patricia Lewis, director of the International Security Programme at Chatham House. A Western response could take the form of conventional forces attacking Russian strategic assets or a tit-for-tat use of a nuclear weapon. The U.S. has about 150 B-61 nuclear gravity bombs stationed in five NATO countries, according to Lewis: Belgium, Germany, the Netherlands, Italy and Turkey. Two other NATO members, the U.K. and France, are known to have nuclear weapons of their own.

At the end of the 1980s, the U.S. and the Soviet Union had thousands of tactical warheads deployed aboard naval vessels and on aircraft. In 1991, the two nations withdrew most of these weapons from their arsenals. Yet Russia is believed to have retained as many as 2,000 warheads, dwarfing the few hundred possessed by the U.S. Unclassified reports show that Russia has a variety of delivery systems that can carry nuclear warheads to shorter ranges.