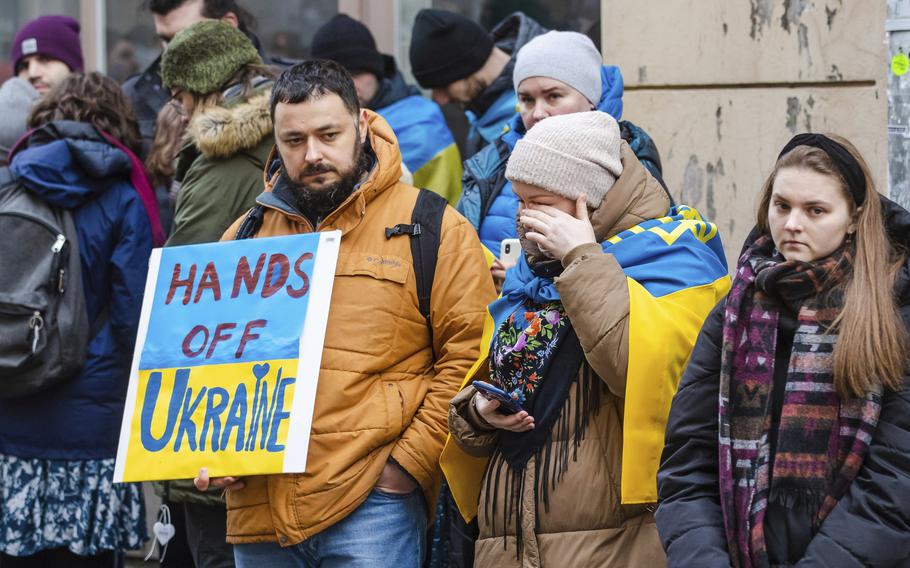 People including Ukrainians, take part in a demonstration in support of Ukraine, outside the Russian Embassy in Tallinn, Estonia, Thursday, Feb. 24, 2022. Russia launched a wide-ranging attack on Ukraine on Thursday, hitting cities and bases with airstrikes or shelling, as civilians piled into trains and cars to flee. Ukraine’s government said Russian tanks and troops rolled across the border in a “full-scale war” that could rewrite the geopolitical order and whose fallout already reverberated around the world. (Raul Mee/AP)

The Estonian government pledged to invest in roads, schools and jobs in the nation’s largely Russian-speaking northeast in a show of support for a region that the invasion of Ukraine has put under the microscope.

Prime Minister Kaja Kallas traveled to the Russian-speaking city of Narva in Ida-Virumaa, a region that has trailed behind other areas in reaping the advantages of Estonia’s 2004 entry into the European Union and the adoption of the euro eight years later.

Kallas said the Baltic country needs to be prepared for difficult times ahead, as the war in Ukraine and sanctions against Moscow will have economic knock-on effects for communities along the EU’s border with Russia.

“The situation clearly affects our economy, jobs, and our ability to get by,” she said at a press conference Tuesday after meeting local business owners, students and lawmakers in Narva, which lies across a river from the Russian city Ivangorod.

With support for Ukraine soaring among Estonians, Kallas’s government banned access to Russian TV channels and news websites, which have been criticized for spreading Kremlin propaganda but are popular with Estonia’s 100,000 Russian citizens and 70,000 Russian-speaking residents with undetermined citizenship.

That has helped Kallas revive her previously flagging political support, with her center-right Reform Party retaking the mantle of most popular party in opinion polls following Russia’s invasion of Ukraine lat month. Former Prime Minister Juri Ratas’s Centre Party, which in the past fostered ties with Russia, has seen its popularity plummet.

While Ida-Virumaa is home to Estonia’s main power plants and manufacturers, it ranks as one of the worst-off regions in terms of poverty, unemployment and life expectancy.

Kallas and her ministers pledged to widen a single-lane highway that connects the region to the capital, provide more EU funds, and invest 70 million euros ($77 million) in schools.

The government also plans to improve Estonian language skills for students who aren’t fluent, which causes a cultural divide with the rest of the country and hurts career prospects. In 2007, Estonian Russian speakers clashed with police in protests over the removal of a Soviet war memorial from central Tallinn.

Kallas said businesses in the region may also need to shift their activities away from Russian partners, not only because of EU sanctions.

“Companies brought up concerns in relation to the sanctions, but generally the understanding was that Russia is not a trustworthy partner and new business models need to be found,” she said.