Last week, his life was snuffed out by Russian President Vladimir Putin’s onslaught in Ukraine, according to a foundation memorializing Nazi crimes. Romantschenko, 96, was killed when a Russian missile struck his apartment building in Kharkiv.

“It is with horror that we report the violent death of Boris Romantschenko in the war in Ukraine,” read a statement on the website of the Buchenwald and Mittelbau-Dora Memorials Foundation. The foundation said it learned of the elderly man’s death from his son and granddaughter.

Romantschenko’s “horrific death,” the statement continued, “shows how threatening the war in Ukraine is for concentration camp survivors.”

Boris Romantschenko survived the concentration camps #Buchenwald, #Peenemünde, #Dora and #BergenBelsen. Now he has been killed by a bullet that hit his house in #Charkiv, #Ukraine. He was 96 years old. We are stunned. pic.twitter.com/ZZIK2OdbAu

The foundation, along with numerous others, established an aid network distributing food and medicine to Ukrainian victims of Nazi persecution. Ukraine is home to about 10,000 Holocaust survivors, according to an American nonprofit, The Blue Card, that provides financial assistance to indigent survivors in the United States.

Romantschenko was born in 1926 in Bondari, near the city of Sumy in northern Ukraine. In 1942, he was deported to the German city of Dortmund, where he became a forced laborer, according to the Buchenwald foundation. When he tried to escape, he was captured and sent to Buchenwald, near Weimar in central Germany, in January 1943.

He would later be sent to Peenemünde, a military research center, where he participated in the construction of the V-2 Rocket, the world’s first long-range ballistic missile. Other places he was detained included Dora-Mittelbau, originally an appendage of Buchenwald, and Bergen-Belsen, a camp in northern Germany that started out as a site holding prisoners of war and in 1943 became a concentration camp.

In its statement, the foundation did not describe how Romantschenko survived Bergen-Belsen, which was liberated in April 1945 by the British 11th Armored Division, or what he did after the war. For many years, though, he served as vice president for Ukraine on an international committee for Buchenwald survivors. In a ceremony in 2015, he recited an oath in Russia spoken by survivors of the camp, which has become known as the Oath of Buchenwald. It concludes with a pledge: “To build a new world of peace and freedom is our ideal.”

As of Sunday, 2,421 civilian casualties have been recorded in Ukraine by the United Nations, including 925 deaths. Over the weekend, media in Kharkiv quoted authorities saying 266 people, including 14 children, had died in the city. 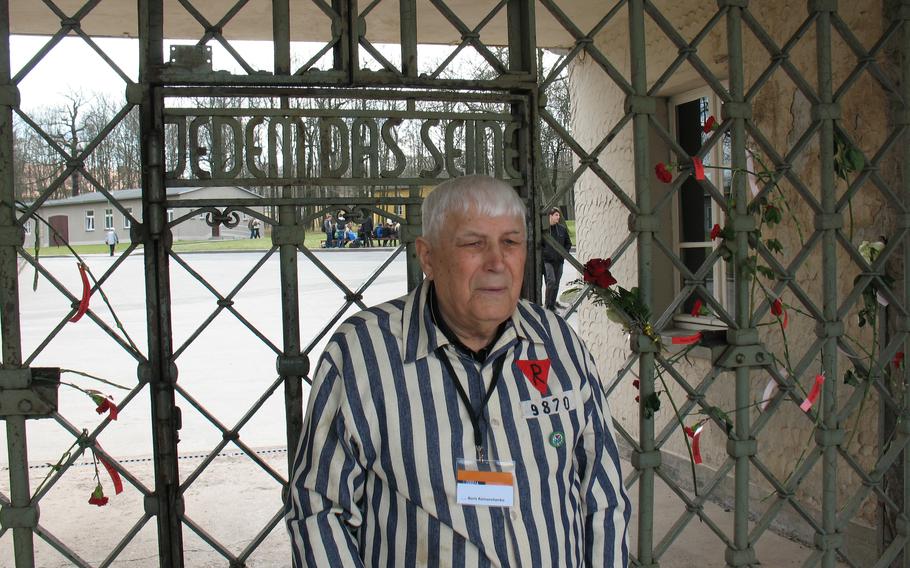