Russia has a long history of lying about biological weapons 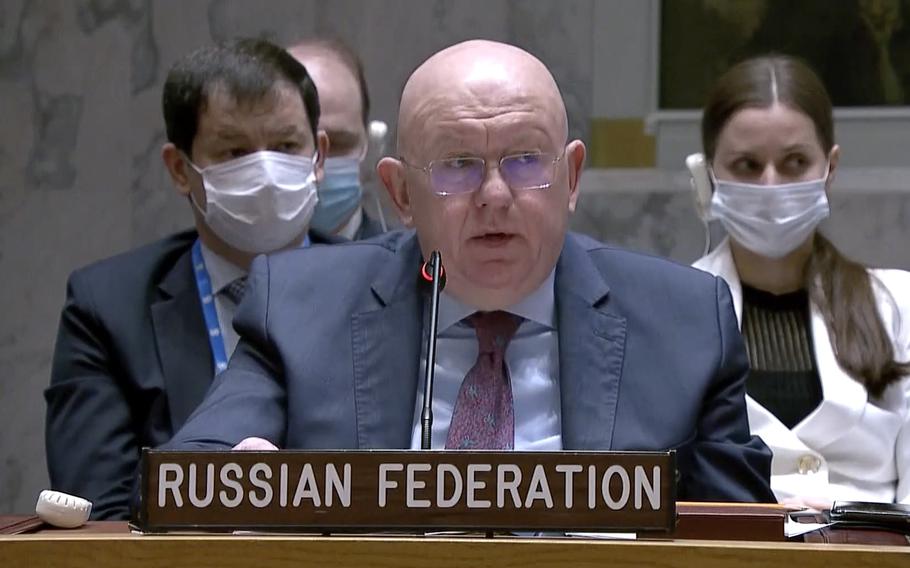 At a meeting of the United Nations Security Council on Friday, Russia repeated its charges that the United States has been conducting a biological weapons program in Ukraine. The suggestion, previously raised by Russia, at a Security Council meeting on March 11 — is outlandish.

As Linda Thomas-Greenfield, the United States’ U.N. ambassador, has rightly put it, Russia is abusing the Security Council in order to “legitimize disinformation and deceive people to justify Russian President Vladimir Putin’s war of choice against Ukraine.”

That has not prevented the claim from being picked up by some conservative political commentators, including Fox News’s Tucker Carlson, whose segments on the topic are then shown on Russian state television.

In fact, the U.S. Biological Threat Reduction Program — alluded to in these accusations — was initially aimed at converting Soviet era labs associated with its offensive bioweapons programs to peaceful purposes; the program also has ensured that public and veterinary health labs receive funding to improve their biosafety (ensuring the safety of lab personnel and local populations) and biosecurity (ensuring that dangerous pathogens are protected against theft or misuse). Under the Global Partnership Against the Spread of Weapons and Materials of Mass Destruction, similar support has been provided to former Soviet republics as well as to countries in Africa and Asia by countries including Canada, Germany, Britain and Finland.

The false charges fit a long lamentable pattern that stretches back to the early years of the Cold War. In 1951 and 1952, for example, the Soviet Union asserted that the United States was using biological weapons in the Korean War — a claim that it knew at the time to be false, as Soviet documents eventually made public in the late 1990s made clear. The Soviet Union also covered up an open-air bioweapons trial involving smallpox, in 1971, on Vozrozhdeniye Island, in the Aral Sea, that accidentally infected members of the ship’s crew. In 1979, an accident at a bioweapons facility producing anthrax in Yekaterinburg led to some 60 deaths in the local population — an outbreak the Soviet and subsequent Russian government attributed to contaminated meat.

In the post-Soviet era, Russia has taken every opportunity to make bogus allegations about Western (and especially U.S.) chemical and biological activities in third countries. Such attempts are almost certainly intended to divert attention from Russia’s own highly questionable activities in the biological and chemical-weapons realm. Today, for instance, Western governments fear that the lies could be used as cover for, or supposed justification for, a chemical or biological attack by Russian forces in Ukraine.

After the collapse of the Soviet system, Russia right away used false charges to derail early attempts to monitor, and dismantle, bioweapons capabilities dating to the Soviet era. In 1989, Vladimir Pasechnik, a key researcher in a secret Soviet biological weapons, defected to Britain. The information he brought with him set in motion events that culminated in the United States, Britain and Russia signing a joint statement on biological weapons known as the trilateral agreement in 1992.

The agreement’s primary purpose was to enable the Russians to demonstrate that the large offensive bioweapons program inherited from the Soviet Union had been dismantled and its facilities and personnel redirected to peaceful purposes. Part of this process entailed visits to nonmilitary and military biological facilities in Russia as well as the United States and Britain. But as discussions moved toward arrangements for visits to military facilities, Moscow balked. Suddenly, it claimed that it had concerns about U.S. military medical laboratories in Africa, Asia and Latin America; none of these had anything to do with biological weapons. Russia insisted that it would need access to these laboratories.

With British support, the U.S. quite properly argued that the labs mentioned by Russia were not relevant to the trilateral agreement. For this and other reasons — Russia also kept investigators from fully exploring its own sites — the agreement ran aground and petered out in 1996. The Russian allegations served their purpose in this case, preventing U.S. and U.K. experts from learning firsthand about the biological facilities run by the Russian Ministry of Defense.

Russia has continued to make spurious and unfounded allegations about U.S. labs in third countries. One particularly outrageous falsehood concerns the Richard Lugar Center for Public Health Research in Tbilisi, Georgia, which opened in 2011. This is the first Biosafety Level 3 laboratory — one qualified to study infectious agents or toxins that may be transmitted through the air — established in the region; it serves both Georgia and the wider area. The lab provides detection and diagnostic capacities for endemic and exotic diseases, such as dengue or chikungunya, and is equipped to conduct bio-surveillance on tularemia, anthrax and other diseases that can leap from animals to humans.

Russia has asserted that the United States is running a clandestine offensive bioweapons program at the Center. For its part, Georgia has hosted a visit of international experts to the lab. In 2018 Georgia specifically invited Russia to send its own expert, Moscow declined. Tellingly, Russia has never made use of the various formal procedures under the Biological and Toxin Weapons Convention for raising compliance concerns. It prefers instead to trumpet its wild unsupported accusations in public.

No one should believe for a second that Russia is genuinely motivated by a desire to stamp out the use of chemical and biological weapons. Russia has defended the Assad regime in Syria against international efforts to hold that government to account for Syria’s extensive use of chemical weapons against its own people: Russia, for instance, undermined efforts by the United Nations to investigate Syrian chemical weapon use, and contested the investigation’s findings; it behaved similarly when the focus of international investigations moved to the Organization for the Prohibition of Chemical Weapons.

We have also seen the botched attempts by Russian military intelligence to murder former Soviet spy Sergei Skripal in Salisbury, Britain, and Russian opposition leader Alexei Navalny with nerve agents (“novichoks”) developed during the Cold War by the Soviet Union. In the Skripal case, Russia denied responsibility and blamed others, claiming among other things that novichoks had in fact been independently concocted in various countries, and Britain surely had some. The Russian lie factory even claimed that Britain may have orchestrated the attack to distract from the failures of Brexit. And of course Russia denied that Navalny had been poisoned.

When it comes to claims about chemical and biological weapons programs in other countries, Russia has a long record of abject dishonesty. Nothing about the bogus claims regarding biological weapons in Ukraine should surprise us. Just why Russia persists with this behavior is far from clear. Perhaps Putin and his senior advisers actually believe their own propaganda. Perhaps they believe the rest of the world acts with as much disregard for international legal prohibitions on forbidden weapons as they do.

John R. Walker served in the U.K foreign and commonwealth offices arms control and disarmament research unit from 1985 to 2020.