Will the war in Ukraine change America's political landscape? 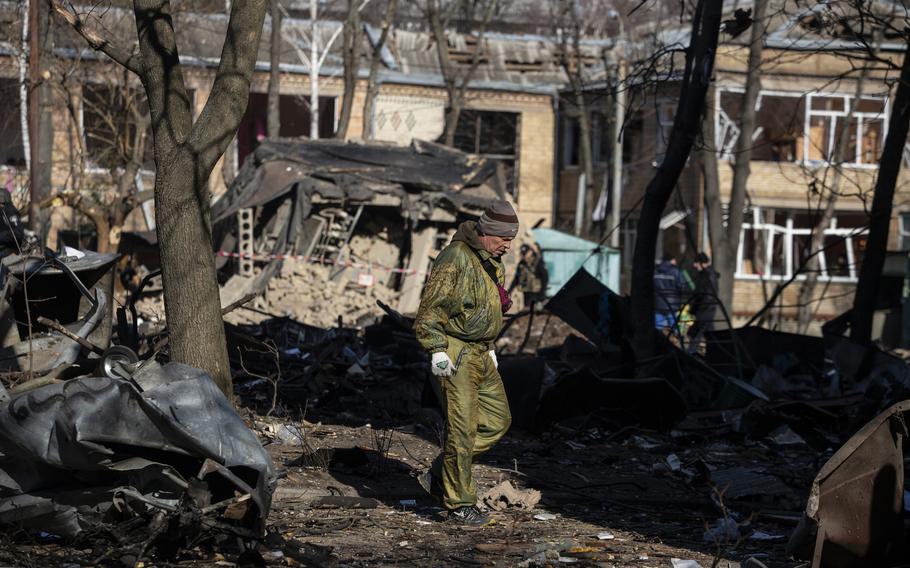 The site of a bombing that damaged residential buildings in Kyiv, Ukraine. (Heidi Levine for The Washington Post)

WASHINGTON - The war in Ukraine has unsettled American politics. The degree to which it is changing American politics is the more consequential question for President Joe Biden and the Democrats.

Russia's brutal and unprovoked aggression against its sovereign neighbor has refocused the world. Ukrainian President Volodymyr Zelensky has become a figure of international acclaim and admiration. Russian President Vladimir Putin has become an international pariah. NATO has been rejuvenated and the United States is once again leading the Western alliance.

How much does that matter to American voters and how much will it matter in the November midterm elections? Today, inflation and other domestic issues remain the main drivers of the upcoming elections. One change the war has brought is that it has frozen the political environment at home and placed some issues - gas prices specifically - into a more-than-purely-domestic context.

We know from scatterings of recent history that at this stage of a conflict like the one that continues to unfold in Ukraine, projections months into the future are risky to foolhardy. Surprise is one certainty of politics.

Wars that directly involve U.S. forces often produce a rallying effect for the president. When the United States launched a war in early 1991 to eject Iraq from Kuwait, President George H.W. Bush saw his approval ratings soar to close to 90%. Two years later, he had lost his bid for reelection and was out of office.

After the United States responded strongly to the attacks on Sept. 11, 2001, President George W. Bush's approval ratings slightly eclipsed his father's levels. Republican candidates rode his anti-terrorism message to a successful midterm election the following year. Views about the war in Iraq had not shifted enough to prevent Bush from winning reelection in 2004, but by 2006, opposition to the war contributed heavily to the Democrats' takeover of the House.

This war is different. Biden has built and led an international coalition that has slapped punitive sanctions on Russia and come to the aid of Ukraine with continuous shipments of weapons and open doors to now millions of refugees fleeing the destruction. He has called Putin a war criminal but has resisted steps that he says could lead to a wider war. No U.S. troops have been committed, and Biden has said that will not change. Still, Putin is unpredictable, and so, too, could be the course of the conflict and possible ways it ends.

The war in Ukraine has brought Americans closer together on some things; call it the Putin effect. At a time of division at home, Putin has given Americans a common enemy and a sense of collective purpose. Big majorities of Republicans and of Democrats believe that cooperation with U.S. allies is the right posture, according to the Pew Research Center. A similar pattern emerges on the decision to impose sanctions on Russia, with more than 8 in 10 in each party supporting the continuation of those measures.

Republicans have scurried away from the views expressed by former president Donald Trump, who had praised Putin as a "genius" as the war was taking shape. The party's elected leaders quickly saw the foolishness of trying to accommodate that view. Putin has shown himself for what he is, and many of Trump's acolytes have sought cover. While still not willing to criticize Trump, many have denounced Putin: House Republican Leader Kevin McCarthy, R-Calif., called him "a thug."

Some Republicans have been pushing Biden to take even more aggressive action to support Ukraine, along the lines of Zelensky's requests for jet fighters or more sophisticated antiaircraft weaponry. There are indications that rank-and-file Republicans are more supportive of these kinds of steps than are Democrats.

As the country's leader, Biden could benefit from the broad consensus about Putin's war. But support for how Biden is handling the war does not yet translate into greater support for Biden himself. More Americans approve of the U.S. response than disapprove, according to the Pew survey, though there are clear partisan differences on that question. Those underlying divisions may be a proxy gauge of the domestic political impact, or lack thereof, to date.

The president has gotten no noticeable bump in his approval ratings. That could change, of course. At best, his approval ratings have ticked up a point or two, but some strategists say the reason is that he has brought back to his side some Democrats who were unhappy with him because of what didn't happen with his domestic agenda last year. He is solidifying his base but apparently not yet moving others. His overall approval rating remains net-negative by low double digits. Historically, such numbers have put the president's party in dangerous territory going into midterm elections.

Inflation still rules as the overriding issue in domestic assessments of the state of the country, and both sides know it. A message war is now underway over the price of gasoline. From the White House, the phraseology is "Putin's price hikes." From the Republican quarters, those higher prices are Biden's and his alone, even though it's clear that the most recent spikes are war-related. Still, the burden will fall on Biden if prices remain high through the summer, as could be the case.

More than gas prices are causing voter angst. It's prices generally. The Federal Reserve raised interest rates this past week as a step designed to slow down the rise in prices. Whether that and future rate increases will override the impact of new supply chain disruptions caused by the war (on top of those caused by the pandemic) and wage growth in a tight labor market is the challenge for the Fed.

The administration has changed its messaging on other aspects of its domestic agenda. Biden still wants to enact pieces of his "Build Back Better" agenda that ran aground in the Senate thanks to united Republican opposition and the resistance from Sen. Joe Manchin, D-W.Va., in particular. But this would come piecemeal if at all, and the president and his allies now speak about those proposed policies as ones that will help to lower prices.

Biden gave his State of the Union address nearly three weeks ago. He drew bipartisan support for what he said about Ukraine, but the bulk of the speech was devoted to domestic issues, and partisan divisions were evident throughout. The speech was seen as a pivot away from the kind of rhetoric that dominated last year, that of a transformational president seeking big and ambitious spending programs, to a more modest agenda and more talk of unity. In an age of short memories, the State of the Union has quickly faded.

The administration's challenges are now in split-screen. There is the care and feeding of the international coalition trying to help Ukraine resist and fight back against the Russians, a management task of significant and nearly full-time proportions. And there is the set of domestic issues that remain on the president's plate, from making the transition from pandemic to endemic in the battle against the coronavirus to showing results in the battle against inflation and keeping the economy healthy. Dealing with the first will be essential to the well-being of the world. Dealing with the second will be a telling indicator of what happens in November.