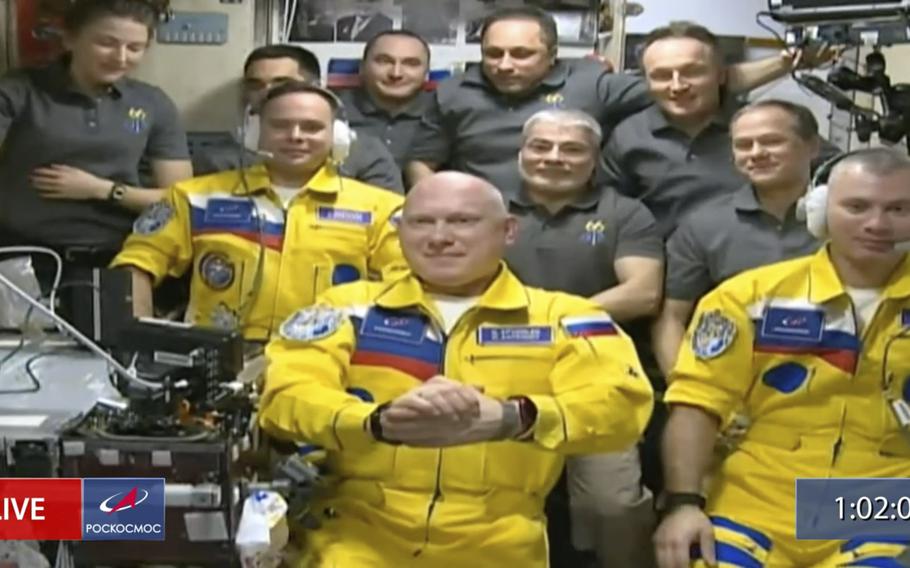 A video screen grab show Russian cosmonauts Sergey Korsakov, Oleg Artemyev and Denis Matveyev during a welcome ceremony after arriving at the International Space Station, on Friday, March 18, 2022, the first new faces in space since the start of Russia’s war in Ukraine. The crew emerged from the Soyuz capsule wearing yellow flight suits with blue stripes, the colors of the Ukrainian flag. (Roscosmos)

Three Russian cosmonauts blasted off from Earth on Friday morning for the International Space Station and emerged from their Soyuz rocket a little over three hours later - all wearing yellow flight suits with blue stripes and accents, the colors of the Ukrainian national flag.

On a live stream set up by Russian space agency Roscosmos, the three cosmonauts - Oleg Artemyev, Denis Matveyev and Sergey Korsakov - could be seen entering the space station one by one, floating in the zero-gravity environment, and hugging the seven astronauts who were already in orbit. Their bright yellow clothing also includes two patches of blue, white and red - the colors of the Russian flag - on the arm and chest.

Shortly after reaching the International Space Station, the trio spoke to callers on the phone, including with family members who wished them a successful mission. When asked by a caller about their clothing choice, Artemyev responded that each crew is allowed to pick its own colors from a stock supply of equipment.

"We actually had a lot of yellow material, so we had to use it," Artemyev explained. "So that's why we had to wear yellow."

Russia's space force also denied that the color was meant to reflect the Ukrainian flag. It said the uniform's design reflected the colors of Bauman Moscow State Technical University, where the cosmonauts studied.

The three Russians' sartorial decision triggered discussions on social media about whether it was a deliberate reference to the war in Ukraine, where Russian forces have unleashed torrents of artillery fire, missiles and bombs over the past three weeks. Russian President Vladimir Putin has controversially tried to justify the offensive by claiming that it was launched to "de-Nazify" Ukraine.

Space enthusiasts and observers were particularly keen on knowing whether the suits are meant as support for Ukraine, because Russian authorities have cracked down on antiwar sentiment since late February. The Kremlin has shut down independent media outlets, banned some social media platforms and punished activists who dare to speak out.

This has left little space for people in Russia to access stories of the mounting humanitarian crisis in neighboring Ukraine. Those who support Putin's invasion have also launched their own pro-war campaigns, including using the letter "Z" to signal their approval.

The trip to the International Space Station comes as escalating tensions between the United States and Russia strain the countries' space partnership. Dmitry Rogozin, the head of Roscosmos, threatened earlier this month to cut off the supply of Russian-made rocket engines used on rockets that fly supplies to the space station. But NASA leadership has dismissed the idea that the collaboration is fraying.

The Washington Post's Marisa Iati contributed to this report.