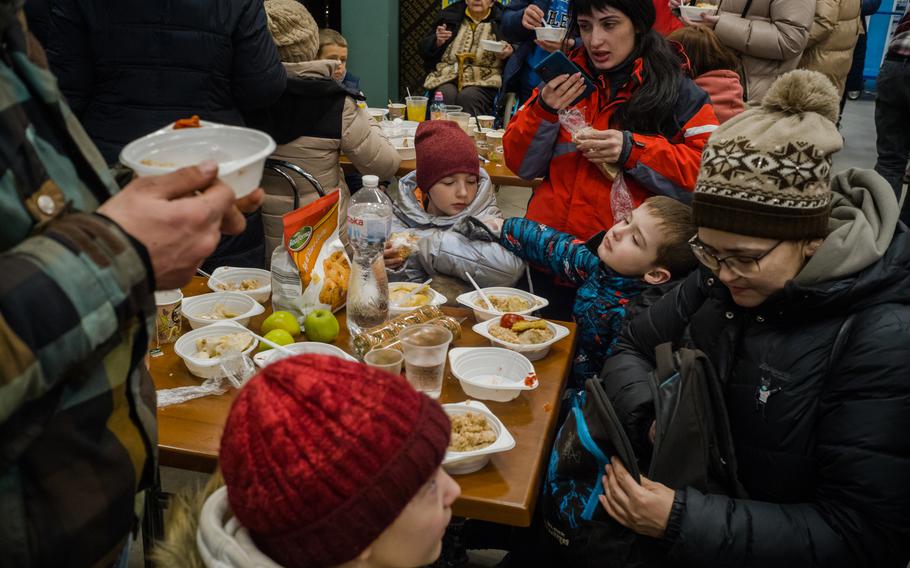 ZAPORIZHZHIA, Ukraine — Traumatized residents from Mariupol, Ukraine, arrived in a nonstop stream of cars at a humanitarian aid station on Friday describing urban fighting and devastation as Ukrainian forces appeared to lose their grip on parts of the battered city.

They arrived in a near-constant convoy at the city of Zaporizhzhia, 140 miles to the northwest, their vehicles marked with white flags and signs reading “children” in the hope that it would ease their way.

Some families drove cars with their windshields smashed out or shattered from the force of explosions near their homes. One car, struck in a rocket attack, looked as if it had defied the odds by being able to move at all, one side completely punched in by the impact.

But with vehicles the only way out, anything that could move was put to use. Some were crammed eight or nine people to a car.

Their accounts provide a glimpse of the situation on the ground in a city that has been cut off from communications for more than two weeks.

Those fleeing spoke of weeks spent trapped in their basements with little to eat and no electricity or water. They painted a picture of a city that is no longer fully controlled by Ukrainian forces, with Russian tanks spotted in the streets. 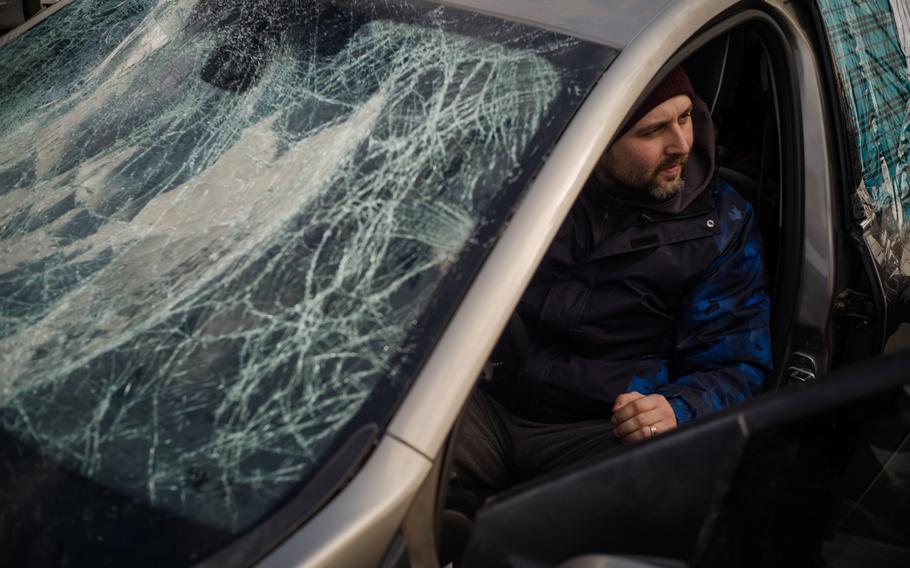 A man shows up to the registration center in Zaporizhzhia, Ukraine, with his car windshield smashed by a rocket blast. (Wojciech Grzedzinski/The Washington Post)

Mariupol, where besieged Ukrainian forces have held out for weeks, is considered an important strategic prize for Russia, a land link from annexed Crimea to areas of eastern Ukraine held by Russian-backed separatists. And residents fear that Putin will throw all the fire power he has at it.

“It’s like a horror movie. There’s nothing,” said Oksana, who left with her three sons, her sister, brother-in-law and two nieces. “Everything is bombed, all the roads are bombed. We couldn’t even normally drive out. We drove a lot in circles before we found a route.”

Oksana had fled her home on the city’s periphery for a friend’s home closer in on Feb. 24, the first day of the war, to escape the bombing on the outskirts.

The 37-year-old, who spoke on the condition her last name be withheld to protect relatives left behind, said Russian tanks parked next to the house in which they were sheltering on Wednesday.

“We asked them to take them away,” she said. “We’d written on our houses there are kids here, people here. But they did not do it.”

The tanks fired all night, she said. The force of the shelling shuddered through the house.

Russian soldiers entered the house to check documents, according to family members, and told them to mark their cars with white flags if they left to show they were civilians. When they drove out of the city, they said, they did not see any Ukrainian forces.

They followed the direct road, rather than the agreed-upon corridor through the city of Berdyansk to the city’s west, because they couldn’t navigate to that route. They said soldiers at most of the Russian checkpoints were friendly, with some on the way out of the city giving away cookies and other sweets.

At one checkpoint, though, Russian soldiers took issue with a message on her brother-in-law’s phone describing destruction in a village outside of Mariupol. They said soldiers forced him out of the vehicle with a gun to his head.

“They took him off, and then we just heard a gunshot,” Oksana said. “We thought that was it. When we saw him we started crying from happiness.”

They counted themselves among the lucky ones: The house they were sheltering in was near a well, so they had some water supply. And they did not run out of their stockpiled food, though they cut back from three meals, to two and then one.

Oksana’s sister, Olya, 41, said she shook and cried with relief when she finally saw Ukrainian forces as she approached Zaporizhzhia.

Petro Andryushchenko, an adviser to the Mariupol mayor’s office, confirmed Russian tanks were in the city. “It’s difficult to say who is controlling what,” he said. “Mariupol is a battlefield. But we are still defending the city, and we aren’t giving up.”

He said one front line was now downtown, near a theater sheltering hundreds of civilians that was bombed by Russian forces Thursday.

Around 100 people have emerged alive from the theater bombing, Andryushchenko said. One elderly woman was badly injured and transported to a hospital. Andryushchenko said roughly 800 to 1,000 people were believed to have been in the building at the time of the attack. Some accounts put the number in the theater still missing as high as 1,300.

“How many people are beneath the rubble, we don’t know,” he said.

Maryna Selkova, 41, said the house in which she was sheltering, near the theater and university in the city center, was already on the front line on Wednesday evening. She could see members of the Azov Battalion, a far-right militia force which has made up a large contingent of Ukrainian front-line forces of the city.

“Our house was shaking,” she said, her 11-year-old son clinging to her neck.

They tried to leave several times, she said, but the fighting was too fierce. “It was so scary to come out, everything was exploding. We got back into the basement and tried again later.”

They finally escaped on Thursday morning. “The theater was already bombed when we left,” she said. “We understood then we couldn’t hide anywhere.”

Many had spent a night in the village of Tokmak, now controlled by the Russians, where residents have opened their doors and cooked them meals. Some arrived injured from explosions.

Denys, 37, had been drinking tea and eating pancakes cooked on a woodfire outside when a blast hit his yard Thursday. “It was like between my ears, something exploded,” he said. The side of his ear is sliced and swollen from flying glass.

His family had already fled on the first day of the war, when it was still possible, but the explosion spurred him to leave.

Some say they want to leave the country, but few had solid plans. They were relieved just to have made it out alive.

“I never thought in the 21st century I’d live through something like this,” said Selkova, an accountant. “Now we will have to start all over again.”

With vehicles the only means of escape, families are loading in as many people as possible. Nine members of Aleksei Vlasov and Alesya Vlasova’s extended family packed themselves into a single aging Ford Mondeo to escape. They packed the cat and their 21-year-old son’s two guitars, one acoustic and one electric, among the bundles on the roof.

They wanted to pick up Alesya’s 83-year-old grandmother, but drove to her home and couldn’t find her. There was no time to hunt.

Families said Russian soldiers at the checkpoints told them to delete any photographs of destruction in Mariupol. Many did, but Aleksei and Alesya decided to risk keeping theirs, and showed pictures of the smashed windows at their family home and their meals in the dark.

Aleksei, 35, would brave driving around the city each day in search of food. Some families said they turned to looting and bartering to survive.

Their cousin Anastasiya, 25, has served with the Ukrainian military for the past five years. She gasped as she pulled out her phone to a video message showing the flag of Russian-backed separatists being hoisted on an administrative building on the city’s Left Bank, which has been subject to some of the heaviest bombardment.

“That’s not the periphery, that’s the city,” she said. “Even if they lose the city, we’ll get it back.”